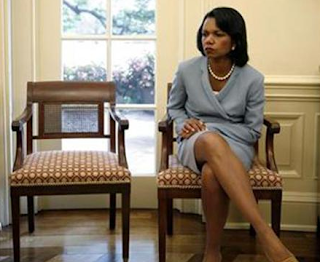 While she is arguably the most powerful black woman in America, her association with the crimes of the Bush administration makes it hard for me to view her with much respect. I often find myself referring to her as "that woman". It is astounding that in a racist, patriarchal, capitalist state that Ms. Rice has reached the level that she has. In my humble opinion it has come at a cost of her integrity. Rice has claimed that part of the reason that she supports the Republican party is because she is black. She credits the party for ending slavery and that is part of her justification.

Recently she once again decided to make her opinion known on the racial divide in America. According to Reuters UK Ms. Rice said, "There is a paradox for this country and a contradiction of this country and we still haven't resolved it." That has got to be one of the most honest things that she has deigned to utter in sometime. This was followed by, "We don't mimic the immigrant story. Where this conversation has got to go is that black Americans and white Americans founded this country together and I think we've always wanted the same thing."

That is where she lost me. She is quite right when she says that blacks should not be compared to immigrants, however the building of the US was not accomplished through the willing participation of blacks. America profited and grew on the backs of slave labor. Slavery is not a relationship between equal partners committed to the same goals. It is the oppression and exploitation of one group of people over another.

Considering the relations of power, how it is possible to suggest a common goal? There are whites today who will not even acknowledge racial privilege and blacks who continue to be stigmatized and marginalized. Perhaps from her class perspective wealth has been able to mitigate her oppression in terms of gender and race but many suffer through daily degradations at the hands of our so-called "partners". If one cannot even own privilege or understand the basic concept, why would the sharing of power even be an option? There is still the outstanding debt of 40 acres and a mule. No formal apology, or the election of a black president will immediately rectify the racial disparity. Blacks represent an internal colony in the United States, and until that is acknowledged and rectified, there can be no true partnership.
Posted by Renee at Sunday, May 11, 2008

Rice is one of the better republicans but to say she is republican because she is black is nuts. Sure Lincoln ended slavery but the republican party today is not what it was. It is about more government invasion, "family values", war, and certainly anti-equality viewpoints.

At the Republican convention she declared allegiance to the republican party because they were the ones responsible for the end of slavery.

Note, that this was one reason amongst many that I listed in my original post.

Her race and gender are irrelevent. What matters is her ties with big oil and the sleazy compromises that she has made because of those ties.

I concur that her behaviour in this administration has been horrible however her race and her gender are relevant. She is the highest ever ranking black female representative in US government.