Homosexuality In A Colonial Framework 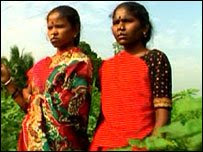 Wetka and Melka, have declared their love for one another in a marriage ceremony in the Indian district of Koraput. Homosexuality has been criminalized since India was a colony of England. The 1861 law states:

Whoever voluntarily has carnal intercourse against the order of nature with any man, woman or animal, shall be punished with imprisonment for life, or with imprisonment of either description for a term which may extend to ten years, and shall also be liable to fine.

Though the government does not prosecute these offenses there is still an extremely high level of homophobia in India. According to the BBC their tribes were not initially pleased with the pairs decision to marry. The villagers were concerned that they would not be able to support themselves without the help of men. Apparently due to the obvious love between the couple they were "forgiven". Wetka and Melka were ordered to pay a fine consisting of a barrel of country liquor, a pair of oxen, and a sack of rice and hosted a family feast.

By holding on to this dated statue, the Indian government is identifying with its colonial roots. Acts of homosexuality are no longer illegal in Britain. Despite an appeal lead by the Naz Foundation India Trust, in the, Delhi High Court challenging the constitutionality of this law, the Indian government continues to uphold this archaic prejudicial law. According to the ILGA the government response was as follows:

42nd and the 156th reports of the Indian Law Commission states that society does not approve of homosexuality and that therefore there is a justification in retaining the section 377 IPC in the books of statutes, while conveniently ignoring to mention that the same law commission in a later report namely the 172nd report of the Commission has actually recommended that the rape laws be changed to [a] make it gender neutral; [b] make special provisions for child sexual abuse; and [c] repeal section 377 of the IPC.
In paragraph 32 of the reply the government states: “In fact, the purpose of this section 377 IPC is to provide a healthy environment in the society by criminalizing unnatural sexual activities against the order of nature.” And then goes on to add in Paragraph 33: “If this provision is taken out of the statute book, a public display of such affection would, at the most, attract charges of indecent exposure which carry a lesser jail sentence than the existing imprisonment for life or imprisonment of 10 years and fine. While the Government cannot police morality, in a civil society criminal law has to express and reflect public morality and concerns about harm to the society at large. If this is not observed, whatever little respect of law is left would disappear, as law would have lost its legitimacy”.


Despite its claim that it is not attempting to legislate morality, the governments position supports heteronormativity, by positing displays of public affection of same sex couples would lead to moral decay. Discursively heterosexuality can only be maintained as positive (read:normal) by creating homosexuality as somehow perverse and or deviant. To support its position the government refers to "unnatural" sex acts. The fact that the same statue is used to prosecute pedophilia further encourages the social acceptance of homosexuality as something that should be reviled despite the fact that the two have nothing in common. This essentially marginalizes, and silences a minority of Indian citizens. What we are seeing is truly the tyranny of majority at work.

In the example of Wetka and Melka we can see how patriarchy and homophobia can work together to limit human relations. Their of act of love, was denied because there was concern for two women supporting themselves. From this we can infer a justification of mandatory heterosexuality based in a patriarchal understanding of gender roles. Indian society still sees men as providers, and women as nurtures. Though we are far removed from a hunter gather society, women are still relegated to roles that bare no relevance to the way that modern society functions. This patriarchal understanding not only affects those that identify as lesbians, it further curtails opportunities for women to be self supporting. Without access to the money market economy women become slaves through financial dependency. In fact it was necessary to Wetka and Melka to prove that they could be self sustaining to achieve a small form of approval that should not have been required for their relationship. In this it is clear what is defined as "natural" supports traditional gender roles.

By holding on to its colonial past rather than using traditional understandings of gender, and sexuality as written by the Hindu sage Vatsayana, the Indian government in actuality is governing contrary to its own national history. The kamasutra dedicates an entire chapter to homosexual love acts. The very existence of the Kamasutra challenges the idea of "natural" sex acts, on the continent. It is also worth noting that during the Mughal period, homosexuality was well received in Muslim courts. Normalizing behavior only serves to create a docile populace. The state is creating conformity through ignorance, hate and fear. When societies learn to hate based in ignorance, they are less likely to challenge legislation that seeks to supplant personal agency unless they can recognize an individual link. In this instance by holding on to its colonial past long after India's oppressors have publicly decried such ideals, stops India from reconnecting with a past that does not involve western construction. In its desire to progress on the global stage supplanting false social constructions as normal does not in anyway equate to the progress that it is trying to achieve. Progress cannot be borne on the backs of the stigmatized bodies of women, and or specifically the GLBT community. Obedience to social construction does not allow for fluidity or experimentation. When we stop growing as a people, societies become stagnate and are subject to decay. Equal participation allows for a continual influx of new ideas. Looking backward in this instance may be a key to future progress.
Posted by Renee at Wednesday, May 07, 2008

is there a primer on "colonialism" that i can read. obviously i know what it means as in "early American Colonies", but in the context of racism, where is a good place to learn more?

a good start is the classic "discourse on colonialism" by aime cesaire, who recently died. it breaks it down.

May I humbly suggest Franz Fannon. Specifically I would start with the "Wretched of the Earth". I know that this is very dated but this is where I was first introduced to post colonial studies.

i will start there, with both of those suggestions.

Queer sexualities in India is a tricky and complex topic that I studied recently in my graduate work.

The colonialism being referred to here is British colonialism; Indian post-colonial nationalism has emphasized asserting "authentic Indian values" as a way to establish an identity outside of British colonial influence. Since these nationalists posit queerness as a product of Western society and values, they "other" queerness. What many queer activists try to do is to "recover" the existence of an "authentically Indian" queer identity from classical Indian texts so that queer sexualities can be accepted into post-colonial Indian nationalism.

One problem is that post-colonial Indian nationalism's ardent emphasis on heterosexuality is a result of British colonialism's denigration of Indian men as effeminate, so to try to reassert a positive identity, India emphasizes traditional masculinity.

The problem with this "recovery" is that while queer sex practices existed, queer sexual identities did not. Further, the rhetorical appeal to "precolonial" authenticity operates under the same assumptions as the present nationalism, and is also problematic in light of postcolonial theory. Both perspectives appeal to precolonial nostalgia and fail to recognize the binary construction of national identity.

Clearly, the practices, behaviors, and values embraces by the Indian government is problematic. But it is not as simple as merely addressing sexism, and if we (as westerners) look at their situation through Western eyes we risk laying our framework of "sexual liberation" onto a culture that has a completely different history than ours. Because of this, queer sexuality, visibility, and freedom will be accomplished differently than ours and may also look different than ours.

My point of appealing to a precolonial understanding of sexual identities is precisely because specific identities did not exist. Homosexuality is only problematic when it is compared dependent upon heterosexuality for definition. The current confessional in regards to homosexuality is what helps to create it as a deviant identity rather than having one identity that subsumes all sexualities.

Hello, constantly i used to check website posts here
in the early hours in the dawn, because i love to learn more and more.

Nice post. I learn something new and challenging on sites I stumbleupon everyday.
It's always exciting to read articles from other authors and use a little something from other sites.

Feel free to surf to my homepage ... Adfoc.Us

Feel free to surf to my webpage; incentria

I have read a few excellent stuff here. Definitely value bookmarking for
revisiting. I surprise how so much attempt you put to make
such a excellent informative website.

Feel free to surf to my web site; miscrits Sunfall

F*ckin' remarkable things here. I am very satisfied to look your post. Thank you a lot and i'm taking a look forward to touch you.
Will you kindly drop me a e-mail?

Hi there Dear, are you truly visiting this website regularly,
if so then you will without doubt take pleasant experience.

Great web site. Plenty of helpful info here. I am sending
it to a few buddies ans additionally sharing in delicious.
And naturally, thanks for your effort!

Feel free to surf to my site: hacks for miscrits and cheats