Jesse Jackson, Hunger and The IMF 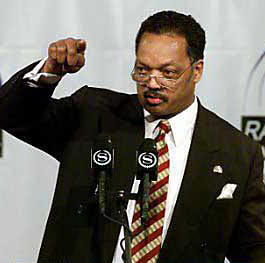 Jesse Jackson met with U.S. ambassador, Janet Sanderson; Haitian President Rene Préval; parliamentarians; and leaders of the aid groups in Haiti at the end of April to discuss the food shortage. According to a press release from PUSH, Jackson’s organization, “Before the delegation left Port-au-Prince, they began discussing ways to provide children with school supplies in the fall and to convince Congress and the Bush administration to facilitate food relief.”

Haitians have been surviving by eating mud fried with butter and salt, while in the West people complain about limits on rice purchases as Sams Club. Even the poorest among western inhabitants, are not as poor as the citizens of Haiti. We readily throw food away, and for some what we consider garbage, would be thought of as richness.

Haitians are struggling to repay an odious date incurred by the Duvalier's. Over half of the $6 million a month Haiti pays to the World Bank and International Monetary Fund (IMF)—scheduled to increase soon to $8 million a month—pays for the Duvaliers’ loans. According to Workers World, "Since 1980 when the loans started to flow, its per-capita Gross Domestic Product (GDP) has shrunk by nearly 40 percent. Haiti became the poorest country in the Americas, and one of the hungriest countries in the world. Over half of all Haitians struggle to survive on $1 a day or less, 70 percent make less than $2 a day, and few poor people live past the age of 55."

"The main reason why Haiti can’t feed itself is that the World Bank and the IMF insisted as a condition for the loans they granted Haiti that it open its markets to the rice, corn and beans that U.S. agribusiness gets substantial subsidies to produce. These cheap imports drove local producers from the markets, which meant Haiti was at the mercy of the world market."

Western politicians have sold the world on the notion of a level playing field. This has never been possible, as the rules of trade inherently favor western capitalist nations. It is also important to note that the so-called third world countries can never achieve the gains of the west, as western hegemony was predicated on colonies. Third world nations have no people to colonize. How can trade be considered fair, and or equal when the basis of it, is one country exploiting another. By using economic power western nations have re-colonized third world nations. Consider that while the west routinely subsidizes agribusiness, third world nations are banned from doing so due to loan agreements signed with the IMF and World Bank. This causes many countries to import food that it should be growing.

The current food crises is man created. Food rots in Hatti's markets because people cannot afford to pay for it. The currency has been so devalued as to be worthless. In the meantime we sup happily without realizing the degree to which western economic privilege causes starvation to the bulk of the worlds people. Money, a social construction stands between people and healthy nutritious life sustaining food. Parents openly weep at the distended stomachs of their children. Where is the justice or equality in this situation?

I sometimes wonder if it is easier to bear the images of the starving, because the people by enlarged are darker skinned. Historically the brown and black peoples of this world have been disregarded, while whites have lived in privilege and in some cases overwhelming opulence. In fact the relations of trade are structured such that peoples of the Third World can be considered modern day slave workers, for what is a wage of a dollar a day but slave wages?

The common refrain heard in the west is take care of "our own" first. Who exactly make up "our own" kind? We know it is not blacks, and certainly not natives...perhaps "our kind" refers to whites. This kind of thinking is used to justify creating so-called third world bodies as "other". Western nations spew the rhetoric of multiculturalism while the darker skinned inhabitants live in poverty. Is it shocking that those that live outside the borders of luxury who are bodies of color are dehumanized and devalued?
Posted by Renee at Saturday, May 10, 2008

How can we as westerners help the Hatians?

I would gladly give up a meal per day if it would help people get food in Haiti. I know that's not going to help them, though.

Do the powers that be in the World Bank really think that what they are doing is okay? That it's right for them to demand payment from people who cannot even eat? Wouldn't it be a better solution to allow them to defer those loans until they are in a position to pay them without killing themselves in the process?

Why can these institutions not see that keeping such people in abject poverty is not economically progressive--that all financial powers are better off in the long run if the people indebted to them are given better quality of life so that they may perhaps get loans in the future for improving their infrastructure once they are in a position to do that?

If I have a credit card, and the company bankrupts me with interest rates, they don't fare any better for that--but if I have the ability to create a better life for myself, then my credit needs may increase, which is a plus for the credit card company. Rather than ruin me for one existing debt, it's better to have a financially stable me around in the future to, say, use my credit card for a cruise or something.