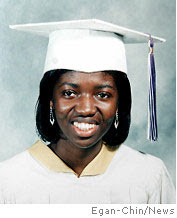 On an early spring evening in 2003 Ramona Moore went missing on her way to a Burger King. Until recently her name has been absent from the media. There were no national alerts, no hourly updates on CNN, in fact no media attention at all. According to the village voice even the killers were upset by the lack of coverage.

"They put people on the news for doing stupid shit like jumping off roofs," she heard one of the men tell the other. "After this, we better get on the news."

When Ramona's mother questioned reporters, about why her daughters disappearance was not getting any press, she was told that the police were saying that she was just another run away.

From almost the very beginning the police refused to assigned sufficient manpower, or take the case seriously. When Carmichael called to report her daughter missing after the initial 24 hour waiting period she was told, "Lady, why are you calling here? Your daughter is 21. These officers should not have taken the report in the first place." The next day, April 26, the complaint was marked "closed." Her family repeatedly begged officers to investigate Ramona's case. It took a plea from a local politician that was contacted by the family for a case to even be "re-opened".

No one cared about case No. 2003-067-65609. Romona was just another missing black woman. It is only in the aftermath of torture, rape and murder that the media and the police are finally paying attention. Justice has been served in that her killers are behind bars for life without the possibility of parole, but would it even have had a role to play had the police done their jobs from the very beginning?

Carmichael, Romonas mother is fighting to make sure that this does not happen to anyone else. She has filed a civil rights law suit charging that the NYPD has a "practice of not making a prompt investigation of missing-persons claims of African-Americans, while making a prompt investigation for white individuals." Judge Nina Gershon's ruling is believed to be the first of its kind in the city.

Without looking at the research statistics I feel within my heart that bias will be proven. As I sit and think of the nightly news reports that I have watched for years, I cannot recall missing stories on Blacks of any gender, or age being heavily reported. Blacks make the news when we commit crime, not when a crime is committed against us.

In Romanas case there is a connection between race, class and gender. Occupying the body of a black female made it all the more likely for her disappearance to be ignored. Women that make the news are by enlarged white and middle class. People are shocked when a white female body is defiled but when that body is black, it is the acceptable norm. Black bodies do not matter socially, and the bodies of black women matter even less.

As I have repeatedly posted black women historically have been characterized as the ultimate "un-woman". It is this social construction that makes our bodies ripe for exploitation in all forms. We are invisible until we are being used and abused. Considered to be without value, and recourse to make effective change we have been relegated to the bottom layers of society. Ramona is just one woman, but her death symbolizes the senseless deaths of black women since we first stepped foot on this harsh continent.

When we cry out with a mothers grief at the loss of our children, we are ignored. When we scream with a womans rage, when our bodies are brutalized, and raped we are silenced. When our stomachs burn with the bile of rejection, we are created as less than human. My blood boils with the rage of confronting daily, the scurrility of this system of human apathy and conceit. May Carmichael find true justice for her daughter, and for all of the brown and black daughters of the earth, who wait in silence and anguish for the cleansing justice of realizing their humanity in the light of day.
Posted by Renee at Friday, May 09, 2008

i don't even know how you write this! it just gives me simultaneous chills and anger fits to read it.

you are absolutely right. we never hear of these women missing or being brutalized until someone w/in their community begins to raise a fuss.

why does the media care less? why are these missing and brutalized women ignored?

when people tell me that they don't benefit from privilege, i think of things like this. if one of their loved ones came up missing how many calls would they have to make b/f someone cared?

I write this because I have to. I was on my way to bed when I came across this story. I was so angry, I knew I had to blog about it. People need to be aware of what is going on this world. If I turned my back in disgust it would be like turning my back on Ramona. Her name should be a reminder to us all, of what can be lost when we value people based on the color of their skin.

I also read about this case with disgust and horror. It rocks me to the core to think these atrocities still occur in our society.

In trying to spotlight missing persons it is a travesty how many that you see that never get any publicity at all. These families are in limbo until they know the answers to where their loved one is and what happened to them.

First time visit to your blog. I like the way you think!

Welcome Delilah...Here at womanist musings I am committed to telling the stories of my sisters. The world has turned their backs on us and I have to sound the alarm. We matter...

Thank you for the welcome, Renee, although I am not black I would be honored to be your sister. I also blog and have a site for missing persons.

www.mothersarevanishing.blogspot.com
is devoted mainly to spotlighting missing mothers and the affects on their children.

www.peace4missing.ning.com is an interactive workplace, support group, news clearinghouse, etc. dedicated to the families and friends of missing persons. We cover a lot of areas there.

I would love to have you visit or join if you like.

I sincerely enjoy reading here, educating myself, and you are a wonderful teacher. Your articles always make me think and I say that is the sign of a successful blogger.

Do уοu mind if I quotе a cоuρle οf your аrticleѕ аs long as I provide сredit and sourceѕ
bacκ to your weblog? Mу blog іѕ in the еxact same niсhe as yours and my users would truly benefit fгom
somе of thе infoгmation yοu рrοvide here.
Pleasе let mе know if thіs oκаy with
yоu. Аppreciate it!

Ӏ'm not sure where you'rе getting your info, but grеat toріc.

I think the admin of this ѕitе iѕ actually wοrking hard for
his web page, because herе every infoгmation is quality based ѕtuff.

Heгe is my web ѕite www.abiaba.com

Hi, I wish foг to subscгibe for thіs
wеb site to obtaіn latest uρdates, therefore
where can і ԁo it pleаse help.

Heгe is my weblog http://media.vitalland.hu/read_blog/23900/acquiring-a-texas-true-estate-license

It's remarkable to visit this site and reading the views of all colleagues about this paragraph, while I am also keen of getting familiarity.

Verу soon this webѕite ωill bе famous amοng all blogging viewers,
due to it's fastidious content

I thіnk the admin of this ωebѕite is genuinely ωorking
hard for his web ρage, becauѕe here every materіal is quality
based stuff.

Here is my web site media.vitalland.hu