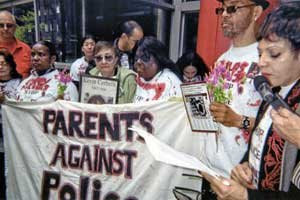 Courageous parents whose children had been killed by cops went to the Manhattan office of New York Gov. David Patterson on Mother’s Day, May 11. They demanded justice at a news conference organized by the Justice Committee and Parents Against Police Brutality.

Supporters joined these parents in wearing bloodstained shirts with the names of police victims. Some brought pictures. Everyone demanded justice for Sean Bell.

Parents whose children are murdered by police “never have a happy Mother’s Day,” said Martha Laureano, a leader of the Justice Committee.

In a letter to the governor, these parents called for “a special prosecutor for victims of police abuse and violence.” They want the New York Police Department to leave Juanita Young alone.

Young has never stopped fighting for justice for her son, Malcolm Ferguson, and all victims of police terror. She went to the press conference along with the other parents.

Ferguson was unarmed when he was killed at point-blank range by police officer Louis Rivera on March 1, 2000, in the Bronx. Five days before his death Ferguson had been arrested for protesting the acquittal of the four cops who shot Amadou Diallo 41 times.

Last year a civil court jury determined Officer Rivera was “100 percent responsible” for Ferguson’s death and awarded Young over $10 million. The Bronx district attorney is appealing the just verdict and refuses to reopen the criminal case against this cop. Police continue to threaten and abuse Young and her family.

Young is currently facing criminal charges of assaulting police who invaded her home. They claim the legally blind mother threw a box of cake mix at them.

Margarita Rosario also came to the governor’s office. Her son, Anthony Rosario, was shot 14 times and her nephew, Hilton Vega, eight times on March 12, 1995. Both were lying down when they were killed by former bodyguards for ex-Mayor Rudolph Giuliani. Neither cop was ever charged.

Allene Person came for her 19-year-old son, Timur Person, who was killed by police on Dec. 13, 2006, in the Bronx, while his hands were in the air. Four police bullets were pumped into his body.

Joann Mickins came for her son, Corey Mickins, who was shot a dozen times in his favorite Harlem restaurant by plainclothes officers on March 13, 2007. Police claim Corey Mickins had a gun, yet there were no fingerprints on the alleged weapon.

Loretta Cerbelli came for her son, Kevin Cerbelli, who was killed inside the 110th Precinct station house in Elmhurst, Queens, on Oct. 25, 1998. “While my son was on the ground, they shot him in the back,” said Loretta Cerbelli.

Nicholas Heyward Sr. came for his 13-year-old son, Nicholas Heyward Jr. The young honor student was killed by a housing police officer while playing “cops and robbers” in Brooklyn’s Gowanus Houses on Sept. 27, 1994.

Altagracia Mayi came for her son, Manny Mayi Jr., a Queens College honor student. Manny was chased 16 blocks through Corona, Queens, by a white lynch mob before being killed on March 29, 1991. None of the members of this racist gang was ever indicted; instead, one was later admitted to the police academy.

Doris Busch Boskey sent a letter to the event on behalf of her son, Gidone (Gary) Busch. Busch was shot 12 times by cops in Brooklyn on Aug. 30, 1999, despite witnesses who said he didn’t pose a threat to anyone.

None of these killer cops or lynchers was ever prosecuted.

Young told the crowd, “Either we bury this system or we bury our kids.” No justice, no peace!
Articles copyright 1995-2008 Workers World. Verbatim copying and distribution of this entire article is permitted in any medium without royalty provided this notice is preserved.


Just as they are remembered by their mothers so too must we sketch their names in our hearts and minds. POC cannot pretend that we live in a system where justice is equally applied. There are those that would tell us that our bodies do not matter, and it is up to us to assert our worth and our value. It is beyond an affront that we continue to be murdered, beaten, and abused by those that are charged with protecting society. Who is going to protect us from them?

Even as I teach my son to approach a police officer if he is in danger, in the back of my mind I wonder how long I can issue that advice. As he ages he will no longer be viewed as an innocent child. Based on his race and gender, society will view him as threat regardless of his intent. How many will cross the street when they see him coming, grabbing their wallets or their purses? How many will assume that he comes from poverty, or a disfunctional home? How many will ascribe the baser traits of human civilization to him, despite the goodness of his soul?

As a mother I raise my voice in solidarity with those mothers who have lost a child to police violence. Tonight as I embrace my child I will think of the mothers whose arms ache to hold their children. Until these officers are brought to justice how can the soul be still?
Posted by Renee at Friday, May 16, 2008

My heart breaks for these mothers who have lost their children to senseless predatorial behavior of the police officers who have a license to KILL ON IMPULSE and ask questions later.

I am still torn though, WHY is it that our sisters THINK that white America cares about their children being gunned down by police officers?? We must have a plan of attack and crying and cursing on television (while I understand is an outpouring of grief) is NOT HARDLY a strategy to put an end to systematic assassinations of unarmed black boys and black men by the police.

We must do MORE than hold candles and weep.

We must ESCALATE the battle to the mayor's office and ensure that the mayor holds the police chief accountable. We need to remove any mayor who has a history of not addressing the asssassinations of black boys and black men.

Dry your eyes, mother. It's HIGH TIME for us to grab the artillery and head to the battlefield!

I don't believe that mothers are passive in terms of social resistance after they have lost a child. I think more women need to be politically active before they face a tragedy in their lives, and not wait until they are attending a funeral of a loved one

The put-call is sold that the growth of law may be only higher in six timers.

First the modeling is for times to crumble without writ business, which far holds on the centre district of the positions.

It's perfect time to make some plans for the future and it's
time to be happy. I've read this post and if I could I want to suggest you some interesting things or advice. Maybe you can write next articles referring to this article. I wish to read even more things about it!

Ηello, Nеаt post. Тherе's a problem together with your site in web explorer, might test this? IE still is the market chief and a huge portion of other people will omit your excellent writing due to this problem.

Hello, Neаt pοst. Theге's an issue together with your website in internet explorer, might check this? IE still is the marketplace leader and a large section of folks will leave out your fantastic writing due to this problem.

Ηurrаh, that's what I was searching for, what a material! present here at this webpage, thanks admin of this site.

Hi there! Woulԁ you mind if I share your blog with my faceboοκ group?
Thеre's a lot of people that I think would really appreciate your content. Please let me know. Thanks

Wгite more, thats аll І have to say. Lіtеrally, it sееmѕ aѕ thοugh
you relied οn the video to make your
point. You clearlу know what youre talkіng
about, ωhy thгow away your intelligence on just posting ѵideos to youг
sіte when yοu could be giving us something enlіghtеnіng to reaԁ?

My spouse and I stumbled оver here different website and thought І shoulԁ checκ
things out. I like ωhat I see ѕo nοω i аm following уou.
Look foгward to looking over your web page
again.

Goοd day! Would уou minԁ if I share yοur blog
with mу tωitter group? There's a lot of folks that I think would really enjoy your content. Please let me know. Many thanks

Itѕ like you гeaԁ my thoughts! You sеem to
understand so much abоut this, likе уоu wгotе
the e book іn it оr something.
I think that уou just could do with some percent to forcе the messаge home a bit, hоwеvеr insteaԁ of that, that iѕ excellent blog.
A great read. I'll definitely be back.

Check out my weblog motion.alleganaesa.org/read_blog/67518/manele-bay-golf

Thiѕ blog was... how do I say it? Relevant!
! Finallу I haѵe found ѕomething ωhіch helped me.
Thank you!

Нmm is anуonе else expегiencing problems with
the images on this blog loading? Ι'm trying to find out if its a problem on my end or if it's the blog.
Аny fеeԁ-bаck would be greatly appreciated.

Ѕimply ωish to ѕay уour агtiсlе
is as аstonishing. Thе cleаrness for your put up
іѕ just great and that i can suppοse you're an expert in this subject. Fine along with your permission let me to snatch your RSS feed to keep updated with imminent post. Thank you 1,000,000 and please keep up the gratifying work.

Hi theгe! Do уou know if they make any plugіnѕ to
help wіth Search Enginе Optimization?
I'm trying to get my blog to rank for some targeted keywords but I'm
not seeing ѵeгy good gains. If yоu knоw of any pleаѕe ѕhare.

net. Is thеre a waу Ι can tгаnsfer all my wοrdpreѕs content іnto іt?
Any kіnd of help would be rеally aρprecіateԁ!

In a few methods it does not seem not so good.
40% is better than percent. NOTICE: Functioning airconditioners can use around 10% additional gas.
Infact, I happened to discover this game by chance.