Oprah Is A Whore, Barack And Wright Are Homosexuals ? 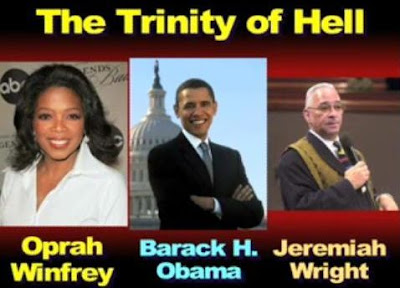 Courtesy of Black News, Your Views, comes a video that must be seen to be believed. A Reverend from Harlem, James David Manning has named Oprah Winfrey, Barack Obama, and Jeremiah Wright the Trinity of Hell and has questioned their sexuality. He calls Barack a pimp and Oprah a whore. This is beyond pandering to the lowest common denominator.

He accuses Oprah of specifically betraying white women by supporting Barack. It seems he credits white women with Winfreys success, and posits that her refusal to support Clinton is tantamount to biting the hand that feeds you. He goes on to encourage white women to boycott not only the Oprah show, but all related Oprah products.

Black women apparently should not be entitled to decide for ourselves who we choose to support. We must constantly look over our shoulder to make sure not to upset the status quo. Should we dare to think that autonomy applies to us, men like James Manning are waiting in the wings to remind us of our place in society. Free thinking women are whores. We are less than. How dare we refuse to submit. How dare we decide to use our brains.

You would think that, that would be enough ignorance and hatred for one man for one day, but oh no... He goes on to attack Barack. He repeatedly references his middle name thus preying upon the the islomphobia that is so dominant in the US today. The fact that Barack is not a Muslim, or a terrorist is seemingly irrelevant, what is important is the suggestion that he may be. He is guilty of collaboration based on a name he did not choose.

Ok, I thought he has to be done now, but oh no... Barack is not only a "terrorist", but a pimp. Manning then goes on to denigrate both Barack and Reverand Wright by calling them homosexuals. I wish to make clear that labeling someone a homosexual should not be considered an insult, but in the homophobic world in which we live it is pandering to those that hate based on ignorance, and fear.

I don't know what God Manning is speaking to, but I am quite sure that She/He (God) does not want someone speaking hatred in her/his name. You bring shame upon yourself sir. You represent all that is wrong with our society. Hatred, fear and intolerance breed contempt. You claim to be warning others of the potential harm that Winfrey, Obama and Wright are intent on wreaking upon society, however may I humbly submit that it is you and others of your ilk that are the true apocalypse. Judge not lest ye be judged.

i have to wonder why the hell it is that someone can not support one candidate w/o betraying their race/sex/religion or whathaveyou. it makes no sense to me that we can't all have our own opinions. our various identities obviously decide whom we can or can not support, not our brains and principles.