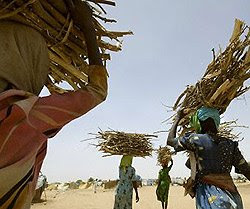 In support of Amnesty International and the women of Darfur, I am posting an article from their website posted last February. War is not only played out on land it is reified by womens bodies. Historically, men have raped women to assert their dominance over other males. This can only be rationalized by viewing women as property. Despite the fact that this has occurred for as long as there have been wars, rape has only recently been declared a war crime. This is not an issue that is isolated to Darfur, rather it represents the most recent reincarnation of the male ability to wage war using womens bodies.

As I sit in the safety of my living room in Canada, I cannot conceive of what life is like for these women. My children are well fed, being educated and we feel no fear. Like many we go about our ordinary lives with a sense of entitlement. As westerners we look at these events through an affected lens, rather than an example of womens oppression. But for an accident of birth that could be me, it could be anyone. Suddenly the minutia of my daily rituals seems rather pathetic in light of the real pain and suffering others.

How exactly does one live a life in the shadow of daily fear? This is something that cannot be theorized, or problematized, to use common feminist catch phrases. We cannot from the safety of our homes, jobs, universities speak about others in abstract terms. These are real women confronted with real problems. This is a cause that demands action and not theory. It demands a feminism with the heart of a lioness. It is time we women went to war. Our war will be productive rather than destructive. It will not be limited to the creation of safe places, rather it should construct a safe world. We cannot abdicate our duty due to a sense of apathy based in distance, or cultural, or racial difference. We must rise like the phoenix from the ashes of the desert and declare war on rape, and mans ability to subjugate and terrorize women. Today as a women, we should declare, we are not your eternal "other" and we will be the subject and not the object of our lives journey!

"All around the camps there is not enough wood. But the Arab Jammala dominate the area and we daren’t go far out. If you are a man you will be beaten, if you are a woman you will be raped." – Internally displaced man living in a camp, 2007.

At least 2.3 million people have been displaced by the conflict in Darfur. Most of those driven from their homes and communities are now living in more than 65 camps dotted around Darfur.

Hundreds of thousands of people were driven from their home in 2003-4 in attacks that were accompanied not only by killing, but also by rape of women on an unprecedented scale.

Janjawid militias used rape as a weapon to humiliate and punish the communities they attacked. They often carried out assaults in public and abducting some women, taking them to militia camps to live for months in sexual slavery.

There are more women living in camps than men and the threat of rape remains rife for those who venture outside the camps. Many of the camps are surrounded by belts of deserted land with hardly a tree standing. Rapes are carried out on women who leave the camps to go to market or collect firewood. They are carried out by Janjawid militia, government soldiers, armed opposition groups and even by other displaced people.

One girl displaced during the conflict told of being raped by a group of men from the Sudanese army while collecting fire wood. When her brother took her to report this to the local police, the policeman refused to report the case and detained her brother when he questioned the procedure.

"The images of that day occupied my mind. I can’t say I have completely recovered. The shock is still terrible. I don’t trust the police and I never will trust them," said the girl to Amnesty International.

Most women raped in Darfur never report what has happened because it’s so unlikely that the perpetrator will be brought to justice that there’s little point in a woman harming her reputation and prospects of marriage.

Police rarely investigate cases of rape reported to them, while if the alleged rapists are members of the Sudanese Armed Forces, justice appears to be impossible. In some instances, it is the person who makes the complaint who is detained.


AMNESTY INTERNATIONAL
Posted by Renee at Thursday, May 15, 2008