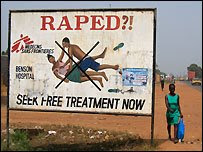 According to Amnesty International,"Thousands of women and girls have suffered rape and other forms of sexual violence, yet, more than a year on from the signing of a peace agreement, no one has been prosecuted and it remains unclear if, how and when those responsible will ever face justice."

Even infants are not immune from sexual assault. Some believe that raping a child will bring them good luck, others simply assume it is the natural right of men. With a low rate of conviction rape continues to occur daily despite education campaigns led by the government. According to UNIML Press, UN Envoy, Ms. Ellen Margrethe Løj, Special Representative of the Secretary-General (SRSG),"commended the leadership being shown by government and county officials in confronting the serious problem of rape, which is currently the single most frequently committed serious crime in Liberia."

"Ms. Løj urged all Liberians not to keep quiet about rape but to ensure that rapists are brought to justice. She called on victims of rape and their families not to accept settlements or compromises with the rapists, because this could be a betrayal of the victim and lead to other girls and women being raped."

While I would agree that encouraging a culture of silence regarding violence against women is inherently destructive, accusing rape victims of betraying other women by trying to find their own form of closure is wrong. It is a form of victim blaming. Clearly rape is occurring at an extremely high rate, due to a history of male privilege, lack of prosecution, and a war. It is a well documented historical fact globally, that women are often viewed as the spoils of war. Regardless of the acts of any one individual, until the issues that lead to rape are dealt with, whether or not a woman chooses to negotiate with her rapist after the fact is irrelevant.

Men need to make a connection between their privilege and the damage that is caused by rape. Until society is educated and the rights of women validated this will continue to be a daily occurrence. When a child can be raped by a 65 year old pastor who claimed to be influenced by the devil, it speaks of a callous disregard for females. Rape is a crime against humanity and should be treated as such. This should include the prosecution of ALL acts of rape. No circumstances should be allowed to mitigate the seriousness of the crime, whether it is the devil, superstition or ignorance, women should not be laid waste to empower men. Amnesty International has demanded that "the protection of the rights of women and girls must be at the centre of all efforts to rebuild Liberia." What is unity, and peace without sanctifying the value of women?
Posted by Renee at Monday, May 12, 2008

This post makes me wonder about a few things. First, why do you think superstitions like that it's good luck to rape an infant come about? I've heard of other such superstitions, though not specifically in Liberia, and while I think it's normal for people to come up with superstitions, I don't think these are the normal type, like they came about just by chance. There must be something going on, like maybe a way to excuse powerful people rather than confronting them?

Also, what do you think should be the consequences for rape like this, especially during war? I've thought a little on my blog about the injustice and inefficiency of prison and alternative ways to deal with rapists, but mostly from an American perspective. It seems like the dynamics of rape as a weapon of war are different, so I wonder how such rapists should be handled in order to actually make progress. Of course, that depends on prosecuting them in the first place.

First we cannot divide things into normal and not normal, as what is deemed unacceptable by some cultures is perfectly fine in others. The notion of universal ideas is always problematic.
I am firm believer in harsh sentencing for rape. Throughout imprisonment I believe there should be an attempt to rehabilitate. While I am not convinced that a program will ever cause someone to acknowledge their privilege without a true desire on their part, an attempt must be made.
Rape as a weapon of war is no different than rape in any other setting. Rape is a crime of power. In a time of war when a man rapes a woman he is staking a claim against another man using a womans body. That is simply another expression of power.