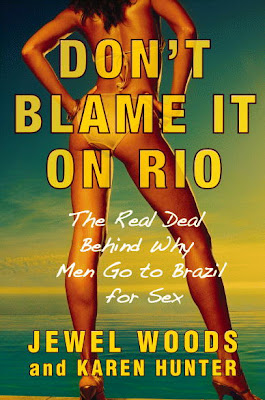 Jewel Woods and Karen Hunter are the authors of Don't Blame It On Rio. I recently came across an interview that they did at, BlackVoices. To say that I am upset is an understatement. I must state that my judgment is based solely on reviewing the interview posted there, as well as reading an excerpt from the book.

From the Preface of Don't Blame it on Rio:
At a minimum, black men make trips overseas for physical reasons that include sex. However, many have experienced a level of physical and sexual intimacy, a sort of sexual healing, that they see as lacking in many of their current relationships with black women. They also make these trips for cultural reasons. They describe a deep embrace and recognition to a people, a time and a land that they do not get here in the United States and do not see in black women. Most importantly, these men increasingly travel overseas because of a profound sense of identity that they find and create on these trips. So what they ultimately end up paying for is access to an elite male experience, and intercourse with a set of beliefs and ideas about black manhood that they think are denied to them by black women in America. The problem is that during these journeys, sometimes consciously but also unconsciously, black men are led further away from black women--not just physically, but also emotionally, psychologically, and spiritually.

What we are talking about her is the denigration of Black women for the services received from sex trade workers. Black men want to be recognized, treated as men, and valued, well I tell you what, you first. Exploiting women for the purposes of self elevation is disgusting and predatory. These women don't respect you fool, they need MONEY. If she tells you how handsome, strong, and sexy you are it is because you have become necessary to her subsistence. The economy of Brazil and indeed the capitalist mode of exchange to which we are all subject to impoverishes women. The feminization of poverty is a global phenomenon.

MTW: What do black men feel like they're not getting from black women at home?

JW: The dilemma is that part of what men feel like they are not getting from black women is also connected with what they feel like they are not getting from America as well...
Men also seem to feel like they are not getting the type of physical and emotional care that they think they need and deserve. For a class of black men that work at some of the highest levels of America there is a feeling that they want peace in their household. I point out in the chapter "She Acts Like A Man" that men may confuse peace with submission, but there is a sense that black men want their homes to be different than their work environment. In other areas, black men seem to want black women to be physically smaller, they want black women to be more exploratory in their sexuality and a host of other things.

Where to begin with this one... No matter what issues black men face in the outside world due to racism, classism, etc he is still able to exercise patriarchal privilege within the household, despite claims to the contrary. How much more must women submit to patriarchy for men to feel valued? Imagine that they are suffering from a lack of physical and emotional care while their terrible, evil, wives are busy doing the majority of the housework, childcare, and elder care. I know the solution...black women should just give up sleep altogether, and then of black men would be satisfied. If acting like a man means I refuse to be worked until I look older than you, then too damn bad. Black women have historically been treated like beasts of burden, and if refusing to wear the yolk of oppression, smiling broadly breasts out means identifying as a male, I say its about time black women were given our due.
Final thought on this one, the whole acting like a male thing is tired. Since black women first stepped foot on this continent we have been ascribed the ultimate "un-woman" category. Yes, we are woman enough when you want us on our backs, but when it comes to work, we better grow some balls and get in there with the big boys. Enough of the gender binaries. Taunts aside no one decides our gender or how we choose to negotiate it but us. Grow a vagina, it might make you a kinder person.

This is perhaps the biggest one. On these trips, men don’t just have sex; they also live out their sexual fantasies. As one man said matter-of-factly, “Everything you’ve seen on a video, I have done!”

What typically happens at first is that men just have rampant sex. However, on their subsequent trips they usually have made plans to do all the different things that they have only dreamed about or seen on videos. I talked with one man who was going for his second time, and I asked him what some of his expectations were for his upcoming trip.

Invariably, this type of sexual adventurism leads them to have more varied sexual appetites and interests. A number of men come back from these trips going on about how sexually free Brazilian women are compared to their current or past partners.

Once again it is all about the men and no reflection on how their behavior is effecting Brazilian women. To them these are just bodies to be purchased, used and discarded like yesterdays news. But it is a healthy experience right?

Much of this whole phenomenon is founded on the belief and idea that Brazilian women are the most beautiful women in the world. Invariably, professional black men come back with problems with the way black women look. But it’s deeper than the physical looks, although that’s the driving force. The way Brazilian women look and care for themselves make black men see other things in black women that they feel are lacking. The comparison becomes very strong. And the mind-set is, why sift through the large number of black women to find one who works out and looks good and isn’t overbearing, when you can have a sea of “perfect” women in Brazil?

If you were going to sell your car, wouldn't you take it through a car wash first? Of course these women are beautiful and well kept, their bodies are their main commodity. To not invest in them would be bad business sense. To compare that to a professional black women who is working a double day is not only unfair, it smacks of a divide and conquer.

In my heart I do not have any animosity towards the sex trade workers. I know that they are doing the best that they can within a system that is predicated on exploitation. Most sex trade workers have a history of sexual abuse. The work that they do is inherently degrading and damaging to the soul. My anger is directed at the black johns who seek to assert their patriarchal privilege by exploiting these vulnerable women, and then in turn demonizing black women. It seems to me that the only way these men can realize themselves as individuals is by constructing a reflective other to demean and otherwise harm. Though they may profess to idolize Brazilian women their predatory behavior says otherwise. We do not reduce to a commodity that which we respect and or love.

If it is about reclaiming manhood why is there a fixation on sexual acts? This can only be understood as affirming masculinity, if the masculine is understood as mendacious lechery, and the feminine as submissive, reducible body parts. Rather than engendering sympathy, what this book does is enrage my sensibilities. As a WOC I am tired of being denigrated for the benefit of others. Nothing has changed since we were sold naked on the slave blocks. Our bodies are considered to be always ready for consumption, or thought of as cheap and efficient labor. Enough, go sell your sad story to someone that gives a damn. Today I am a little short on empathy.
Posted by Renee at Friday, May 16, 2008

This is my first visit to your blog.

It's great that you are writing on this issue!

Some times, some black men do not realize that they are seeking an "external" diversion from the brokenness that they have not addressed inside.

A week or so ago, I lead a discussion at my blog about, "BLACK MASCULINITY AND ITS IMPACT ON BLACK WOMEN" and "BLACK WOMEN SPEAK ABOUT SEXUAL ETHICS.

So much of what you are saying in your post was expressed by the discussion participants.

So happy you wrote about this issue.

"These women don't respect you fool, they need MONEY."

If only black men would read this sentence until they understand it!!!!!

"Exploiting women for the purposes of self elevation is disgusting and predatory."

I've been saying this for years and no one ever seems to agree with me because i'm always told "its love" BULLSH%T... Wake up !!

"No matter what issues black men face in the outside world due to racism, classism, etc he is still able to exercise patriarchal privilege within the household, despite claims to the contrary. How much more must women submit to patriarchy for men to feel valued?"


"My anger is directed at the black johns who seek to assert their patriarchal privilege by exploiting these vulnerable women, and then in turn demonizing black women."

I feel the same anger all the time

When I read this interview something in me just snapped. From every single angle I looked at this, these men were predators. If black men want solidarity from black women they need to own the ways in which they wrong us.