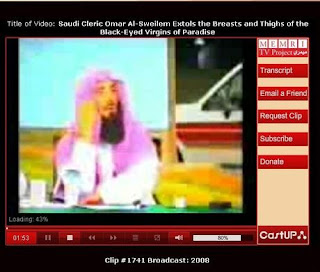 Saudi cleric Omar Al-Sweilem recently decided to remind the faithful of the true rewards of paradise. Thats right, for a life of submission you will be rewarded with virgins. Pay special attention because you are not going to get your everyday run of the mill virgins, oh no, that would never do. Your reward will be white virgins.

The following appeared in a MEMRI Transcript:

The full video can be seen HERE.

It is clear that not only is Omar Al-Sweilem a raving misogynist but a racist as well. Two for the price of one. Isn't it wonderful how it is acceptable under the mantra of religion? In a shining example of bodies that matter, the cleric makes it clear that certain women should be reducible to body parts, and that dark women are not even worth exploiting. Not that I am complaining, as serving men has never been an aspiration of mine.

He does not care for the millions of black or dark skinned Muslim women that would find his commentary insulting and degrading. All that matters is the quest for pure white flesh. Once again white womanhood is presented as desirable, and pure while black or dark skinned women are disregarded and ignored. Those that internalize a message like this will see a division where non exists. Whether through invisibility, or a division into desirable body parts, this is a verbal assault on all women.

To reaffirm the inclusivity of this message, let us look at the sexual aspect of this. Women are reduced to body parts, so that they can serve the sexual desires of man. This happens throughout the world and is not specific to countries and or regions that practice Islam. He says, "Lucky is the one who gets to put her thumb in your hand". Thus women should feel honored to be able to be exploited. Can we say sexist male privilege. Come on say it with me.. sexist male privilege. Omar is using womens bodies to "sell" heaven. Be obedient and you shall reap the rewards.

I am not picking on Omar. I am well aware that patriarchy routinely uses womens bodies to "sell" ideas and commodities. Women can be found in western advertisements splayed across cars, or pitching BBQ sauce with their breasts hanging out. This is no different than Omars little Koranic sell job. He like everyone in the west is aware that sex sells. The bottom line is, whether black, brown, or white, womens bodies only matter to the extent by which they can be exploited. Perhaps if Omars sales pitch is successful in Saudi Arabia the Christian Right will find a way to use it in a western context. Coming to a church near you....
Posted by Renee at Saturday, May 10, 2008

This is really sickening..