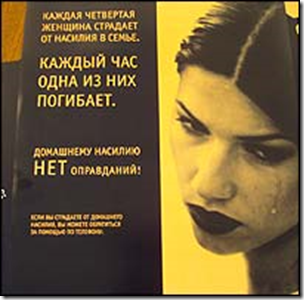 The following is a cross post from Jezebel. So far, our coverage of Russian women on this site has been limited to the fuchsia excesses of teen billionairess and burgeoning fashionista Kira Plastinina. Well, an NPR report that aired this morning shows a sobering reality of Russian womanhood that's so far from Plastinina and her rancid materialism as to be rendered absurd. Gregory Feifer reports from Moscow that 14,000 women die each year in Russia at the hands of their male partners. What's more: wife beating is not considered a crime, and 50% of women in a recent survey say they have been physically abused by their spouses. "The real number of victims is impossible to count as [domestic violence] is seen as a private matter, not to be aired in public," Feifer said. In fact, Feifer notes that there is an old proverb that many Russian women seem to have internalized: "If he beats you, he loves you."

See Jezebel for the rest of this story.

A Russian woman dies every hour they
say, and here it's four a day. The problem is it is not treated as as human rights issue.

While I may have known it was a problem here, I was oblivious that it happens in Russia as well. You just don't hear a lot about that country. Or the average American doesn't.

It's a terribly sad situation. :/

Unfortunately there isn't a single country were women are not slaughtered just because they are women.