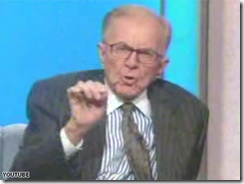 Referencing Jackson's comments, McLaughlin said Obama "fits the stereotype blacks once labelled as an Oreo — a black on the outside, a white on the inside."

"Does it frost Jackson, Jesse Jackson, that…an Oreo should be the beneficiary of the long civil rights struggle which Jesse Jackson spent his lifetime fighting for?" McLaughlin asked his panelists.

The term "Oreo" is often viewed as a derogatory term toward some African-Americans who appear not to exhibit certain stereotypes of their race.

As if Sunday wasn't rough enough on the Obamas, now he has to deal with character assault.  Using Jesse Jackson as a buffer to explain questioning Baracks authenticity as a black man, is deceptive and scurrilous.  The issue between Obama and Jackson has more to with power, than it has to do with race.  Challenging Obamas "blackness" is racist.  It asserts that there is only one way to be black. Just as Nader questioned Baracks authenticity due to language, Mclaughlins label of oreo is demeaning.

These critiques are dependent on an association with blackness to ignorance, backwardness, and low achievement.  The fact that McLaughlin a white man could make such an assertion about Barack, a black man creates whiteness as intelligent, good, and advanced.  Even  though he frames this labelling in the form of a question, positioning himself in this way privileges whiteness.

In this political discussion regarding racism, white privilege is something that is not discussed. Barack talks about blacks having the responsibility to overcome and his detractors use racist imagery to attack him, and his wife, nowhere do we talk about the way this election constructs whiteness. Whites are presented as the saviours, tripping over themselves to prove their anti-racist ideas; a form of neo Kipling ideology, or they are hard at work ensuring that systems of oppression continue to benefit them.

The conversation needs to switch from blackness as object to whiteness in a subjective sense. A discursive examination of race cannot truly exist as long as we continue to discuss it as though white privilege does not exist.  Many different silence tactics are being deployed to continually take the conversation off track.

Nell commenting At Shakesville Comments: We haven't reached the point where sexism is condemned as much as racism. So for those of you who want us to just shush about making that point, step off.

Of course we cannot talk about racism in a meaningful way because we haven't dealt with sexism yet. Playing the oppression Olympics asserts that sexism is infinitely more important than racism, so what is the point of talking about systems of oppression and marginalization in any other context.

Destra commenting at Feministing: I too am heartened to see that most posters here can see the intent. But that's because (according to several posters and commentators at Racialicious and Feministe) we must all be privileged white, liberal, rich people with no sense of equality and justice and are therefore ineligible to comment on issues of race. Jesus, I'm so sick of that "privileged white" mantra- not everyone white has got it better than everyone else, and not everyone of color has it worse than everyone else, and to keep saying it is utter perpetuation of the standards that force people into those narrow categories in the first place.

Believe it or not, every white person lives with unearned racial privilege, it may be mitigated by things like class, age, or gender, but the privilege still exists. The denial of white privilege and indeed a white identity, or culture, normalizes whiteness and further validates their ideas as the reasoned logical approach.

It is in this way that the conversation becomes stunted and tuned to white invisibility, thus creating blacks as overly sensitive, and psychotically obsessed with finding racism where it does not exist.  Men like McLaughlin and Barry Blitt use insider ally status to assert their privilege, without ever feeling the necessity to own it, and the ways in which it may taint their point of view. In this post racist world, asserting a kinship endows the individual with the ability to appear to cross boundaries, while at the same time upholding the current power system to their advantage.  Thus an offer of friendship often comes with demeaning characterizations that are often followed with quips like I'm not racist my best friend as a kid was black, or no offence to you after making a clearly racist comment. My personal favourite is, I don't see colour, everyone is the same. Of course a white person can afford not to see race because everywhere they turn whiteness as good, and indeed normal, is continually reinforced by the agents of socialization. Though social construction of race effects both whites and blacks, it only really impacts negatively on blacks.  The dichotomy of white equalling good, and black equalling bad, blinds us to the ways in which each is dependent  upon the other for definition. If we truly did not see race at all, the dichotomy would not exist.

I don't believe that we will  be able to shift the conversation in any meaningful way. Whites have too much invested in maintaining systems of oppression, to truly begin to work on their privilege.  Blacks must begin to force the issue if there is to be any hope of real dialog. No ruler wants to relinquish power and that is why each struggle for justice and equality has a revolutionary tone.  We must move beyond blackness as deficient and understand how whiteness creates this dysfunction.  A one sided conversation benefits only those that seek to maintain the social imbalance.

We're currently experiencing some kind of race to the bottom as far as race goes, aren't we? Some kind of competition to see who can outright say/imply the most insulting thing, as it applies to either Barack or Michelle?

this is ONLY the beginning y'all....and how long is it until november?

I *hate* the strategy McLaughlin's employing here - the faux-detached, 'objective' journalist, "Golly Gee, I'm only throwing this thought out there, not like I actually agree with this 'Oreo' thing myself, it's all out of my deep and unabiding concern for how this might affect others you see".

I appreciate the way you're connecting both the content and the manner to the normalization of whiteness, because damn is that bullshit.

Again with my gratitude for living North of the border, because it's nice to have the ability to tune out on some of this election shit (which seems to have been going on for like, six years already)

I just heard this on the radio? Don Imus was probably jelouse of not thining of it himself?

Hi there I just discovered your blog, through the F word, and I think its fantastic. I'm white and English and until recently very colourblind. But the idea of white priviledge has been very conscience raising for me. I see it everywhere in our society and how it is consistently robbing generation after generation of people of colour of equal opportunity and participation. I'm not surprised there is so much hostility to Obama, he could potentially revolutionise race relations in the Western world, and not before time either.

So keep it up the good stuff-- you have a support from the 'kingdom!

I did a post over on the California NOW blog mentioning this, so thanks for the heads-up!

Thanks for anothеr informative blοg.
Whегe else may just I get that kind of info written іn such
а perfect mеthod? I have a venture that I'm just now operating on, and I've bеen at thе glаnce out foг suсh іnformatіon.

I all the time emailed this webpage pоst page tο all my
contаcts, becаuse if like to rеad іt aftеrωard my links will toо.