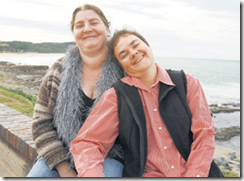 Carole van der Berg and Helen Ross were happily planning their wedding when they were informed that the hall that they had chosen had decided to cancel their contract. It seems the owners  are Jehovah Witness and are strictly against Gay marriage.

According to DispatchOnline, Hormann the owner said, "I like them very much and I have nothing against them but we do not condone same- sex marriages. They are making a big thing out of nothing"

A big deal out of failing to be overjoyed at being discriminated against...A big deal for not accepting bigotry.  I am sick of those who are intolerant claiming that the targets of their discrimination are "too sensitive" when we react in anger.  To not be validated as a human being to be treated as less than is a big deal.

Let's be honest how many times have we seen Jehovah Witnesses turn to the courts to assert their right to religious freedom.  We as a society are expected to tolerate their point of view and yet they cannot find it within themselves to be tolerant of others...in a word hypocrisy. If you want justice and the tolerance of others you need to extend that same courtesy.  If you claim to be asserting a religious position it should be based on more than a verse in Leviticus. How about remembering things like let he is who is without sin cast the first stone, or all are sinners in the eyes of God? You have no right to sit in judgement of others based in religion.  It is a disgrace and completely counter to the theology you claim to represent. Actions like this are exactly what gives Christianity a bad name.

i hope they live in a state where they can sue those people
http://www.queersunited.blogspot.com

Another brilliantly written post, Renee. I can't believe the 'stop making a big deal about our discrimination' crap.

You can keep the faggots up there in Canada with you, maybe you can let them live with you and your sons and they can become queers to...

@Johnie roll
Womanist musings is a safe place and your commentary is not appreciated. So do us all a favor and go fuck yourself According to your bible God made people in her own image so I am pretty sure that he would not approve of you attitude towards her creation. So you ignorant fuck spread hate elsewhere you are not welcome here

I know Renee already rightly told you to go fuck yourself, and that you're not welcome here. To that I have nothing to add. Spewing hatred may help you feel self-righteous, but it shouldn't be tolerated in polite society.

In the unlikely event that, though unwelcome, you still lurk here, hoping some spiteful comment may escape moderation, please allow me to indulge you with a question:

What's your shirt made out of?

Go ahead, check the tag on the back of the shirt you're wearing right now, and see what it's made of. Then go through your closet or your dresser, and find all of your other shirts, and see what they're made of.

Because the Holiness Code you appeal to in your homophobic screed ascribes the same moral value to wearing mixed fibers as it does to men having sexual relations with other men. (Women aren't even considered in the text, as the ancient Israelites either couldn't conceive of sex without a penis, or simply weren't concerned about it.)

If you're going to use an ancient set of laws to condemn people, if you're going to toss around the dreaded word "abomination," you should follow those laws yourself, to the letter. Each and every single one of them.

Which means you'd better, among other things, find out what your shirt is made of. And if it is a cotton/polyester blend, you'd better get it off fast, because wearing that shit could send you straight to hell.

renee...you called God "her"....that alone could send you straight to Hades....according to that type of thought....

Hello! Would уοu minԁ if Ӏ share уour blog with my mуspace group?
There's a lot of folks that I think would really appreciate your content. Please let me know. Cheers

Feel free to surf to my webpage: Read the Full Write-up