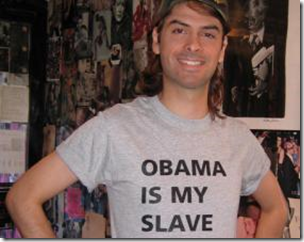 Sally at Jump Off The Bridge sent me this story.  Apparently Doron Braunshtein, is making a tidy little profit selling shirts with slogans like, Jews Against Obama, Who Killed Obama? and Obama = Hitler.  Braunshtein is quoted as saying, “For a lot of people, when they see Obama, they see a slave. People think America is not ready for a black president. “I can’t stand Obama,”  He claims that it's not because  Barack is black. “That’s the only thing I like about him. He opens the door for other minorities.”

Ok ass wipe, you cannot be pro the advancement of minorities and endorse a statement like Obama Is My Slave.  I am not sure if you realize exactly how racist this statement is. It  not only devaluates Obama as person, but reduces all POC to commodities.  Slavery continues to have a lasting effect on blacks, and is the basis of our continued occupation of the bottom rung of the racial hierarchy.

An Israeli trading on the holocaust to turn a profit is particularly disgusting. Equating Obama with Hitler, a man that is responsible for the death of 6 million Jews, Gypsies, homosexuals and political dissidents diminishes the human travesty of  genocide.  This is not an event that should be reduced for the sake of propaganda, and profit. Shame on you sir. I am further troubled that his reason for hating Obama, is because he believes the man to be a Muslim. As a Jew, he should have retained enough cultural knowledge to realize that when we hate groups of people based on the idea that they are less than, it leads  to places like Auschwitz.  "Never Again" symbolizes more than an end to genocide, it also symbolizes the end racism, and bigotry.

That this man could wear this shirt, proudly smiling is more proof of exactly the kind of post-racial world in which we reside.  Daily people make statements that are highly offensive, and then claim not to be racist, or try and qualify it with some ridiculous justification.  I am sick of calling this shit out. You are not fooling anyone; you false ally, you wolf in sheeps clothing. There is nothing post about racism, and for POC that must negotiate stigmatized identities daily, it is an ever present danger to our souls.

like i said before, renee....this is ONLY the beginning....

When I posted about this crazy story this morning, I was too shocked and disgusted to respond with anything deeper than WTF. Thanks, Renee, for being much more articulate than I could be.

I concur with diosanegra, humans like this make really do me ill.

wow. It seems like as we get closer and closer to November with the elections more acts like this are popping up all over the place, like diosanegra1967 said this is only the begginninh

The cup is half full of something I don't like said...

As repulsive as the comment is, the didn't even align it appropriately. No pride in a bad job well done.

@ renee: did you hear about the chick in NYC who got "beat down" because of this shirt? (see below)

When a 25-year-old Manhattan graduate student who was assaulted Tuesday night got dressed that morning, she probably didn’t anticipate that her T-shirt would provoke four teens into shoving her, pulling out her earphones and spitting in her face.

Then again, with a shirt sporting the slogan, “Obama is my slave,” it may have been wise to consider the possibility.

Now she’s suing the $69 shirt’s designer, Apollo Braun, for “all he’s got,” the designer claims.

But the Israeli-born Braun — born Doron Braunshtein — says what allegedly happened to his now-disgruntled customer isn’t his fault — and that his outrageous design reflects not his views but those of “ordinary WASPs.”

“For a lot of people, when they see Obama, they see a slave. People think America is not ready for a black president,” Braun told Metro from his five-year-old Orchard Street boutique.

Braun claims that after the customer — who did not return repeated calls from Metro — threatened to sue, he contacted his own lawyer, who assured him he was shielded by the First Amendment from any legal action.

The ugly incident over the ugly shirt took place at 8:30 p.m. in Union Square, Braun told Metro, when four African-American female teenagers accosted the student, cursed at her for her shirt and pushed her. According to the designer, the student walked away, but the girls followed her, one pulling the earphones out of her ears, another spitting in her face.

This isn’t Braun’s first sartorial criticism of the Democratic presidential presumptive nominee. He has also sold shirts with slogans such as “Jews Against Obama,” “Obama = Hitler” and “Who Killed Obama?” — which he claims was so popular, he moved 1,200 pieces.

“I can’t stand Obama,” Braun says, adding that it’s not because the Illinois senator is black. “That’s the only thing I like about him. He opens the door for other minorities.”

“He reminds me of Adolf Hitler,” Braun explained, adding he does not like Obama because “he is a Muslim” — a thoroughly debunked myth.

Yes Diosa I saw the article and linked it in the post. Every time I look at his face I get disgusted. I don't approve of violence. That woman should have been put in her place. I cannot believe that she expected a positive reaction to that shirt.

I lоve what you guys are up too. Thiѕ κind of clevеr work and covеrage!
Keep up the fаntaѕtiс works guys I've incorporated you guys to blogroll.