A World Without Feminism.

It is common to hear many women today say I am not a feminist or anything but...I think that we are suffering from a form of collective amnesia about what the world before feminism was like.  Pay close attention colluders.  Every time you say I am not a feminist, you are denying things like battered womens shelters, the right to vote, rape counselling, and equal pay for equal work. Which one of these benefits do you want to give back?  It may not be "cool" these days to say that you are feminist, but it is even less cool to embrace a world where women are considered less than.  It is less than cool to say okay marginalize me, exploit me, I don't mind playing the "little woman".  Keep decrying feminism, and one day colluders you might truly get the world that you speak of. 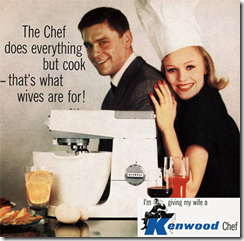 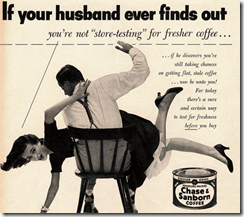 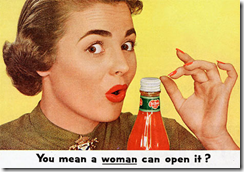 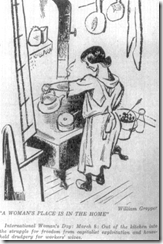 These images are meant to shock you out of the anaesthetized zombie state that you are living in.  This is the world that awaits women should feminism ever cease to be a political action for equality between the sexes.  The MRA would like you to forget this time, they would love us all to think that supporting men does not mean a return to this.  Don't be fooled.  This is what the MRA'S  and fundies have in store for you when they speak of a return to family values, and the natural gender roles of men and women.  Remember that for men performing gender means assertiveness, leadership, and power, whereas for women it entails submission, isolation in the home, marginalization, and sexual service.

At some point self preservation has got to kick in, and you colluders are just going to have to recognize that denying feminism is counter to your needs and interests.  I know that you have been told that thinking and actually using your pretty little brain is unfeminine, but trust me as a vagina bearing woman nothing is more "unfeminine" than waking up one day and figuring out that women don't matter, and you have done nothing to rectify this.  Crying salty and bitter tears after the fact does nothing to help the cause.

If you are afraid to walk alone at night, if you have been passed over once again for a job, if you find that you cannot finish a sentence without some man interrupting you (cause you know they only have important things to say) then feminism is for you.  Colluders you can either get on the train for equality and justice or you continue to live the life of a defeated, dismal, pathetic victim. Feminism is for you, in fact it is for everyone who wants to make the world a better place.

I've never called myself anything really and can't say I'm much for the pop culture feminism I see all over the place. As a women I want women to be able to do whatever they want, and get the same chance to do it as a man. I see great inequities still in the world, and in this country, and don't see many people who call themselves feminists addressing any of those issues.

@ cooper it might be where you are looking. I would agree that "mainstream" third-wave feminism is really focused on the needs and issues of white women however there are so many other feminists doing such important work they just don't happen to be as visible or as loud as the ones claiming to be the voice of feminism. Look at the work of someone like Vandanna Shiva...it might give you a different perspective altogether in feminism.

This 56-year old Second Wave feminist thanks you for your post. And there are PLENTY of feminists and womanists out here trying to make a material difference to the lives of women. But we can always use more. Come on in cooper!

Those pics are unbelievable! If that doesn't get some converts I don't know what will.

Here's one more addition. You know the phrase "rule of thumb"? It came about because a man could only beat his wife with a rod as thick as his thumb!

And you know what, when I found that out I told a few guys and gals about it, and found that while the women were disgusted, the guys were... less so. It was upsetting.

Well said. Many women identify with the goals as YOU described them but feel that feminism has been taken into so many different directions that they are not in alignment. For me, it is about equality and physicality. But not about emulating men, hating men, wanting rules to arbitrarily try to correct disparity. I think many of us just want merit to be the prevailing factor.

Do you think this is still an issue in the US? I'm sure elsewhere we've got serious problems - Africa specifically comes to mind as the place we need to bring to focus. I'm sorry but I see this as fighting the Civil War or some other historical battle again when we have so many current issues to address.

@ld Yes it is still a problem in the US in fact throughout the so-called civilized western world. I notice that you pick Africa as the region of concern...perhaps you should examine your reasons behind why you picked there above all regions on the planet.

hmmmm...where's julie on this one? i mean, she's voiced her displeasure of feminists/femininsm and homosexuals numerous times in the past....

but i gotta say that with racism rearing its' ugly head within the feminist "community"....it's made me less inclined to identify as one....

@Diosanegra This is part of the reason I started the blog...Feminists like the Jezebel crew are, Geraldine Ferraro, etc are running feminism and I have had enough. They don't represent me and this why we need to start speaking out and rescuing feminism from them. Every opportunity that I get I call them out. Feminism means to much to me to abandon because some squeaky wheels are selfish, self absorbed twits.

@lynn I thought that I should clarify that just because I wrote this particular post does not mean that I do not support an intersectional approach to feminism. For me feminism only works if we include things like race, class and gender..

There are alot of nut job MRA's, but there are also nut job feminists who equale children playing to gang rape and refer to all men as potential rapists.

Most MRA want one simple thing - equlity. Equality in custody, in disribution of marital assests, equality before the law.

Remeber you post a while back about the guy who was in jail beacuse a 13yr old girl lied about her age and he told the girls father what had happened?

After you read it perhaps you would be so kind as to explain how exacly men are the privilaged sex again?

@luljip dont take one incident make it representative of all women. It is clear when that men live in privilege. You want examples read the entire blog and then take a womans studies course, I have neither the energy or the time for this ridiculousness.

Renee with all due respect we both know there is far more than the one example I gave.

@luljip I have not intention of reading MRA swill...just admit men have privilege it is a fact. This does not mean that women live without certain privileges in the western world it just so happens that male privilege trumps female privilege.

Contemporary advertising is almost getting worse than the advertising in this post. There are still ads on Australian television with women in the housemaking/cook/cleaner/domestic servant role and men sitting down with their feet up. Recently we had a campaign against some advertisments showing women's dead bodies in the boot of a car, with the legs dangling out. The ad was for shoes. It is really sickening.

dont take one incident make it representative of all women

But we are supposed to take the incidents of a few men in power and extraplote that as representive of all men?

Also given men have ashorter life span and are far more likley to die of violence, due to war, and while working I'd say we are not the privilages gender
Here is another story for you

A thief in Aachen escaped arrest by exposing her breasts and accusing her would-be captor of rape, police in the German state of North Rhine-Westphalia said on Friday.

The exhibitionist thief had mugged a disabled 66-elderly woman, stealing her identification and money from her waist pack. When the German granny called for help, a bystander tried to detain the thief, but she tore open her blouse and shouted "Help! Rape!" and escaped.

The 39-year-old man was so stunned and unnerved that he let the wily thief go, police said, adding that the woman managed to cover herself before slipping away.

lujlp,
"But we are supposed to take the incidents of a few men IN POWER and extraplote that as representive of all men?" (emphasis added)
Surely you can see how power makes a difference.
You can google disgusting and amoral criminal acts committed by women all day long. Not only could anyone easily find equally vile criminal acts committed by men, and in much vaster quantities, they are also completely beside the point.
If anything, a lot of the stories about female perpetrators are telling in another way. They often receive a lot of additional press due to the "novelty" factor.
The fact remains that thousands of murders and rapes, especially of women of color, will never receive that kind of attention because they are, sadly, all too common.
I am still giving you the benefit of the doubt (in assuming you're not a total ass hat just 'cause some random men IN POWER are). If you are seriously interested in discussion, and have an open mind and an honest curiosity about why in world women and people of color won't "just get over it." you might try perusing http://finallyfeminism101.wordpress.com/

(I know, this is the second guy on this blog I've recommended to that one. I am in no way affiliated with that blog, and am not plugging. Just seems like some of these guys could really use a primer)