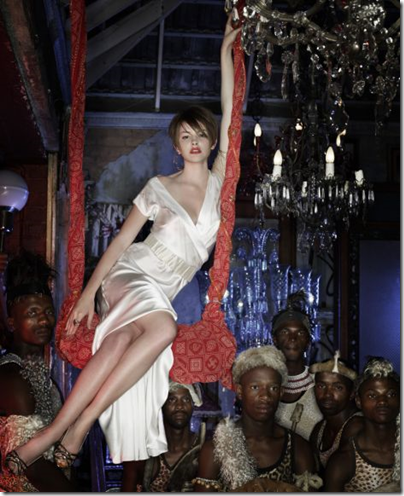 h/t F blog via Penny Red Highlights.When they sat around a room brainstorming about how to celebrate the selection of Britain's top model who decided mmm let's go with the racist image of the savage worships white princess look?  Did they think it would become the latest rage? I wonder if they consulted with Marcotte when they came up with this image?

Does it really need to be said that dressing blacks in tribal clothing at a pseudo coronation is wrong? All that is missing is the hyper masculinized white male to save her from the invading hordes,  but she is ready and willing isn't she..lips parted, suggestively posed, waiting for the conqueror to arrive. I guess we can all be reassured that this former colonial ruler still has a place for its former subjects. The post racial world that we have entered means that white supremacy is under grievous attack, and therefore it must be comforting to some that blacks can still be positioned as 'other' and subdued at will. I suppose there is truth to the saying that the sun never sets on the British Empire...some ideas don't seem to want to fade away.

Usually they show a white model dressed in white, pale clothes with little black children in the background photographed in some hot "exotic" locale. I guess they got bored with that theme.

Thanks for making me sick this morning.

every time my citizen-of-the-US-self-esteem plummets, as it has over the last eight years, i see something like this shit and remember that every country has its active douchbaggery and this is proof of it.

Yuck. Nothing like another heavy dose of colonialism in a photo shoot to make you lose your lunch. ><

I can't say I'm surprised, based on some of the stuff they do on the various top model shows. I am grossed out though.

Interestingly, it would be a much stronger image if it were the model alone, with nothing in the background. Then it would be all about the diagonal lines that her body is making and her facial expression....