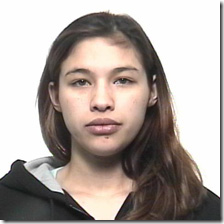 Claudette has been missing for two weeks and the police have no leads.  According to the CBC she is 21 years old and  is the mother of four children.  To find out those pertinent details you have to read through the entire article because the title of the news story is "Family pleads for help finding missing Winnipeg sex trade worker." I suppose that the CBC feels progressive for even devoting time to this story because the media routinely ignores crimes against sex trade workers, however this report can hardly challenge the media's construction of these women as spoiled identities when the title signifies that her main identity is that of a sex trade worker.

Claudette is a mother, sister and daughter but the CBC wants to make sure that you remember that she is a sex trade worker. The title of this piece is not at all accidental. By identifying Claudette as a sex trade worker instead of one of the various roles in which she participates the CBC is in effect slut shaming.  Somehow if you work in the sex trade nothing else about you matters. This approach is constantly taken whenever the mainstream media deigns to report on women like Claudette.

The reduction of women to sexual objects  is part of our social discourse.  Daily we reduce women through the patriarchal lens to less than.  When we moralize sex and legitimate some acts as good, and some acts as deviant the taint very rarely attach's itself to men.  It's always the dirty whore, the dirty slut or the dirty prostitute, while very little is said about those who procure their services. When we speak of prostitutes it is always assumed that we are speaking of a woman even though males engage in this behaviour.  Social discipline of sex, and sex acts is something that is specifically geared towards woman.  This is why the CBC can let the world know that a sex trade worker is missing  and then add in a by the way commentary that she just happened to be a mother of four as well. Claudette Osborne is missing and she is a person, she matters.

Claudette is a mother, sister and daughter but the CBC wants to make sure that you remember that she is a sex trade worker. The title of this piece is not at all accidental. By identifying Claudette as a sex trade worker instead of one of the various roles in which she participates the CBC is in effect slut shaming.

Yes it is slut shaming. The label opens up the justification for the police when/if they do not react in a timely or efficient manner. “You don’t expect us to drop everything we are doing to look for a whore, do you? We have more important things to do. She probably left on her own anyway.” Oh they want actually say it where people can here, but people who know will know how to ap0logise for the police depending on what kind of woman. The leaving on her own will be the leeway into introducing her motherhood, something held up in high esteem for some women (pretty (usually white) and middle-class) , but used against other women (the not considered as pretty, the poor, and many women of colour). Of course all of this helps the patriarchy keep everything racialised and classed as well, thus communities divided. The white pregnant middle class mother is number one priority, but uh oh, we think she has a boyfriend, oh and perhaps that boyfriend was other than white, or she lives a double life, because really we want a reason to think all those filthy whores are closet freaks. And even when the white middle class pregnant woman goes missing and it looks like the world has stopped to search for her, the patriarchy still benefits, they show how a certain type of woman is rewarded, “see if you behave like a good little girl we will look for you when you are missing, because, uh, someone needs to have our babies for our imperialist armies.” And while that narrative distracts the commoners, all the men are secretly enjoying every minute of acting like the great white knight who will find the damsel in distress. Or if found dead, to drop to his knees and cry to the Heavens that he did everything in his power to return her home, “Why God Why, I’m only one man. Yes I will take your questionings, shouldn’t that red light be on the camera if we are recording this?......I’m no hero but yes, yes I am a hero, (wink).”

Daily we reduce women through the patriarchal lens to less than.

There you have it.

@Kitty that was one bad ass commentary...wow, well said.

Thank you for publishing a more accurate account of who Claudette is.
She is one of over 625 women of Aboriginal ancestry who has gone missing or who have been murdered across Canada.MOST OF THESE CASES REMAIN UNSOLVED!
www.missingnativewomen.org