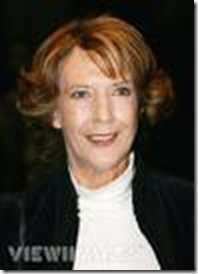 This weeks colluder award goes to Dame Eileen Atkins.  In an interview with Times Online she reportedly said the following.

Now girls are expected to have sex before they’re 12, which is terrible. It really upsets me when silly girls get as drunk and aggressive as boys. My skin crawls when I see laddish women presenting television shows who almost slap their thighs as if they’re in panto. I think, ‘Stop. This isn’t what we meant by feminism.’ It’s gone completely wrong. Women think they can have a fantastic career and four children, and knock themselves out trying to do it.

Not only is this woman confused, she seems to believe that her idea of feminism should represent all women.  Right, young women are encouraged to have sex early which is why we have all kinds of slut shaming, and purity balls.  I was also really surprised to learn  that being born with a vagina meant that I had naturally passive and submissive tendencies...gender essentialism anyone?  Finally lets not push for things like socialized daycare and job sharing programs to make it easier for working mothers, lets just return en mass to the kitchen where we belong.  Keep in mind this of course only applies to rich white woman as WOC have always had to work.

I don't know if this is just me giving the benefit of the doubt to a woman who doesn't deserve it, but I read what she said differently.

I know that in Britain, we often have yob culture shoved in our faces as evidence of 'equality'. In my opinion, acting like an arse just makes you an arse, not liberated. I'm sick of having my ability to vomit in the street and sexually harrass people without being arrested held up as evidence of my absolute liberation. "Look, we don't need Feminism any more, everything is fine - women can beat people up too!" Aping the very worst excesses of male behaviour isn't equality, it's being conned into believing that anything a man does, no matter how wanky, has value, and women should want it. Considering how unhappy many men are, we should be looking much harder at the value of what 'masculinity' is held up to be, and questioning the idea that 'equality' means acting like men.

As for her comments on women and work, I also think I see what she means. We've got this woman whose name escapes me, Anna someone I think. Anyway, she's some hot-shot merchant banker, with 4 or 5 kids, the marvelous husband, fabulous home, and 'darling' nanny. For the past few years we've had her held up as some sort of icon. The implication is that as she's got it, we could all have it if we only wanted it. The rest of us work in minimum wage jobs, doing part-time because we have to juggle childcare, because we WANT to. It's our biological destiny to be poor, because having
kids warps your brain in some way and makes you disinterested in all that 'career' stuff. We want to be paid less than men. We want to be sacked when we're pregnant, or sidelined when we come back from maternity leave. We want
to pay over the odds for crappy, inflexible childcare. These things aren't problems, because, after all, as women like the lovely Anna have 'proved', if we wanted anything different, we could just go out and get it. We're all liberated and equal now, y'know.

So yes, alleging that women in our society can have a fantastic career and four children is, for most of us, a big fat lie. That's not a rallying call to go back to the kitchen, it's an angry complaint about how women are being
lied to and fed a version of society that renders their struggle invisible. Young women buy the lie, then find the fact that they're struggling is made out to be some sort of personal moral failing on their part, not a symptom of a system that is stacked against them.

As I said, I may be giving her the benefit of a doubt she doesn't deserve, but I recognise her despair with all the 'post-feminist' crap.

If she says we've got feminism all wrong, I'd really like to see her full explanation of what feminism actually entails.

Renee, I hear you on the WOC working. It is the same for the white women at the bottom too.

Yet, I have to agree with what this woman is saying.
Feminism does mean well to women but feminists don't own the movement. It is a part of humanism and this is what I have been wanting to challenge you on.

Humanism is also equality to every living thing. Every animal and every plant. It is not about us doing better in life but about us coming down in position to be like the plants and the animals.

The gay and lesbian rights platform wants no age of sexual consent and even feminists who work with rape perpetrators are freaking out about the target for little boys and girls and what they are doing creatively.

We really should be concerned more about the powers that be than what we as women think.

The other thing is .... we think about the WOC and other nationalities in the same position having to work and needing childcare but have we considered what they have planned once the kids are teenagers.

Have we really thought this through? Do you ever wonder about the future.