Colluder Of The Week: Noelle McCathy 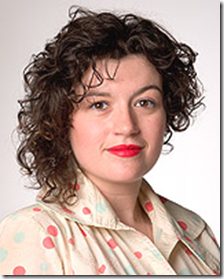 Regular readers know that I am dedicated to calling out what I term the colluders.  These are women that act against the interest of women and by so doing support our continued oppression and marginalization. Once a week womanist musings bestows a colluder of the week award to the woman that I feel has acted against the interest of women.  In my weekly news reading I came across an article penned by Ms.McCathy entitled "Noelle McCarthy: Press your shirt dear? Pass me the irony ..."  wherein she asserts that feminism is an outdated term.

How many women of my generation would consider themselves feminists? Very few, I'd wager. It's a hopelessly dated term, and also, really, a given. Most of the women I know work, talk, and live in a state of equality with men.

They're paid as much, or more, and are just as ambitious, if not more. If single, they're likely to pursue exactly the sorts of sexual relationships that suit them, and ensure their own financial independence, rather than bet on Prince Charming ponying up when the time comes.

Most women she knows would be the proviso in her assertions. It is of course not at all arrogant to assume that her acquaintances represent the women of the world.  We are also supposed to accept that she has such intimate knowledge of the women around her that can testify to a certainty that they are not doing more domestic labour, senior care, or childcare ...hmmm sorry I'm not buying it.  We are so equal that women aren't largely employed in low paying service sector work are we? No, our overwhelming representation in pink ghetto labour is just coincidental. We are all choosing part time work, or contract labour because it benefits us to be exploited in this manner.

That's not to say women aren't still struggling. The statistics don't lie; the lowest-paid workers in the world are women, the mothers and the daughters and the sisters who are still bearing the brunt of subsistence-level agriculture all over the world.

But improving the lot of women like that is a question of global economics, rather than feminist dogma in action. Raising their consciousness and imbuing them with ideas of sisterhood are not the answer to the question of whether the developing world is owed a fair price for its labour.

Right, because the women of Sierra Leone don't count as real women so why should feminism concern itself with helping to improve their lot in life. As western women we should only concern ourselves with our global positions. It is also not at all problematic to argue that so-called third world women are uniquely oppressed in comparison to western women. The argument of we are not oppressed in comparison to denies the fact that there is no such thing as a good oppression.

Not only is McCathy a colluder, she is a narcissistic colluder.  Her socio-economic position is not representative of the majority of women but when you are a classist elitist, it is quite easy to ignore the plight of the under/working class as you rush by to get your next hit of starbucks.  These invisible women are living proof that feminism has much work to do to achieve equality but why pay attention to them, living on the streets or subsisting below, or at the poverty level cannot really be that bad can it?  Gotta love living a life of privilege don't you? WOC are also not all oppressed in western society are we? In our post racial, post feminist world life is good for us.  What about women with disabilities are they living on easy street?  I am sure women like Angie Zapata who was recently murdered due to trans hate aren't routinely subject to violence either?  Unfortunately I am unable to view the world with the same kind of rose coloured glasses as Ms. McCathy.  Every where I look I see the difficulties that women live with everyday, but then I concern myself with bodies that matter.   Well MRA's McCathy is the woman for you, start salivating now, you have convinced yet another dim witted colluder to help you in your efforts to oppress women.

No, our overwhelming representation in pink ghetto labour is just coincidental.

That made my day.

False dilemma much? Or am I reading too much into this?

I was trying to edit the sarcasm out and failed to add anything back in.