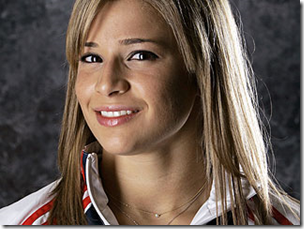 Believe it or not the woman is a talented silver medalist at this years Olympics but what are people talking about...you guessed it her sex appeal.  Can we have a collective BLECH.  According to FOX news her profile has garnered a whopping 1.4 million views.  The Los Angeles Times claims that, "immediately after the women's gymnastics competition, the phrase "Alicia Sacramone is hot" shot to No. 1 on Google's hot trends list. Hordes of web surfers scoured the depths of Google for information on and photos of the athlete." Not to be left out, there have been several Facebook pages dedicated to her.

Facebook groups sprang up overnight for fans ogling the Olympian. One was created Wednesday morning around 10 a.m. and has already netted 400 members. Group creator Tyler Herrick, a student at the University of Maryland, wrote on the message board: "Dont worry fellas ill put some pictures of her up when i get home from work. So you can imagine whatever dream youve got going there." Later, he made good on his promise.

A clear competitor to Herrick's Facebook group, reads: "SHE'S 20, so she's not jailbait!"

Combine this with the gratuitous ass shots that have become popular of the womens volleyball teams and what becomes obvious is that womens sports isn't viewed as legitimate competition, no it is an opportunity oogle and sexualize the female form.  That these women train for years for the opportunity to represent their countries is overlooked because of course everything women do is about selling sex to every ready males.

Am I just being to sensitive?  Should I just accept this as the cost of having international exposure for womens sports?  UUUUM No!  The exploitation of the female form is rampant in our society.  It is not as simple as sex sells because the flesh that is usually for sale is female.  Womens bodies are deemed to be consumable while men are on some kind of lofty endeavour to increase global unity through sport.  The sexism that the media has displayed throughout this years Olympics is disgusting and no self respecting woman could possibly see it any other way. In most photographs they don't even bother to include the head of the athlete ,just a sexy ass shot of a woman is enough to sum up her Olympic experience. I say Fuck that, we are more than parts for the pleasure of the male gaze.  The trend of showing disembodied women, or ignoring our achievements by discussing our fuckability rating reduces women to glory holes. Instead of sitting alone in your dark rooms boys vigourously masturbating to these images mentally cataloguing which athlete you would like to fuck, why don't you consider for one moment in your sex crazed desire that she might think that you are not worthy of a fuck.

Hence Anna Kournikova's status as one of the most popular female tennis players of all time, despite having never won a professional singles tournament.

I do, however, like the recent commercials for the WNBA, in which athletes like Candice Parker challenge male stereotypes about female athletes.

Since a big part of the reason physical attractiveness even exists in the first place is to judge fitness and health at a glance, athletics is actually one of the few professions for which rampant sexualization makes perfect sense. Indeed, it would seem that athletes aren't sexualized nearly enough, on account of that modern standards of beauty are so utterly detached from what actually signifies a physically-capable person that female sex-symbols are, for the most part, non-athletic.

I do not wholy a gree with her but I do somewhat agree.

And 9 times out of 10 when I state any variation of this particular problem to a man, he says "sex sells."

This upsets me because women athletes have such a potential to help young girls see their bodies as strong and active, rather than as always sexualized. Look, if an athlete chooses to do a sexy spread off the court/track/etc -fine, that's her choice. But there seems to be a growing push to actively sexualize them while they compete. Of course, what's good for the wanker trumps what's good for the kiddies, right?

And people wonder why so many women are reluctant to do sports.

Yes, when you do Kung Fu and whip around yourself in a flurry of kicks and punches things are gonna get moving. And if you have big breasts like I do, the first thing you wanna hear outside the gwoon is not: "Aw man, yo titties were a-schwinging!"

Yes, fucktard, I knew that. They're attached to my body, in case you hadn't noticed.

I don't do any sports these days, and subsequently my breasts are even larger now - much to my dismay.

But the point is: For women sports aren't just fun. Sure they might ALSO be fun, but they're not just that. All the time when sports are marketed to women they're not marketed as fun, they're marketed as something that'll make you trimmer, tighter, thinner, more beautiful etc etc. And when we actively go out there and DO the sports then apparently it's big game day for sleaze-bag commentaries.

And either the comments will be negative because we wear baggy, comfy clothes that hide any wobbling curves there might be, or we get sleazy comments because we surely must want them since we wear such skin tight standard sports outfits, where people(men) can see what we look like.

Check out the contrast between Crystl Bustos and Jennie Finch of USA Softball.

So often the media's way of hinting around the fact that a female athlete is not "traditionally" pretty is to suggest that her teammates are just pretty faces. In the coverage of Bustos, in order not to come out and say "she's not cute" they talk about how her teammates could do swimsuit spreads or look like they just came out of the same sorority.

Why can't we talk about how much they kick ass, without qualifying it by how sexy they are as they do it?