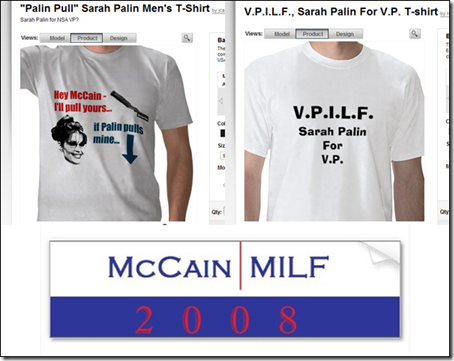 I came across this image at shakesville where they are keeping a record of the sexist attacks that have been aimed at Sarah Palin since her announcement as McCains VP pick. The speed at which the patriarchal juggernaut has moved to use sexism to discredit her is astounding.  Limbaugh (my favourite ass wipe) has already referred to her as the "babe on the ticket."

As someone who is pro woman, and pro child in all things I feel that it is necessary to say that regardless of Palins heinous politics, or standing as a colluder, the sexist attacks are patently wrong.  When one woman is devalued in this way, we all are.

While I believe that it is wonderful that feminists have gone on the immediate defensive, as a WOC I cannot help but be reminded that it took African American women pointing out the sexism faced by Michelle Obama for it to be recognized by the feminist movement.  There was no instantaneous reaction to her being constructed as an angry black woman.  In fact many prominent feminists to this day have still not spoken publicly against the attacks that Michelle received and continues to receive.  What this tells me, is that feminism is still a movement that protects, validates, and honours white women.

I will speak out against the sexism faced by Palin because I believe that it is the right thing to do.  I firmly believe that all bodies matter, however I cannot help but feel angst that this sentiment is not returned.  I won't play the oppression Olympics and point out that Michelle is stigmatized by both race and gender. I won't rehash the reasons why black women occupy the bottom of the race and class hierarchy, however I will say that this election continues to reveal which bodies truly matter in feminism.  If we are to achieve any kind of cohesion as a movement to advance womens rights we need to begin to acknowledge that sexism is wrong regardless of which body it is aimed at.  All women matter.

I don't agree with most of Sarah Palin's positions, but I do agree that the sexism is patently wrong. Hillary Clinton was faced with this on the campaign trail to a great degree and people chocked it up to her crying wolf when it suited her. Great post!

That Rush Limbaugh sure is a national treasure, isn't he?