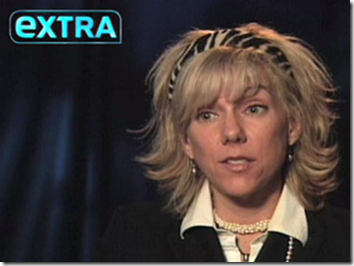 Unless you are living in an isolated cabin in the woods without internet and cable, you know that Rielle Hunter is the woman that John Edwards had a clandestine affair with.  The revelation of this fact became a 24 hour news storm that drowned out coverage of Russia invading Georgia, and the opening of the Olympic games.  Sex sells and no one is more aware of that than the smut peddling media. The situation provided the perfect backdrop to position those involved in opposition to one another.  Elizabeth Edwards was cast as the poor suffering victim, John Edwards as the sex obsessed lecher, and Rielle as the  conniving man thieving whore.

Slut shaming women is something that the media excels at, and instead of calling them out for this behaviour the blogosphere joined the chorus.  The following commentary is from the comment section of Black Political Thought.

This ho’s face is shaped like a football. A skank with an 80’s do that got lucky. She looks like a Studio 54 reject on a bad acid trip. Ho wanted one in the oven before the last egg went bad.
Edwards must have a horrific case of blue balls to bang this facially challenged space cadet. Or, maybe he was wacked on very bad weed. Phony fucker could have done better at local whore house.

She's a little rough on the eyes. What is with these politicians. Look at the lookers Bill Clinton picked up! (emphasis mine)

And From Jack and Jill Politics

John Edwards is a self centred ass. An entitled disrespectful punk. He committed one of the worst acts of distrust imaginable under the worst circumstances. He does not get a pass from me. And just because I do not know the standard terms to put him down does not mean I am not upset and judgemental of his actions, even more so then the "slut, skank, whore" that thought it was a good idea to get involved with a married political figure. If she didn't know it would not be her fault and she would just be a woman who got played. But she knew so she should be open to criticism which is going to be bad.
Just because you don't have your own happy home doesn't mean it's okay to try to take someone else's.

"Slut shaming". That statement implies it is okay to be a slut and sleep with other peoples husbands. He was wrong, no question, but she knew who he was, who knew he was married to and still thought it was okay to get involved. In that case she is a slut and should be ashamed. (emphasis mine)

The "other woman" is always constructed as the licentious whore despite the fact that she did not in any way force the man to have sex with her.  Her motives are questioned and her past history is laid bare for the world to see as a testimony to the degree of her whorish nature.  Rielle is not responsible for Edwards behaviour, she is only responsible for herself.  Edwards is presented as helpless in the presence of  free pussy.  What man can resist when a whore throws herself at him?

Merriam Webster dictionary defines whore as a woman who engages in sexual acts for money; a promiscuous or immoral woman; a venal or unscrupulous person.  From the simple act of sex Rielle is reduced to a person without morals. We do not stop to question who crafted these "morals" and who these supposed "morals" benefit.  The dictionary further defines slut, as a promiscuous woman.  When Rielle is referred to as a slut it is really a message to all women, that good girls keep their legs closed unless and until they have been sanctified by marriage.  Rielles real crime is having sex.  As much we live in a time of raunch culture, women who decide to engage in sex freely face public scrutiny and shaming. The freedom to peregrinate is solely a male prerogative and this is reified by the fact that we have no colloquial terms that are understood as descriptive of male promiscuity. Rielle is particularly constructed as deviant as much for her actions as for her gender. Before we jump on the hate wagon and assign blame we need to think about Rielle within a larger social context.  When we rail against her, expressing our puritanical desire to punish sexuality we are in fact setting rules and limitations on all female sexual behaviour.

This is a remarkable post! When I heard the news I shook my head and thought about how this woman would be framed but hadn't seen the comments you reference.

We must pay attention to the language we use. It plays a huge part in our perceptions and our communication.

While I would never think or call Ms. Hunter a slut, she is hardly blameless in this situation. Yes, the primary culprit is John Edwards, but anyone who knowingly boinks a married or otherwise attached person (provided it's adultery and not swinging) is also culpable.

@Ashley culpable of what exactly, neither committed a crime?

"He was wrong, no question, but she knew who he was, who knew he was married to and still thought it was okay to get involved. In that case she is a slut and should be ashamed"

I see this so much (he was wrong, but he is a man, after all--she should've known/done/been better)

@elle that is why I was driven to write this post. This slut shaming has got to stop, and women should not be made responsible for a mans behaviour. She was a single woman and did not "cheat" on anyone. He was the one that was unfaithful and if there is any shame to be had it is his and his alone.

Adultery is not a crime, nor should it be, but it is wrong. John Edwards violated his marriage vows, and Hunter was knowingly a party of that. They both did something wrong, they are both "guilty", but Edwards' transgression is FAR worse than Hunter's.