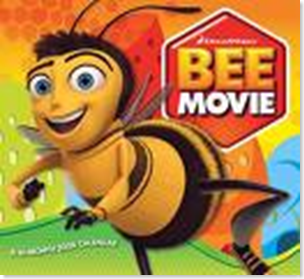 As the mother of two little guys, I have spent countless hours watching cartoons.  Some have made me laugh and smile, while others have left me with countless moments of reflection.  I recently suffered through The Bee Movie with Mayhem and Destruction.

Isn't Barry the Bee the cutest thing you have seen in a long time?  Well Barry is not only cute, he is about making a change.

"A recent college graduate, Barry wants more out of life than the inevitable career that awaits him, and every other worker in the New Hive City - a job at Honex...making honey.  Barry jumps at the chance to venture out of the hive, and soon encounters a world beyond his wildest dreams.  When Barry inadvertently meets a quirky florist names Vanessa (Renee Zellweger), he breaks one of the cardinal rules of beedom - he talks to her. A friendship soon develops, and Barry gets a guided crash course in the ways of the human race. When he shockingly discovers that anyone can just buy honey right off the grocery store shelf, he realizes that his true calling is to stop this injustice and set the world right by suing the human race for stealing the bees' precious honey."

From this little synopsis it would seem that children would gain a lot of positives from viewing this movie.  They would learn about the need to stand up for personal beliefs, the interdependency cycle of the environment, as well as the importance of agency and autonomy.  Not bad for a DreamWorks flick...That is until you realize that what they mean by human is white.  That is right, all of the main characters that are not bees are white.

Making POC invisible even in the imaginary world of cartoons is racism.  Why should my 7 year old not be able to see himself reflected and understood as human?  The very idea that Bee is suing all of humanity, should mean that various races, creeds, religions, sexualities and abilities receive equal representation .

The idea that able bodied heterosexual white people constitute humanity erases the experiences of many, and this is the invisible message that comes along with our little friend Barry.  Shame on you DreamWorks, though I must admit that I am not all surprised.  I am sure that they felt that using the voice of Chris Rock to portray a character was enough, but when POC are so visibly absent what does the presence of one POC indicate but tokenism?

Daily cartoons like this teach our children what people they should value.  Whiteness as a representative model, and the erasure of bodies of colour is a common theme in media.  It has become so normalized that we rarely question why these bodies are missing.  If POC are only represented as "ghetto" (see Chris Rock character) does that not encourage the idea that a race hierarchy is normal and natural?

Jerry Seinfeld is the creator of this little innocuous flick.  This man has a history of ignoring POC, or using them as the punch line in a joke. On his smash hit Seinfeld, there were only two recurring characters that were black - the lawyer and the owner of the coffee shop that they visited.  It can therefore come as no surprise that when he turned his attention to children's media, he continued this trend.  If presenting white people as the main focus can "work" on the small screen, of course it should translate well to the big screen.

Lest we forget, we can also credit him with publicly coming to the support of Michael Richards on the David Letterman show, after his famous racist attack. Yeah, my buddy is a good guy and didn't really mean all of the racist shit that he said.

White parents want their white kids to see positive representations of them.  Whiteness as good is an important message that must be reinforced if the white supremacist state is to be maintained.   I am tired of spending my hard earned money in the support of white supremacy.  My body matters, and so do the bodies of my children.  Barry may have been concerned about humans stealing, but I am more troubled by the idea that certain bodies don't count as human.

Thank You!!! I really, really disliked this movie for so many reasons. It was just...stupid. Straight white "people" as the sole humans (oh and the ever so charming guest appearance by Ray Liotta and steryotypical "southern" drama queen lawyer), the entire premise was illogical and misguided. AND - did you notice that the "moral" of the story really was that the underclass bees actually benefitted from serving humans? That irked me the most.

And what's up with all the male bee workers? I've always thought that it's biology 101 that all the workers in a bee colony are female, and the males basically only exists as the queen's boy toys. "Pollen Jocks" my ass.

As much as the scriptwriters can't handle a human society where people of colour have a prominent (or any!) role, they can handle an insect society either where the males only have a small role. Big *BEEE* suprise.

I liked "Seinfeld," but with both Jerry Seinfeld and Woody Allen (whom I don't like) you just have to wonder about someone who can look at NEW YORK and not see any people of color.

Wall-E also had kind of the same problem. I mean you did see a few POC, but most of the surviving humans were white. I'm sure they were all American. I find it pretty unbelievable that no other countries had ships. Makes you wonder whom they prioritized when they left Earth in the Axiom. Could it have also been those who were most able to afford it?

This happens in most animated films - the white, usually male, characters are the heroes. POC, when they exist, are reduced to stereotypes. Definitely not the world view I want to teach my children.

Wow, does every movie have to have an equal representation of every race, religion, gender, and orientation? If it bothers you, don't see it. This is akin to people who complain about South Park being offensive. If it offends you, then explain to me why you are watching it! Sometimes I think political correctness has gone too far. If Jerry Seinfeld is the creator, then he can choose to represent whoever he wants, as it is HIS film. He does not have a responsibility to every human being.

Yes, anonymous, he can choose to write, represent and show anything and anyone he wants. He has the freedom to do that, and WE have the freedom to call him out for creating fantasy lands where people who look like ME or my family do not exist, and then marketing it to our children. He didn't just make this movie for little white kids, and I'm sure he wants more than little white kids' money, so I think the point we are raising is : Why not give an accurate representation of the world we live in? I am thankful to live in America, so when people exercise their RIGHT to make movies that in no way accurately reflect our modern day world, I have the RIGHT to voice an opinion about it. In your own words, if you don't like it....don't read it.

And another thing, asking to be represented, asking to have my existence as a person of color ACKNOWLEDGED has nothing to do with political correctness. I exist. I am here.

I so totally agree with this post. Films like 'Bee Movie' was a huge blockbuster success and I imagine was made to be a positive, family-oriented, feel-good animated film. This is propaganda unfit for impressionable children of a myriad of ethnicities.

My cousin who's a little girl, LOVES the Disney princesses and everything she cherishes has Belle, Princess Aurora, Ariel, and oh yes, Jasmine in an orientalist belly dancer costume, on it.

Being Malay, like me, my cousin might never see her ethnicity ever represented in a Disney/Pixar/big Hollywood film, but a variety of peoples would always help.

"Why not give an accurate representation of the world we live in?"

Uh...Because it's a movie. A Disney/Pixar movie at that. Last time I checked, talking bees weren't an accurate representation of the world we live in either.

@anon an all white world creates bodies as invisible. That is simply unacceptable my and stretch of the imagination.

I saw this the other day and immediately thought of the bees as slaves and subservient. They did all the work while the humans (whites) reaped all the benefits. (I was wondering when the subject of reparations was going to pop up!) Barry even makes a comment about the bees being "slaves to the white man." I believe he says this during the courtroom scene. And don't forget, the judge is black (I think Oprah did the voiceover.) There is also a black man in court who slithers away from the white people he's seated next to when Barry begins to rant about the injustices.

When the bees are finally able to take a well-deserved break we get to see what happens when they aren't around to contribute to society. How things fall apart.

In a nutshell, to me, it seemed like white people in "Bee Movie" are made to look like the perpetrators of evil.

My god people, its a film... you lot are the type that would suck the fun out of all life because it always has to be perfect in films, books and artwork! Well life isn't perfect... get a grip! You are the worst type of racists! Yes... i just called you all racists because in my head there isnt a different between colours or religions but you force me to think that there has to be a difference. its sickening...