Can You Spot The Lesbians? Lohan and Ronson Are Out In Public Again.

I am not a big reader of celebrity news.  I find most of it to be trite nonsense meant to function as junk food for the brain.  Living in the 24 hour media world though, I have been unable to avoid having it unwillingly foist upon me.  Usually I read the glaring headline and move on to something more relevant to the issues that are dear to me. 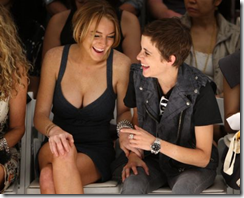 In the flashing of headlines I learned that Lindsay Lohan is dating Samantha Ronson.  No big deal, two women dating time to move on.  Even with my limited attention to celebrity news what I cannot help but notice is that every time there is a story about these two women invariably in the title or somewhere in the body of the article the reporter makes sure to mention that these women are lesbians, and that they are dating.

Lesbian, Lesbian, Lesbian...the media wants to be sure that we are aware of this fact as though it is any of our business who Lohan gets to double click her mouse.  I find this trend to constantly make her sexuality an issue disturbing.  There is never this sort of hysterical declaration of straight celebrities.  You will not find a single article with a picture of a straight celebrity screaming in a declaratory tone, heterosexual, heterosexual, heterosexual.

When we think of sex and female orgasms, it is always constructed as something men give to women, or what I have termed the Passive pussy complex. (note link contains graphic images) Can we even call what these two women do in the dark sex?  If sex is understood as a man inserting his penis into a vagina, thus bestowing on an extremely lucky woman an orgasm, then no we cannot define what these two women do as sex in our heterosexist understanding, and this is our failing.

The hetero/homo binary informs much of the media's treatment of Lohan and Ronson.  Heterosexuality must never declare itself, whereas homosexuality must always declare itself, thus announcing difference to the world.  Heterosexuality is dependent on homosexuality to be understood as normal and thus socially we constantly discipline bodies that are GBLT.  It is done for the sake of affirmation that yes indeed, you are sharing your lust and genitalia in the right and normal way.

Patriarchy also plays a huge role in the ways in which Lohan and Ronson are treated.  Women's bodies are socially constructed to constantly be consumed by men.  For these two women to reject the great dick and find love with each other, is an affront to the idea that a man is a necessity in the life of a woman.  Patriarchy depends in part on projecting and promoting the idea that fulfillment for a woman is simply not possible  unless there is a man actively engaged in her life.  For generations one of the worst insults that could be hurled at a woman was the label of old maid.  To this day there is a panic in the black community because of the supposed lack of eligible black men, for black women to marry.  Dear God the black women are living without a dick to submit to, how will we survive as a people?

We seriously need to move beyond the point where two women fucking is headline news.  With all of the shit going on in this world, our obsession with other peoples sex lives is ridiculous.  What Lohan and Ronson do is none of our concern, and they certainly should be able to exist in peace and happiness without the media playing spot the lesbian every time they dare to enter the public sphere.

I look around my world and I just don't get what the big deal is...why is it still something we have to say ... such a bore.

Who is Lindsey Lohan?

I know that sounds like I'm being smart, but it's only partially meant to be so. It's also partly to make a point; who is she that I should CARE who she's sleeping with? I have enough problems dealing with my own relationship, why should I (or anyone else) be that interested in her sex life? Matter of fact, hers or anyone else's? Anyone who is so all-fired engrossed in who Lindsey Lohan or anyone else is sleeping with (other than their mother), anyone who gives a hoot whether she's sleeping with a man, a woman, or a kangaroo, anyone to whom it's important who's keeping Lindsey warm at night and making her happy, needs to get a life.

A post that my co-blogger Maggie just put up suggests that we try to hide any view of lesbianism that doesn't conform to the for-males fetish variety - which makes the media's relationship with L.L. difficult. She and her girlfriend are types generally portrayed as attractive by the media, so that conforms to the male fantasy, but the two seem to have no interest on putting on a show and then leaving the party with guys - so. What's a poor tabloid to do? The answer, I fear, is to run another 'Lesbians!' story whenever a 'sexy' photo like this one surfaces (lesbian cleavage!), but avoid talking about same-sex couples in any way that would erode their Other status.

i kinda like the media focus on her possible lesbian or bisexuality cuz it forces a lot of people who think gays are all freaks to see that we are in every corner of society, the rich, the poor, the hot, the ugly, the smart, the dumb, etc

Isn't that weird? They seem really happy, so why does anyone care?

Interesting.....
More celebrity news seeps into my consciousness that I would prefer, so I've seen several of these photo-plus-snippet-of-useless-info "articles" about Lohan and Ronson. Most of the ones I've seen have really avoided using "Lesbian" and instead refer to Ronson and a "gal-pal." Not sure where that term came from, but it rubs me the wrong way....

I agree with you. Straight people don't need a parade to show how they like their sex, why do the non-straights need to constantly shove their sex in my face. Keep it behind closed doors please. :)

1) Your commentary is lesbophobic
2) You completely missed the point of this post
3) Homophobia is not welcome here
4) Straight people don't need a parade because everything in society affirm heterosexuality
5) No one is shoving anything in your face, people have the right to express their love and your intolerance is your issue.
6) One and only one warning, Womanist Musings is a safe place and if your cannot refrain from homophobic messages don't comment...the next instance of this in your part will lead to an immediate deletion of your commentary.

It is none of the business of others actually but since they are celebs, i think some make it as a trick to be talked about....not Lohan though for she is still hot and popular till now.

I hate the phrase "gal pal" - it seems to imply that lesbian relationships aren't on the same level as hetero ones. Ugh.

In addition to sensationalizing it, much of the media coverage (... if I can call it that...) won't go past "Lindsay's gone gay" or "Lindsay gives up men!" lesbianlesbianlesbian, like there's no room for bisexuality.

Hardware Bob: at the very basic, decontextualized level, you're right, but the question is why is it a simple equation? Why is heterosexuality the norm? Why is it that queerness gets people reading and talking? And, even though it's a simple equation, as you say, how media approaches (presumably) queer celebrities still has social and cultural impact on our consciousness.

@ uppitybrownwoman
"Why is heterosexuality the norm?"

Are you really that stupid?