Daniel Edwards has made quite a name for himself sculpting famous figures.  Art is meant to cause us to step outside of ourselves  and touch us on a very personal level.  We are meant to question everyday actions, and what they truly mean. 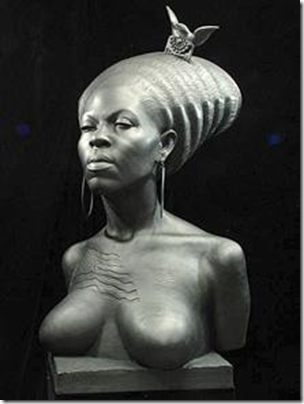 "The bust, entitled "Michelle Obama's Makeover for America" goes on display at the Leo Kesting Gallery in New York on October 1."  According to the telegraph Edwards said, "The goal is to create a look for Michelle Obama that eliminates excessive comparisons to Jackie Kennedy."What does this bust accomplish but to reify the construction of Michelle's body as other? Yes, the African Queen masquerading as a "real" American.

With an afro pic in her hair and the American flag carved into her flesh, depicted this way she does not resemble the accomplished, confidant woman that she is.  The despair on the face with the half closed eyes reveal a person who is defeated.  A broken, and angry woman who has been subject to repeated abuse is what this bust represents.

As a WOC despite her current class privilege, Michelle has been subject to racism and sexism, however this has not made her into the broken vessel of misery that this bust portrays.  This is the woman that racists and sexists would like Michelle to be; to downtrodden to fight the good fight.

This "art" does not challenge, it seeks only to recreate the marginalization that already exists.  Those that carry racists and sexists beliefs will feel reassurance at having their image of Michelle elevated in this way.  WOC will once again bare witness to our social 'othering' wondering silently, when will a black woman be worthy of being shown in her full glory?

This is....unbelievable. I cannot believe how racism and sexism are inscribed on this statue and this man thinks that he is making some sort of homage?

Yea when I saw this I was like you have to be kidding me.

This is unbelievable. Wow, just wow!

While I agree and can see your analysis about how he has made her "other" I also see a resemblance to the Queen Nefertiti bust.

I didn't see her face set in a mask if despair. To me she looks strong and with a long gaze that has a knowing something behind it.

HOWEVER, the American flag carved into her skin really fucking bothers me. To me I see a label of ownership. It makes me think of the branding done during slavery..especially with how "African" he's tried to go with this representation.

"To me I see a label of ownership. It makes me think of the branding done during slavery."

I'm really bothered by the way the breasts are displayed in such an "available" way, it's the Mammy depiction that Renee's written about in other posts.

I can understand that the artist *may* have set out to give a sympathetic rendering of Obama, but it ends up portraying her as a victim with no agency (esp. the way her shoulders are so pulled back, as if her hands are bound).

What really bothered me was this -- "The goal is to create a look for Michelle Obama that eliminates excessive comparisons to Jackie Kennedy."

So take away her personal style, (which does remind people of Jackie Kennedy) and re-do her entire look into something that is clearly NOT Michelle Obama? Ridiculous. Especially for the fact that she's 'branded' by the American flag. I checked out the link to some of the rest of Edwards' work, and the rest is not much better.

it's even more bizzare because this looks nothing like michelle and everything like a stylized nina simone.

I'm not sure which I find more strikingly awful:
-how much this bust resembles some of Carrie Mae Weems's work, which was meant to be a critique (which suggests to me that either this sculptor hasn't read up on his black female artists, or he's just that clueless)
-the scar-like ripples of the flag on her chest

This is exactly how I felt. I contacted the art gallery in New York and the RACISTS had the NERVE to try and tell me to read some letter to distract me from an OBVIOUS racist charicature.

The time is now. FIGHT this image. Call these people. Recreate your image. Black men DO NOT have your back. Change this before it becomes PERMANENT in american society.