In The Category Of Gratuitous Sexism, The Emmy Goes To...

So, like many TV junkies I sat through the Emmy awards tonight.  For TV viewers the fall means the return of beloved sitcoms, enjoying new media offerings, and the endless cycle of award shows.  As a closet television addict, I certainly could not miss the Emmys.

In the first twelve minutes of the show, I found reason to be disgusted.  Considering that the media is full of sexism, perhaps 12 minutes is a long time to go without doing something that demeans women in some way.  The five presenters this year were, Ryan Seacrest, Tom Bergeron, Heidi Klum, Howie Mandel, and Jeff Probst.

In what will probably go down as one of the worst openings for an award show ever, they rambled aimless attempting to be humours for a few minutes.  They did however build a failsafe into their routine. Tom Bergeron commented on how covered Klum was.  At the beginning she was wearing a  tux, just like the other hosts.  I believe that she actually looked quite fetching, and I loved the fact that it was gender neutral.  Of course that could not be allowed to stand.  A woman at an event has to be wearing something eye catching and sexy.  People are after all, not tuning in to see their favourites get an award, but to see the famous tits, and long legs, hanging out of designer gowns.

To ensure that the viewers got their share of Klum, William Shatner was invited on stage where he along with Bergeron proceeded to tear off her tux, revealing the appropriately sexy little black dress.  Thank goodness, because all that lack of flesh was so upsetting to my gender normative sensibilities.

Thank heavens there will always be sexism to bring about a cheap laugh and thrill when comedy fails.  Enter Brooke Shields, who is an accomplished woman by most accounts.  It is wonderful that the writers thought to comment on her achievements, but I was even more delighted with the line, "having my hand on your behind is a sign of respect," from her male co-presenter.  Gee Whiz, would squeezing your balls till they oozed semen be considered an equal sign of respect?

These award shows are all about integrity.  They go to great lengths to make sure that the viewing public is aware that all of the ballots are secret and appropriately accounted for.  You know this because the accountants who were escorted by beautiful trophy escorts told you so.  These men could not come on stage and assert that everything was on the up and up...nooooo, such a thing could never be allowed because masculinity needs a trophy vagina to be recognized as valuable. Yeah I truly believe these men, and everyone knows that to be a legitimate man of power you need a hottie on your arm. 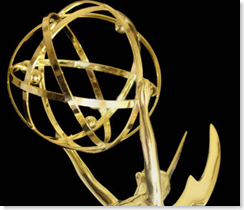 Final niggling point...Do we really need to keep splitting the categories into male and female?  Are these ACTORS doing something different because of the gadget between their legs?  I do believe that Kyra Sedgwick is more than capable of standing up against Bryan Cranston. It is further troubling that the female awards are always presented first.  It is a great way to build momentum and excitement for when the "real awards" are given out; you know the ones given to the men.

So, I watched the Emmys, and was once again unimpressed. This years award  (at least until the Oscars) for promoting sexism and maintaining gender binaries on an award show goes to....drum roll please....The 60th annual Emmy Awards. Cue bad orchestra music.....

I agree completely. At first I just thought that the opening was the most boring and ridiculous open they ever had but when they did the bit where they ripped off the tuxedo, I felt the same way you did.

"would squeezing your balls till they oozed semen be considered an equal sign of respect?"

"would squeezing your balls till they oozed semen be considered an equal sign of respect?"

I have to agree with this post! It seems like the media, movies and TV programs are using tons more sexual innuendos and lots of naked flesh to promote shows. It's hard to believe that Heidi Klum agreed to such disrespectful treatment. It's sad!

Wow. It doesn't sound very entertaining to me. Glad I missed it, although I do have to disagree with your assesment that a tuxedo is gender-neutral. Just because a woman wears a traditional men's garment doesn't make it any more neutral than a gentleman in an evening gown.

Glad I missed it, although I do have to disagree with your assesment that a tuxedo is gender-neutral.Just because a woman wears a traditional men's garment doesn't make it any more neutral than a gentleman in an evening gown.

Here's the thing, ALL clothing is gender-neutral. It's clothing and, like all objects, it has no gender except in people's sexist minds.

Anonymous: Would those panties in a wad be yours?

I was hoping for a wardrobe malfunction that took her dress off too.