Iraq: We Are Winning The War 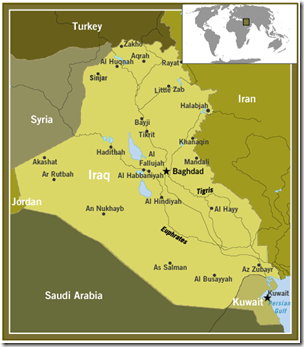 McCain repeatedly touts the surge as a success for "stabilizing" Iraq. The war is usually framed in terms of American sacrifice and very rarely do politicians or pundits examine how it has effected Iraqi women.  Americans want to see themselves as the great civilizing force; on a new age Kipling like adventure.

Prior to the first gulf war Iraqi women operated with many freedoms that were not standard across the Middle East. During the Iran/Iraq war, women were needed to fill in as men were increasingly fighting or dead. Positions such as career military officers, oil-project designers, and construction supervisors, scientists and engineers, doctors, accountants and jobs in general administration which were historically male occupations suddenly became open to women.  In 1980 Women attained the right to vote and run for office.  In 1986, Iraq became one of the first countries to ratify the Convention on Elimination of All Forms of Discrimination against Women (CEDAW).  All this in a supposedly backward country.

Today women are living in fear for their lives.  Their standard of living has been marketedly reduced. Many have been forced to work as prostitutes in Syria to support their families.  There are more than 1 million Iraqi refugees in Syria, but they are legally barred from working, and thus prostitution became the only option for many women. They have become the sexual toys of rich Saudi elites who vacation in Syria.

For those remaining in Iraq, Unicef has some startling information.

1)Every day dozens of women are widowed, and the number of families struggling to cope without a wage-earner is starting to overwhelm local social services. Paid work for women is scarce (only 14 per cent of women between 16 and 60 years old currently employed, as opposed to 68 per cent of men, according to a 2006 World Food Programme survey)

2)With threats to girls attending school on the increase, more and more families are being forced to choose between education and safety for their daughters. A 2003/4 national survey indicated that of 600,000 children out of school, 74 per cent were girls. Girls’ attendance rates are falling fastest in the central Iraqi provinces of Anbar, Baghdad and Diyala.

4)Among 37 newly appointed ministers only four are women. And only 25 per cent of Iraq’s parliamentarians are women.

Honour killings are on the rise.  Though there is no law forcing women to  veil but the repercussions for wearing western clothing have the potential to end in death.

According to AntiWar.com, Several women victims have been accused of being "bad" before they were abducted, residents have told IPS in Baghdad. Most women who are abducted are later found dead.

The bodies of several have been found in garbage dumps, showing signs of rape and torture. Many bodies had a note attached saying the woman was "bad," according to residents who did not give their names to IPS.

Women's lives have changed, and women are beginning to look different across most of Iraq. They are now too afraid to wear anything but conservative dresses – modern clothes could be a death warrant. The veil is particularly dominant in areas under the control of militias. Women are paying a price for the occupation in all sorts of ways. Confined to home, many women live in isolation and depression.

Despite the ideology of bringing civilization to the brown people, which is part of the social discourse defending this war, it is clear that the living conditions for the women of Iraq are daily getting worse.  American intervention has not brought uplift.

When McCain repeatedly quips, "we are winning the war", I cannot help but think what does "winning" really mean?  To men like McCain, it means less Iraqi resistance to the American occupying force; and thus a reduction in American deaths.  This means that the deaths and the living conditions of Iraqis are irrelevant to what is considered success.  The Eagle with a wing dipped in blood has brought destruction and mayhem.  Since women and children historically constitute the most vulnerable section of society is it any wonder that they are suffering to the degree they are? Isn't civilization a lovely thing?