Obama The Half Breed 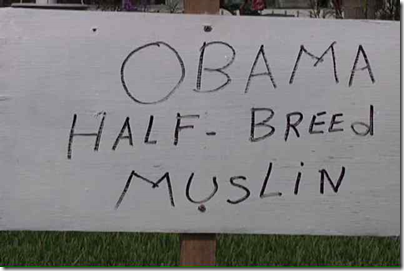 This clearly offensive sign is being displayed on the front lawn of Andy Lacasse.  Apparently he was a die hard Democrat before Obama won the party nomination.

"I got nothing good to say about Obama," Lacasse told News 13. "If I see anybody touching that sign, I got a club sitting right over there. That's the Democratic Party. They're nothing but a bunch of cutthroats," Lacasse said. "Like I always said, you show me an honest politician, I'll show you an honest thief. Look what he's doing to Palin," Lacasse said, referring to Alaska Gov. Sarah Palin, Republican John McCain's running mate. "Come on. He got people going to Alaska, looking for something to say bad about her."

Politics is not a not a "clean business," and while he is willing to disparage the Obama campaign  for looking to discredit Palin, he makes no commentary about the fact that the GOP have continually slurred Obamas message, as well as used difference to perpetuate racism.  Why is it acceptable for McCain to attack Obama at will?  He is upset by Obama simply because socially it is believed that blacks should capitulate to whites, due to the history of the master/slave legacy in the US.  Already the Obamas have been referred to as "uppity" for having the temerity to be educated and successful.

Though Lacasse claims that his issue with Obama is how he is running his political campaign,  the "tone"  of his message makes it clear that the issue is about Obamas race.  The term " half-breed" is especially offensive in that it implies that he is not worthy because his body can not be read as, nor understood to be white. When we consider that white men have always controlled the political power in the US, calling Obama a half breed is an attempt to delegitimize him as a body worthy of running because of his race.

In the second half of his protest he falsely refers to Obama as a Muslim.  Obama has many times asserted his religious faith to be Christian.  I wonder where this idiot was when the Reverend Wright fiasco was occurring.  Clearly he had been attending a Christian church for many years, and this defeats the idea that Obama is Muslim.  Another point that is also troubling to consider, is even if true, why should being a Muslim make him disqualified to be POTUS?

Though the US is a Judeo-Christian society there is a separation of church and state for a reason.  Religion cannot and should not be held against an individual.  Right now the current trend runs towards Islamophobia.  Muslims are treated as though they are social threat because of the actions of a few that have wrongly used Islam as a basis to perform violence.  Yes the complaints are legitimate but violence cannot be a solution. While Lacasse feels free of accusing Obama of dirty politics clearly the issue is who does  the action, and not the action itself.

Lacosse claims that this is a freedom of speech issue.  He is displaying this highly racist and inflammatory sign on his property.  While it is his right to display his ignorance and hatred to the world, it is also my right and the right of those that are like minded to inform him that such ideas have no place in an evolved state.

correction, he attempts to call obama a muslim, but fails and instead accuses obama of being muslin, a type of cloth.

Please excuse my sense of humor (or lack of). It's the cramps talking.

Yeah, I was going to point out the spelling error as well, but then I realized I'd probably get slammed by the anti-Obama camp for being an elitist spelling snob.