The Black Man and The Cool Factor 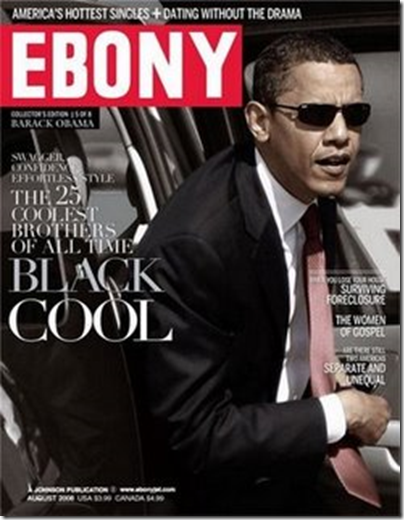 Why would I have a problem with the "cool black man" imagery?  At first glance it seems as though this is a new way of understanding black masculinity.  The media and social construction has continually projected black men as violent, drug addicted, rapist thugs and the label of "cool" seems like some sort of transcendence. 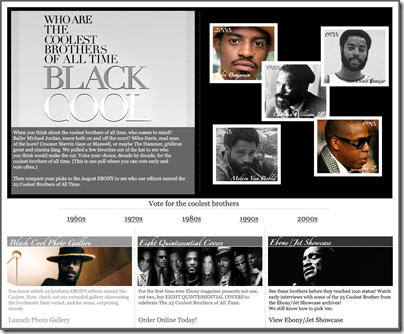 This is yet another construction that is limiting to black masculinity.  Coolness comes with certain rules that must be adhered to, to be legitimized.  It certainly would not be cool for these men to suddenly decide to challenge gender norms or appear to be effeminate in any way.

Coolness is something that is not associated with white male masculinity.  Coolness exists outside of access to real power and is reified by the persons ability to perform.  Men that are cool present a show rather than experience real emotion.  They are by predominately actors, musicians, orators and social organizers.  What we have decided is cool is the public persona; whereas the essence of their being is hidden from view. 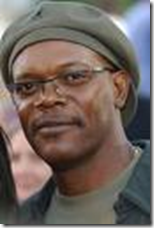 Coolness tells young men that their life is to be lived through the lens of the expectations of others.  It is not about speaking with a unique voice or asserting personal autonomy.  When people sit in a movie theatre waiting for Samuel L. Jackson (the current granddaddy of cool) to say motherfucker, so that they can cheer, does that not indicate that Jackson is just as much trapped by the coolness factor as he is liberated by it.  Jackson cannot afford to weep, or show tenderness beyond a cursory tear because coolness does not allow for that.

Coolness even comes with a uniform.  Notice the requisite dark glasses adorning

the faces of these men.  Cool but yet menacing, capable of aggression and yet restrained.  Coolness is all about the possibility rather than the actuality of real thought.  It is about what others think that the individual is capable of rather than their own personal limitations.

To be cool one must wear the height of whatever fashion is currently envogue for men.  It is all so so very carefully styled so as to appear a transgression, when in actuality it is conforming to what is expected.  For the intellectual cool, it is the dark suit, and white shirt (Obama, Malcolm X), for the pop culture cool, it is the brand name (Usher, Terrence Howard) and for the athletic cool, (Michael Jordan) it is whatever Nike will pay you to wear.

We live in a society that does not promote individuality; conformity is what we learn from the beginnings of our socialization.   Coolness gives black men another identity option but it comes with the same sort of limitations as any other social identity and we should not be blind to this.  It is as binding as a straight jacket and limiting to the potential of the individual.

As I thought about these covers the one question that kept reoccurring in my mind is: why is it that coolness is overwhelmingly associated with black masculinity over and above any other racial group?  There have been white men that have been considered cool, but that has always been in absence of the presence of a black male, e.g. Fonzie on Happy Days; whereas black men carry their coolness factor in every environment regardless of who is involved.

Coolness is still an aggressive masculinity.  It does not seek permission,  and demands attention at every turn. In the presence of it, one must always be on guard because of the controlled savagery just beneath the surface.  It is when you link the savagery, or threat of violence, or even aggressive sexuality it becomes clear why coolness is associated with black masculinity.  The link is in existence because coolness only reifies the social constructions that have been associated with black men.  The so-called cool black men still exist with all of the negative stereotypes but what differentiates them from the so-called average man is that he has managed to garner a small degree of control over his instincts.

We are meant to be attracted to the facade and yet still be apprehensive because of the possibility that control might be fleeting.  It is the possibility of danger that draws us in and hold us captive.  It's like dancing with the devil; dangerous with the potential for evil and yet orgasmic in the proximity to power. Sex and violence lie behind the facade of Mr.Cool  and it is for this reason that black men must not embrace this construction.  It does not liberate the body from the animalistic tendencies that have been associated with masculinity, it only works as a tired facade that accentuates difference.

I agree. Some more things that this restricting coolness precludes: geekiness, or being musingly slow or openly thoughtful, or being offbeat in any way that isn't already categorized.

The first thing that crossed my mind when I read the title was what was what you describe in the latter three paragraphs; of course, better than I could have.

I'm glad you posted this Renee. Even though associating the black man as "cool" is way better than previous thoughts about black men this is still not good. The fact is color should not be indicative of cool or non-cool, if we truly are to be an accepting society we will see beyond the color. We won't associate all black men as being "cool, "thugs" or Asians as being "smart" "weak" whatever the stereotype is.

Society does only promote conformity. Then you are truly an individual then you often get laughed at by the corporate drone of conformity. Its really a sad society thats out there.

"The media and social construction has continually projected black men as violent, drug addicted, rapist thugs and the label of "cool" seems like some sort of transcendence... This is yet another construction that is limiting to black masculinity. Coolness comes with certain rules that must be adhered to, to be legitimized."

I don't disagree with anything you've said here, but I think it begs an interesting question -- is there ANY construction that doesn't limit us, that doesn't get in the way of us living as free individuals?

As long as we continue to live lives through the lens of social construction no individual can ever really be free. Not only is behavior highly disciplined, but so is language and this encourages conformity and mediocrity.

How possible it is to live a life free of social construction I cannot say. The problem is that even before birth the body is already embedded with various meanings, some favorable and some damaging. I do believe at this point the best that we can hope for is a progression wherein we chose to adopt more positive attributes.

So many people cannot acknowledge the privilege which comes with race and gender that change on such a systemic it will take generations to undo. I personally believe in micro activism. This is why I blog. I believe that conversation is our greatest chance to make transformative changes in society. This is why I encourage everyone to speak out. The more we engage in unpack privilege the better chance we have of overcoming it.

Right on. I also don't know what is or isn't possible at the level of a society, or have some magical system or solution. But I do know that for individuals it is possible to see more, understand more, and be more free. So, yes, micro-activism and conversation. Thanks for talking about this.

Hi Renee-
I always appreciate what you write, and learn new things each post I read-- and this post on coolness is even more insightful than usual. I'm really struck by your analysis of the LACK of power of 'coolness'- I'd never thought of coolness as being so problematic (and constraining). Even better, linking this general concept to an analysis of black masculinity is eyeopening. I am just so inspired by your critical insights and by their (your) constant relevance. Thanks so much-