I clearly believe in ally work.  If one truly believes in justice then it is necessary to advocate for equality for all.  Ally work can be stressful and sometimes painful, but it is the right thing to do.  Some people believe that because they advocate on behalf of marginalized bodies that they deserve a cookie.   Just like a puppy being house broken they want a treat for doing the right thing.  The following is a list that many erroneously believe that they deserve a reward for.

Avoiding the aforementioned behaviour is part of acknowledging the humanity of another.  Expecting the marginalized body to issue you a cookie, or a stamp of approval is yet another display of privilege.  It is really quite simple, you either believe that all people are equal or you don't.

If you really feel the need for a cookie may I suggest seeing him. 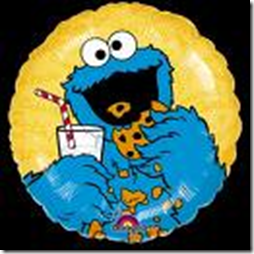 I would say, anything which does not require some degree of sacrifice does not deserve a cookie.

This, of course, will change from time to time and place to place.

Saying "Sure, I don't think women should be under pressure to do X..." doesn't deserve a cookie, especially when you end the sentence with "...but if they don't, they shouldn't complain when they don't get a boyfriend."

How about continually expecting me to be married but not with child. Since I do have a Ph.D. people seem to understand that this required a sacrifice concerning children (their perceptions of course because they find it hard to believe that not having them is a lifestyle choice) but they still always assume I'm married.

If you pick up the mantle of activism or decide to be an advocate for any cause....don't expect cookies. If you can't do it for the betterment of the cause instead of the self glory....stop, turn around, and do something else.

Making it all about YOU.

"I think this [insert reference to racist/sexist/homophobic/etc joke] is funny, but I won't say it b/c I know stuff like that bothers you."

I have been reading this blog for a bit, and I am sure this shows my ignorance, but I can't work out what 'cis' means/stands for. Google has been no help at all.
Can someone help me out?

"Cis" in this context is short-hand for "cisgender," which means someone whose sex matches their gender, as opposed to transgender. It's comparable to cis-trans isomerism from chemistry.

@groovyjoss..cis is short for cisexual which means the body and mind are aligned in terms of gender..Some will use terms like biowoman or bioman which I personally hate. When someone is being cisexist it means that they are using the privilege of having been born with gender and body alignment to oppress trans bodies. For a better understanding may I suggest checking out either transgriot or questioning transphobia. These are two really great blogs that deal with cis privilege and the discrimination faced by trans people on a daily basis.

Going to another room to continue telling rape jokes because you finally noticed the 5 women (who you KNOW have dealt with rape in their own lives) have been yelling at you to stop and are now covering their ears and humming (because you ignored them asking you to stop) so they don't have to hear your "jokes" anymore does not deserve a cookie!!

Substituting moral outrage for analysis, particularly the analysis of submission.