Chris Rock: Kill The Messenger, Too Bad It Wasn't The Gong Show 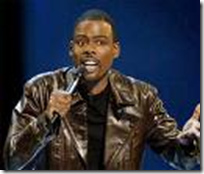 Well Tami, of What Tami Said definitely has the right to say to anyone that watches Chris Rocks latest HBO special I told you so.  I don't know if Rock has suddenly become more ageist, sexist, fat phobic, and classist, or my understanding of isms has grown over the years.  I know that I was not fond of how his last special because the last 40 minutes or so were dedicated to misogyny.

This time around not only was Chris decidedly unfunny there were times when he was downright offensive.  I spent two hours listening to his infantile jocular humour trying desperately to stave off sleep.  Had I paid for this, Chris would owe me a refund, as it is I am down two precious hours of my life that I could have spent with my children.  That is two hours I could have spent cleaning my house, or feeding my sick addiction to reality tv.  This special sucked so much shit that I don't think that even if you combined all of the weed I smoked in my pre parent days, that I could get high enough to have one honest to goodness pee till I almost wet myself laugh.  The damn munchies would have gotten to me long before I was amused by a damn thing he said.

What I saw on that stage was not a man that is happy in his life.  What I saw was a man who despite his successes and wealth, is decidedly unhappy.  This time around what clearly came through is his pain.  I don't know exactly what is troubling Chris, but Tami is right he needs to take his issues and run, not walk to the nearest therapy couch.

When he started talking about McCain and Obama I thought I was in for some succinct hard hitting commentary only to hear some tired old ageist garbage.

How are you going to make decisions about the future when you ain't gonna be here. He's old, the motherfuckers to old.

You see how he hired his nurse to be his vice president.

Right John McCain is too old to be useful.  There are many things on which to critique McCain on, frankly the man is an easy fucking target, so why lower yourself to focusing on age, thus creating a whole group of people as other? You would think a stubborn bulldog, with grandiose ideas on American power,  who has a penchant for calling his wife a cunt would open a myriad of opportunities for legitimate humour.

Barack Obama really want to be the president he gotta get himself a white girl, cause a white girl will play her position. The black girl wanna play your position..You get you a white girl, she'll do exactly what you need her to do. And Black women get mad. As soon as y'all get a little money you want a white girl, actually before we get money.

When I hear the ABW shit from O'Reilly and his crew at FOX, I am  offended but to hear this come out of the mouth of a black man just enrages me.

Your mama is a black woman, you are married to a black woman and your two daughters are going to be black women you dumb ass.  What kind of example are you setting as father by standing on a stage and loudly running down black women for profit.  Just what two little black girls need, a father that does not value black women.  Since you seem to love Barack so much why don't you try modelling some of the respect he has for his brilliant wife Michelle, and the two beautiful daughters they share..

As each minute of this "special" went on I became increasingly more irritated. Then he said it...he had the nerve to say it, and I think I popped a vein in my forehead when I heard it.

Pussy is like visa accepted everywhere. Next time you ain't got no cash say do you take pussy.

Now your precious daughters can learn that not only are they potential ABW's, they will also learn that the  only thing that will be valuable about them when they reach adulthood is what is between their legs.  It won't matter if they are intelligent, creative, caring, or beautiful, all that will be discounted because they have a vagina.  The most disgusting thing about it is that they will have first have heard this pass from the lips of their father.  From the mouth of the man that is supposed to love them unconditionally for a lifetime, they will learn that they have zero value.

I don't know whether or not to be more horrified by the spew spilling out of his ignorant mouth, or the fact that the audience was filled with people who found this funny.  Men and woman alike sat there and guffawed loudly as Rock employed bigotry to minimize people.  He was ageist, fat phobic, size phobic, classist, and sexist over the course of two hours.  When will we as human beings ever decide that this kind of thing has no place in our world?  When will we stop paying our hard earned money to affirm the acceptance of this kind of negativity?  This wasn't two hours of comedy, this was two hours of noise pollution.

I don't know if Rock has suddenly become more ageist, sexist, fat phobic, and classist, or my understanding of isms has grown over the years.

I don't know either, but one way to check might be to watch his older material, which is available on the Internet, if you can spare the time. For instance, this well-known routine of his: http://www.youtube.com/watch?v=IZtQUEY1IU8

I think I did laugh at Chris Rock once... a long time ago.

Your post is spot on and puts into words something I have been thinking for quite some time. Thank you.

He sounds miserable.
I couldn't be married to a man who spewed such hatred towards black women under the guise of comedy. To me it would be exactly the same as being married to a white racist.

I haven't seen this special yet, since I don't have TV service anymore and haven't had HBO since college. I've always had a love/hate thing with Chris Rock. He's an educated, funny man with good delivery (and a damn good writer: Keenen Ivory Wayans)- his criticisms on race relations are often hard-hitting and disturbingly accurate. But then when he starts talking about women...it gets a little difficult for me to follow. He's against racism, but a certain amount of sexism is ok? And yes, there are some sexist jokes he has made that I've laughed at- because I appreciate that they are well-crafted. Comedy is an art form that often offends to make a point. He often says offensive things to draw attention to issues. But he has some things that cross the line to down-right degrading. He is comfortable in a very retro, outmoded POV about relationships and gender roles. He needs to step into this millennium.

I've never understood how men with daughters can say such things. Gender seems to be the last, uncrossable barrier for a lot of people. This is why I adore feminist men -- to have got that far, they've had to understand everything else (at least in my experience): racism, homophobia, ableism, you name it.

What I saw was that Chris Rock "jumped the shark". He was not funny,the production of him shifting between a suit and an annoying, shiny black jacket. He was just not unfunny,but he played into so many sterotypes.The N word jokes were horrible.

If you're not a fan or didn't think it was funny then that's ok but don't be ignorant and make a comments and judgments about someone's happiness or unhappiness b/c of what they say during a standup routine. They are an entertainer. Most also have writers so most of what they say isn't even their opinion or view. The entire production was planned the way it was for one specific purpose: to show that people around the world laugh at the same things. You prove you're a sensible and worthwhile individual when you can laugh at the stereotypes. It's called Don't Kill The Messenger, but apparently you all missed the point on this one. Because you ridiculing and "killing" the man. Your opinion is your opinion but when you realize your opinion should be kept to yourself and you should focus on your success and not belittle others, then Chris Rock and other comedians won't have the material to offend you.

It's really not that serious. All the other TV shows and movies out there that say worse about black women, gays, presidential candidates and their wives and you all getting upset over his lame special. There's bigger issues to be mad about and blog about than Chris Rock.

I thought it was funny. Some parts were a little lame, but when you know it's just comedy you don't get offended. He wasn't talking about everybody. And you don't know what he teaches his daughters. Just because you say something for comedy sake doesn't mean you believe or practice that in your everyday life. I'm sure he tells his children they are valuable. We have to start separating the person from the entertainer. How somebody is on stage is NOT how they are in real life.

"Now your precious daughters can learn that not only are they potential ABW's, they will also learn that the only thing that will be valuable about them when they reach adulthood is what is between their legs. It won't matter if they are intelligent, creative, caring, or beautiful, all that will be discounted because they have a vagina."


i'm actually going to attempt to explain how humor works, because apparently, the facets of comedy seem to escape some ppl.

chris rock is not saying that women should use their vaginas as currency. his statement is funny because it relies on the pre-existing premise that men will do anything for a piece. the line is unexpected and, and consequently sparks a laugh response.

The ones defending Rock and his stupidity and tiresome 'jokes' are NUTS with a capital N!! The man is the epitome of a buffoon and just because humor is suppsoed to sometimes shock and offend DOESN'T mean you have to go out of your way to do so. At least when Carlin or Lenny or Richard Pryor said something thought as offensive they had a p-o-i-n-t Rock is just another black idiot comedian who thinks playing on hate that he suppsoedly depises will get money and laughs. He is just another lowest-common-denominator race-baiter who will sell out his own momma[and apparently has]to make a buck so what the HELL is there to respect or admire in that?!!