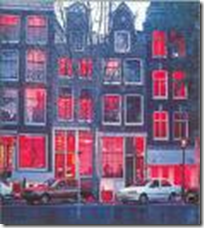 Holland, the land of the famous red light district, has decided that it is time to tame their "dirty girls".  To encourage women to give up their lives of prostitution, the state has created a points system for good behaviour.  Can you believe that, a point system, isn't that what parents use with children to reinforce good behaviour?

According to The Independent, "prostitutes will receive so-called "street miles" that they can use to acquire free designer clothes or furniture, provided they take up an offer by the city council to take steps leading to a career change and a safer lifestyle. Some of the "dames", as they are known locally, have already been given a makeover involving designer clothes to boost their self-confidence."

OOOh golly gee whiz designer clothing, don't all women just want to get dolled up?  It is so easy to achieve as well, as all the whores have to do is keep their legs closed and the state will help them hide their sins by cloaking them in respectability.

It would seem to me that if you want women to stop engaging in prostitution it would make sense to offer them a little thing like job training, or education subsidy.  Simply offering women a new wardrobe ignores the reasons why they become involved in prostitution to begin with.   How about cracking down on the trafficking that is occurring? Not all women that are working as prostitutes are doing so because they want to.  What about counselling for the women that have been abused, or drug rehabilitation treatment for the ones that have issues with substance abuse?

In their desire to police behaviour there is no acknowledgement that some women willingly choose prostitution.  They don't feel exploited or abused and in fact enjoy their jobs.  Knowing this,. if the state is truly concerned about women it should also be attempting to to make this job safer.  It should ensure that all crimes committed against sex trade workers  are investigated, as well as working to build relationships between the police and sex trade workers.

Simply rewarding them with makeovers and a new wardrobe reinforces the idea that the only thing that is valuable about them this is their bodies.  Sex trade workers deserve better than to be the object in a state plan to discipline sexual behaviour.  What they need is to be recognized as human beings with the same goals and desires as anyone else.  To be told to be good girls and we'll make you look prettym only serves to further devalue them and reminds all other women that unless they conform to the sexual chastity that society considers appropriate, they too will be deemed persons of little or no value.

I just don't like this idea of "street miles," its very odd!

Well, this Street Miles is a something which the press likes because it is weird, but it is part of a much larger programme which the Dutch government has been investing in for more than a decade.

There's still a long way to go to solve the issues in what is a large business in the Netherlands, but this programme has already done a great deal. For example, a full 'corporate-style' health-care system for sex workers (not just the basic 'Ziekenfonds' which everyone has a right to). Training and development is available to all Dutch people at a much lower cost than in the US, and there is active work being done to encourage sex workers to go back to school.

Of all the countries in Europe, it is probably the Netherlands which most strongly recognises sex work as a career and wants to make it possible to do this as a career, safely, whilst doing everything possible to stop the trafficking and forced sex work which was a big issue (and is still a terrible tragedy in France, Italy and the UK).

The Street Miles system was brought into place in Eindhoven as part of a way to bring structure into the lives of sex workers and alongside the airmiles type system which the newspapers are enjoying reporting, there are coaches to help sex workers regain control of their lives and community spaces for sex workers to get together in a safe space, outside of the view of their pimps who, whilst rarer in the Netherlands than elsewhere, are still a problem.

@emily S: While the Netherlands are taking laudable actions wrt to sex trade workers, I have to agree with Renee that this "street miles" thing is a big FAIL: It does nothing to ensure safe working conditions for sex trade workers, and it feels like a pander to the "shut your legs" crowd.

@GallingGalla: I agree with you that the financial incentive of the Street Miles programme is wrong (and dripping in sexist views of what a street worker would value). It maybe wasn't such a good idea to let two design schools come up with the ideas (which is where this programme was started upon the request of the Eindhoven city government).

My point was that I'm a bit miffed with the press for ignoring the rest, especially the coaching and safe space parts of the Street Miles programme. That's what will really make the difference when added to the Dutch government's global programmes.

Christ, I agree this is awful and agree with everything Renee said, but EmilyS is right, too. The Dutch are over the top better than we are in the US in offering services and resources to their sex workers (as opposed to our "solution" of maligning, imprisoning, beating and murdering them).

But of course western media prefers to focus on this sexist, sensationalist, frivolous, craptacular story. The rest is too boring to report on. I normally like The Independent as an antidote to US coverage, especially of foreign affairs (read Robert Fisk and Patrick Cockburn), but this sucks.

"To encourage women to give up their lives of prostitution, the state has created a points system for good behaviour. Can you believe that, a point system, isn't that what parents use with children to reinforce good behaviour? "

*sigh* That is really sad - but I'm also not surprised. Way to keep on infantilizing women, especially women who work in the sex industyr.