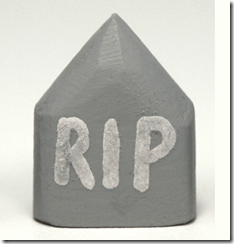 At 3:15 am Jezebel quietly left this world. This will not be a passing mourned to the same degree of Mammy, but it is still necessary to acknowledge that a spirit has now departed.

Throughout her lifetime Jezebel was not a particularly complicated figure.  She existed mainly for the pleasure of others and had few joys in her life.  Jezebel was a highly physical being in that she was understood in terms of the pleasure that her body gave to others.  Though she was always understood as wanting sexual satisfaction  her sexuality was the creation of others.

Jezebel was born the minute the first black female slave was raped by her white slave master.  From that time until her death she existed solely to justify the ways in which white men expressed their power over black women.  What passed as sex during slavery was indeed rape because the power differentials did not constitute the available agency for black women to willingly  consent.

To this day much of what occurred is still considered by some a love affair.  People speak of the ways in which white men occasionally openly lived with black women, or granted her and children manumission upon their deaths.  One

of the most famous love affair myths is what occurred between Jefferson and Sally Hemings.  When someone has the power to have you legally flogged, sold away from your loved ones, or even put to death what real option is there to say no, if you have the slightest ounce of self preservation in your being?  Jefferson was nothing more than an opportunistic rapist, but he will not be understood that way because the Jezebel caricature that has been used to warp black female sexuality has been employed to justify his actions.

Emancipation did not bring the end of the rapes.  They continue on to this day and Jezebel forms the basis of defence for the rapist.  It is believed one cannot rape a woman that is always desirous of sex.  Even though rape is not about sex and is an expression of power, when it comes to black women we understand what occurred as sex.

Though sex is a natural act we have socially constructed it as dirty, and therefore what better person to express your deviance with than the one that has historically remained at the bottom of the race hierarchy.  Jezebel is a construction that is uniquely applied to the black female.  Though all women undergo a degree of slut shaming, the black female body can never be redeemed because it is understood that her body is meant to be available for use.

This has caused many an internal conflict when it comes to sexuality. For as long as Jezebel continued to live and breathe black women could not express a healthy and  evolved sexuality.  Always in the back of our minds we needed to be aware of the ways in which our desires or wishes would be used as justification to violate our bodies.

The only people that are saddened by the news of Jezebels passing are those that have become use to abusing black female bodies.  With her death black women will experience a freedom they have never known; the freedom to safely express our sexuality without immediately being called licentious, and the ability to have enough autonomy over our bodies to have our consent or denial of access  to our bodies recognized.

Though it is not appropriate to speak ill of the dead, you shall not be missed by me Jezebel.  Rest in Peace

Very eloquently put. I really hope not to sound ignorant, but did a particular event inspire this post, or did you just decide not to put up with the idea anymore?

Either way, it's wonderful.

Hmmm... I am not sure how to digest this one?

To me, "Jezebel" was always a "White Trash", "Trailer Park", "Homewrecking", "Whore" (From a Southern States POV of course.). Or the historical Jezebel of the Judeo-Christian Scriptures.

There has never been a WOC relation to it.

But my description of the White Woman with that name was never really cemented in my mind, because I myself, considered myself a "Homewrecking Slut", because of my promiscuity, and dehumanizing of women in my youth, due to an incident as a child. (Which I really need to tell Renee about for some compelling reason! Been wanting to get it off my chest, but not in public first! LOL)

So I might get more from this article if I watch the comments than trying to dissect it. :-)

@Amelia as you know I spend a lot of time deconstructing social constructions on this blog. I have simply gotten fed up with the ways in which black female bodies are understood and therefore I have decided to write a eulogy for each social stigmatization that would have me understood as less than. The first one I wrote was a eulogy for Mammy.
This net Eulogy in this series will be for Sapphire.

Hmmm... These Eulogies are inspired by and or for folks...

Not to be paranoid or anything, but...

@LBP These are written as Eulogies because I am personally rejecting these social constructions. I do not want them attached to my body. The Mammy, Jezebel and Sapphire constructions are harmful to black women. Just as a doctor would try to eradicate disease these my attempt to end something that is harmful to me as a WOC.

As you can see, I am not an expert in Black Women. LOL

@LBP you might recognize sapphire as the angry black woman. She is constantly ripping the men around her apart and is generally displeased by everything about her life.

WoW! That sounds just like the "Homegirl" desc. I gave you in the toolbar, she fits that desc to a tee. I always felt bad for her.

Ooops... I am dragging this off-topic, sorry

@LBP I predict that Sapphire will have a serious accident in the next few days forcing me to pen a eulogy on her demise.

Renee, not to derail, but what was the resolution of the "Color an Indian" kerfuffle? Enquiring minds want to know! Apologies if you've posted it and I missed it somehow--

Thank you, thank you, for mentioning Sally Hemmings! So, so, many history books (the first time I heard it being mentioned was sometime in the 70's, I think) call her his "mistress", or "lover". Cac asail(that's something very rude in Irish Gaelic)! Your man raped her! He bought her and he raped her! How difficult is that for anyone to understand? Sorry, just venting.

This reminds me of when I went away to college. Everywhere I went white men approached me as if I were a prostitute. This puzzled me because I was then and am now a frump. I've never dressed to attract attention. Imagine being 18 years old and having strangers approach you wanting you to participate in a threesome or spank them. I finally understood that what made me a potential whore was that I was a black woman. In the same way that white students assumed that I was from the ghetto, on welfare, etc., white men assumed that I was a whore.

My boyfriend the nerd had a completely different problem. Since he was a black male white people assumed that he was a drug dealer. It got to be really tiresome.

I really like both of these posts. Deconstructing an offensive stereotype's history and meaning and putting them to rest has some real power.

Have you read Emilie Townes' Womanist Ethics and the Cultural Production of Evil? She addresses all the same institutionalized stereotypes you're focusing on, and I'd be interested to hear what you think about it.

Full disclosure: Townes is currently the Dean at my school and I've taken a course from her in which we read her book. Still, it's a good book.

Quality posts is the important to be a focus for the people to go to see the web page, that's what this site is providing.