McCain has resorted to using racism to help energize his base.  Though he claims that he has openly repudiated such tactics, the fact that these so-called "fringe" supporters continue to congregate at his rallies speak volumes about how people interpret his message.  Had he been a candidate about hope and change those that see the world through a lens of bigotry and hatred would not be so attracted to him. 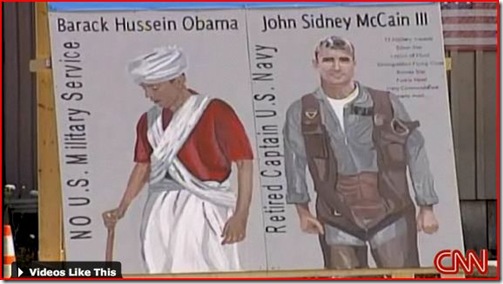 The above image is only the most recent display of bigotry on the part of those that are supporting John McCain.  Throughout the entirety of this campaign racialized imagery has been used to paint Obama as an "other", and yet these are somehow not understood to be an exercise of white privilege.

When someone can assert that a link between Islam and Obama is problematic it is certainly a reflection of the degree of islamophobia that is alive and well in the US.  Whether or not Obama is Muslim, which he is not, is indeed irrelevant. He is a US citizen which means he has the same rights as any other citizen under the law. The problem is that whiteness has become accustomed to having the law be relevant only in terms of words, but not in deeds.  Yes equality for all, as long as it does not infringe upon white privilege.

Images like above seek to remind us of what constitutes a real American. Notice the usage of McCain's full name to the point of the inclusion that he is the third such person to bear this name.  He is further portrayed in military guard to remind of us what the maverick has done .  How can anyone of good conscience vote against someone who is so clearly branded in Americana?  Placed next to this image of Obama it is meant to infer that  McCain is as American as apple pie; and that Obama conversely is a racialized "other", that cannot be associated with guarding the sanctity of  American lives.

While the attempt to interject race into this election will certainly garner a few supporters, it will definitely alienate many.  By choosing to privilege whiteness in this way it ensures that bodies of colour who see themselves as portrayed as less than by the McCain campaign, will seek a candidate that at the very least respects their value as human beings.

The media has begun to point out the degree of racism employed by McCain supporters and this has caused him to finally seek to mitigate some of the damage that his rhetoric has caused; however it should not be forgotten that this action was only taken in response to charges of racism and was not undertaken by McCain for the sake of standing up for equality. Had he not interjected race into the debate in the first place such denials would not be necessary.  McCain and his representatives only ever act in response to behaviour they are never the first ones to speak against it.

If McCain wants people to truly believe that he does not support racism he needs to be clear that these kinds of people are not welcome at his rallies.  He needs to make it clear that he disapproves of the racist campaign posters and signs that have been cropping up all over the nation.  Speaking in reaction rather than speaking because of an impetus to ensure the equality of all beings ensures that race will continue to be used as a campaign tactic.

Why is McCain wearing a codpiece?

Come on, if you're going to design racist, bigoted poster propaganda at least do it well.

This is so racist and ignorant it burns. Seriously. Only someone that knows nothing about Islam would even for a moment consider Obama to be a Muslim.