Time To Clean The Closet: National Coming Out Day 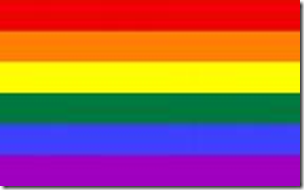 Today is national coming out day. The Bilerico  Project has some great articles up today. Here I am a straight woman writing about an event that supposedly has nothing to do with my life.   As I went through puberty, I did not have to deal with my sexuality as something that people viewed as strange or deviant.  It was considered normal and natural for me to be attracted to men.

People will occasionally stare at us and make unkind comments, however that is not because we are a cis, heterosexual male and female engaged in a relationship, but because we an inter-racial couple. Not very long ago a love like ours was something that we would have had to hide.  People would carry  on about the children that we might produce and claim that we were flouting the laws of nature.

These arguments still exist, but not to the degree that they once did. The unhusband and I lead a life that does come with its own set of unique complications, but neither of us feel that our lives are threatened for loving each other.  When I see people struggling for the right to get married it reminds me very much of the struggles of inter racial couples to have our love accepted by society.

Yesterday Connecticut struck down the ban on gay marriage.  It really made me happy, but at the same time it saddened me to think that there are still so many  places where gay marriage is not accepted.  There is no difference between the love that the unhusband and I share and those gay couples seeking to get married.

It saddens me to think that of all of the things that we have decided to police and discipline in this world that love is something we have deemed abhorrent.  Love is the greatest of human emotions. It is love that elevates us beyond our narcissism, cruelties, and petty rivalries,yet it is something that we have decided is socially unacceptable  when it occurs between two men, or two women.  Love between people that are gay is not a threat to society because anytime we feel real love for another we are expressing the best part of what it means to be human.

On national coming out day we should take the time to listen to the stories of the GBLT community and look to see the ways in which they mirror our own existence.  Love should be bringing us together as a people and  not tearing us apart.

The GLBT Alliance group on our campus always would go out the night before National Coming Out Day and chalk the sidewalks. My current husband always wondered why they did it at night if it was supposed to be a "pride-type" of event. I consistently tried to explain that on our conservative campus they probably felt safer doing it at night. It never quite seemed to get the fear that they might have lived in. It took his brother and his best friend both coming out for him to finally grasp the issues and deep seated discrimination and hatred that community faces

Great post. It's always great when an ally comes out in support of LGBT rights. I have to say that also appreciate the allusion you made to interracial relationships, since I've been trying to use this argument to explain to my parents--who are an interracial couple--why gay marriage is so important both semantically and as a civil rights issue. This as opposed to just civil unions, which, to me, fall into the category of "separate but equal," which we all know never is.

"but because we an inter-racial couple. Not very long ago a love like ours was something that we would have had to hide. People would carry on about the children that we might produce and claim that we were flouting the laws of nature."

Black people also were not allowed to marry each other due to them having no rights at all in america just over a 100 years ago. And their children we're also considered a threat to white society. There families were also torn apart due to hatred towards them. So lets not forget all the people who suffer from people trying to tear their families and community's apart.

@Ebony I have never denied the issues that the black family has faced since setting foot in North America. By using the example of inter-racial relationships what was I was attempting to do was show a personal link to this ongoing discrimination.

after being married for 20 years...I met the love of my life...who happened to be a woman. I didnt ask for it or see it coming and I still dont understand how "that" form or love could be "the" love I was needing and wanting all my life...I just didnt know it. Unfortunately for us...she is from an extremely conservative society...married as well...and we are doomed before we even start...but still we love. Love doesnt care about rules and regulations..about culture and skin color...about gender and norms...it just is. Im now since divorced (reasons not to do with her) but most likely she never will get divorced as thats not accepted either in her society...I am amazed at the "rules" we continually enforce on each other all in the name of religion...the whole "Im right and your wrong"...Im superior your inferior" the "my God and my Gods rules are the only ones that matter" are the very base for all forms of discrimination and hate on this planet...I say if we want to unite and hate something...lets all hate religion...sigh!

Sorry for the rant...this post issue is a hot point with me.

At my college, the GLBTU used to erect a big door with a mic in front so you could emerge from it and announce that you had "come out"! Then again, I probably went to one of the gayest schools on the East Coast. :) They did it right on the quad. Awesome.

But I totally agree with you on the inter-racial couple thing. Another issue is this: I identify as queer, in that I am attracted to men & women. I just happened to fall in love with a man. I'm also bi-racial (White & Hispanic) and my partner is White. But most people see me as White. I feel a certain amount of guilt that I have what some would call an "alternative" identity, and while other people have to fight to stay together or be recognized or looked down on, I don't have that. (Well, for the most part. I look boyish, so there are some problems that occur there.)

It makes me sick that so much racism & homophobia still exist. Why is my relationship supposed to be any more "legitimate" just because I don't announce everything about myself to everyone? And why should anyone have to get approval for love: which is the most natural, beautiful thing in the world?!

I just came across this post through twitter and wanted to thank you once again for being an ally.

No thanks necessary. I believe in the cause of justice for all people.