Who Is Afraid Of The Big Bad Penis 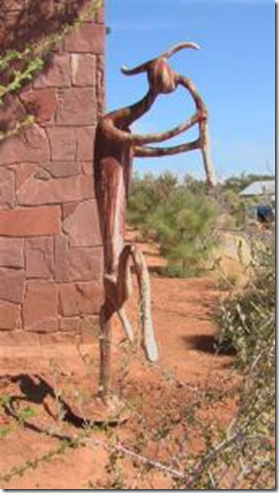 This is a photo of American Indian-inspired statue of a humpbacked flute player that was on display at Edge of the Cedars State Park in Utah.  The park, in Blanding, is the site of an ancient Pueblo Indian ruin, as well as the modern-day museum. It has been on display for the last 19 years and was made by Joe Pachak.  I actually find the image quite compelling but apparently some people were offended because it has obvious male genitalia.  Ooooh big scary wooden penis.  Well the puritans caused such a stink that the sculpture which depicts a Hopi clan symbol  was removed from the public gaze and placed behind the museum.

Somehow for the last 19 years this statue has managed to be on display without corrupting society.  The world did not come to an end.  This is not some work by Maplethrope which I do believe has a time and place. How is the world damaged because of a piece of wood symbolizing a penis; unless we are meant to all be socially threatened by a penis?

What I find disturbing is that culturally we constantly display women's bodies. In fact the female body is often either overly sexualized or strangely disembodied. Culturally the female nude is not understood as problematic, but yet the mere symbolic reference to a penis is deemed disturbing.

The female body is to be displayed because it is assumed to always be available for consumption; whereas the male body is covered because patriarchy is the oppressor.  Nudity in this way is understood as vulnerability.  Since males dominate the world the idea that even symbolically that a male could be seen as vulnerable is threatening to patriarchy.  This is not about morality this is about gender and power.

All bodies exist with power but not all bodies exist with equal power. Patriarchy controls not only what is seen but what is not seen.  By controlling our view we are forced to see the world through a male guided lens.  It is only when we take the time to deconstruct the unseen that we can truly conceptualize what is behind the desire to take any action.  People are continually attempting to express power or act in maintenance of it.  Power is an element in almost every action.  When the kind of suppression occurs we should all pay attention because incidents like this are an exercise in male power. When we think of the world and how it is organized we must all consciously be aware that what seems like an act of instance is often fraught with much larger implications.

Why didnt they just put the statue on the roof? Seems like a waste of perfectly good wood to just put it in a closet somewheres. These kids are so wasteful today.

I find the comment about wasting wood disrespectful to women. Where is the blog administrator when you need her?

damn renee, I don't even want to know what that person said if you censored him

On the Statue Note: it's ridiculous especially considering what the depiction of the phallus meant in many ancient cultures.

So do we get an explanation as to why all the deletes? Or do we just do a "Daily Kos", and make something up out of thin air, and call it true...?

Personally, as a male, I would venture the statue got the axe because it was better endowed than the male visitors to the museum!

Husband: "This is sickening, it should not be in public!"

@LBP as per the comment policy on this blog, racist, sexist commentary will be deleted. Calling women cunts and ordering them to suck dick is never going to see the light of air on this blog for as long as I run it.

Well how was I supposed to know? That is why I asked! :-)

The "C Word" is actually forbidden for me as well, having 5 daughters at home, there is no need for its usage, if I am going to teach them the word has no literary value.

At LBP, I did leave that "C" word, as well as the "N" word up in 3 comments, because I did not want to censor, but a commenter made a logical argument for their being C*** & N*****, that way the thought could still be seen, but the outright power of them removed.

I am not suggesting you do that here, I am just saying I can relate to having to make decisions on racist and sexist comments, their literary value, and where the line between freedom of speech starts, and stops in different venues.

What is the most disappointing about this whole comment thread, is that you did not give me an LOL for my "Woody" quip...

And BTW, as a "poor mans patron" of the fine arts, I would have seen the appendage as just more of the depth and breadth of the artists vision. Those that would isolate it away from the overall concept are simply cretins posing as critics.