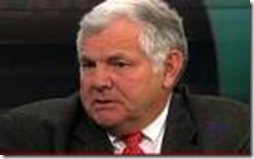 When I wrote a post entitled Anti-Racist credentials regarding people using an Obama victory to declare racism dead, I did not expect to be proven correct so soon.  Bill Bennett a former Secretary of Education displayed his privilege with pride on election night.

Anderson Cooper: I mean, if he does become president, and it still is an if, does anyone know what this means in terms of change of race relations in the United States, or perception of?

Bennett: Well, I'll tell you one thing it means, as a former Secretary of Education: You don't take any excuses anymore from anybody who says, 'The deck is stacked, I can't do anything, there's so much in-built this and that.' There are always problems in a big society. But we have just -- if this turns out to be the case, President Obama -- we have just achieved an incredible milestone. For which the rest of the world needs to have more respect for the United States than it sometimes does.

So, a black man is president and suddenly, mysteriously white privilege has disappeared. Oh Yeah, I've always wanted to live in a world where store security didn't follow me around waiting for me to steal.  Perhaps when I take some classes to upgrade my education, this time around the so-called liberal white professors will not feel the need to speak about my culture as though they know more about it than I do.  I can finally put to rest the anger I had when people asked me if I was my sons nanny because when he was born he was really light skinned. WOW I am feeling warm and fuzzy.

What Bennett would like is for Barack to rule as a figure head much the same as the Queen England.  In his mind Barack can occupy the white house, give the occasional speech; but he should not attempt to change any of the systemic inequalities because hey, black people have it good.

Why should society continue to progress when white people have it so good already?  They already control all of the major expressions of power in western society, and since that can hardly be improved upon without returning blacks to slavery, all is right with the world.

For Bennett, Obama proves that meritocracy is possible, when in reality nothing could be further from the truth. Whiteness has always allowed a few exceptional Negroes to prevail so that they can point to that person as evidence of fairness, in a system that is clearly biased.  For every Oprah, or Obama how many blacks are living in ghettos struggling with an education system that daily fails them? How many are working twice as hard as whites to achieve a minimum standard of living?

Masa Bennett has it all figured out though.  The problem is not racism, it is the way that ignorant blacks act. If we could just learn to control our savage ways we could all be the next Obama.  With all of the time spent watching the ignorant shucking and jiving of the black people whites love to promote, why have we not all internalized the message that a smile and a healthy shuffle, is the best way to advance in this world? We shouldn't display anger because good domesticated animals accept their lot in life.  A dog that knows he is mans best friend doesn't bite the hand that feeds it.

I am so glad that Bennett can feel that his racism has been redeemed by the election of Barack Obama.  Black babies all over the US can breathe easy because now that Bennett has decided that we are all equal, he can abandon his plans to have all black babies aborted.

According to Media Matters Bennett said, "you wanted to reduce crime ... if that were your sole purpose, you could abort every black baby in this country, and your crime rate would go down." Bennett conceded that aborting all African-American babies "would be an impossible, ridiculous, and morally reprehensible thing to do," then added again, "but the crime rate would go down."

On the night when the first African American man was elected president this was the man that CNN saw fit to invite to share commentary.  There is nothing like a watching a man who engages in racism declare it dead.  Dear Bill Benett I think your whiteness is showing just a touch.  I wonder if in celebration of this historic victory he washed his own white sheets to prove how liberated his kind of thinking really is.  Oh the joy of living in a brand new era were we  have transcended racism.

Thanks Mattbastard for help with the links.

This shit is used against every marginalised group. Hold up the one woman/POC/gay/disabled/older person who has 'made it', then imply that if you haven't made it too, that's down to some personal moral failure on your part. There is something wrong with you as an individual, not with the system in which you live. It's just another way of dividing and denying people, and should be greeted with the big raspberry it deserves.

"For which the rest of the world needs to have more respect for the United States than it sometimes does..."

His Western privilege and arrogance is showing just a touch too.

I was watching Morning Joe yesterday and people actually listened to Tavis Smiley when he popped in with "One person does not a ceiling shatter." The conservatives on that show gave Smiley's comments real consideration. But McCain's concession speech wasn't so generous as he slipped into the bootstrapping meme:
"I've always believed that America offers opportunities to all who have the industry and will to seize it. . . ."
Not to minimize what Obama has accomplished, but industry and will? Princeton Study, anyone? If having gone to college as a black person doesn't trump being a high school educated white convict in a New York City job market, industry and will are only going to go so far for most people.

Also, on a related note, a really misguided friend sent me this article: http://www.reason.com/news/show/126944.html
My friend insists I'm misreading it, but I think it's probably one of the more offensive articles I've seen on the subject.

@Jillian that last paragraph of the article you referenced made me ill. It was beyond offensive. Some people refuse to see the privilege in assuming that racism is over just because they have a HNIC for four years. One man does not bring an end to racism, the problem is far to complex for that. When you have people on election day saying that they are voting for the nigger it speaks to exactly how far we still have to go.

Wow! Shit! I guess we can pack up and go home now, right?

What the fuck am I going to do w/ all of my new found fee time, now that I don't have to worry about civil justice and equal rights anymore?

Guess we can just go back to the kitchen...

His abortion comment isn't racist. He's countering a pro-life claim that if we didn't have abortions, we wouldn't have social security insolvency, and he's showing the absurdity of such an argument by applying the same reasoning in another direction to show that if you focus on one specific end to the exclusion of all else, ridiculous options suddenly look like solutions. In context, the argument only makes sense if one assumes that both he and the listener would be completely opposed to that proposal, so calling a rhetorical device a plan of his to abort all black babies is just poor reading comprehension.

@AR if he meant it not to be a racist comment he would have applied it broadly, instead he chose to focus on the black community.

How could he have applied it broadly? The example used needs to be a group that is known to have a disproportionately high crime rate for the proposal to be both abhorrent and effective-in-principle, if it is to have the effect of countering the "ends justify the means" point of the the pro-life SS advocate, so no matter what group he selected, it would have to be a marginalized one.

Yeah, AR is, like, sooo right--appropriating the lives of an entire ethnic demographic to prove a point=totally not racist.

I'm sure some of Billy-boys best friends are...well, you know.

BTW, AR, thanks for showing that 'racial solidarity' apparently does swing both ways.

I was going to say that referencing a statistic isn't appropriating lives, but then I realized that I don't even know what, if anything, that actually means.

BTW, AR, thanks for showing that 'racial solidarity' apparently does swing both ways.

I can't imagine anyone seriously arguing otherwise, but in any case, I'm only as white as Obama. What makes you think otherwise?