Michelle and The Dress 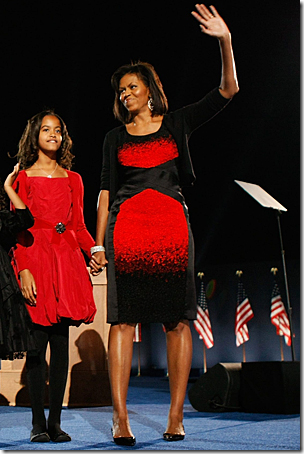 Originally I had no intention about blogging this because I considered it a non issue.  It seems however some people cannot stop discussing Michelle Obama's dress on election day.  It was with complete disgust that I watched a segment on CNN admonishing Michelle for her  dress, and reminding her that she is dressing for a nation.  Now even the clothing that black women choose are aggressive. For heavens sake.

Michelle Obama is an ivy league educated lawyer. She is  an accomplished woman.  and people are focusing on her dress.  This is social disciplining at work.  No one had anything to say about Baracks, suit, tie, or even if the man wears boxers or briefs.  His wife somehow is dressing for the world.

Perhaps people would have been happier if she went on a 150 thousand dollar shopping spree at Neiman Marcus, thus proving to the world that she can consume like any other westerner.  After all, if you are going to be a part of the elite class in society, to not purchase items that indicate status is a real sin.  Those third world workers need to be making her clothes for everyone to accept that Michelle has made it to the big time.

I am tired of Michelle routinely being reduced and attacked by the media.  She is not some sort of accessory to Barack,  or a black barbie you can play dress up with, she is a woman in her own right.

If Michelle chose to go to salvation army and purchase a closet full of clothing from there it should not matter.  What should matter is the content of her character.  When it comes to men we focus on power and their ability to attain it and negotiate it; but with women it is all about how pretty they can dress up, as though we are not thinking individuals.  Michelle deserves better than that and so does every single woman.

The next time you read or watch commentary on what Michelle is wearing stop and think about how this reflects on all women.  Ask yourself why the dress is so important.  Are we valued for our appearance and our ability to consume, or our accomplishments?  If you like I determine that appearance seems most important then as women  we must engage in battle to assure that we are not reduced in this way.  The fashion plate woman serves patriarchy in that it ensures that we are not taken seriously.

If appearance is a focal point then the valid issues we raise will be soundly ignored to debate whether or not we are pretty enough.  Women have much to contribute to society, and our ability to evolve is severely limited because we silence one half of humanity.  Not every good idea has a penis attached to it.

"Now even the clothing that black women choose are aggressive."

I agree that this is sexist and demeaning.

But let's be fair: this isn't about Michelle Obama being black. Much of the scrutiny she received during the campaign *was* related to her race, particularly the focus on whether or not she could meet the standards of white women, in fashion and otherwise.

The wife of the president, however, always receives this sort of fashion scrutiny, and any perceived mistakes are criticized in the same way. Hillary Clinton, for instance, was intensely examined for wardrobe, hair, makeup, and so on (and was criticized mercilessly for being an Ivy League-educated lawyer, for that matter).

You obviously get that this is largely about being a woman. I'm just making the point that in this case, I don't think race is a factor.

"Not every good idea has a penis attached to it."

This is beyond ridiculous. I don't even WANT to know what those idiots at CNN said. And yes, all women get terrible scrutiny and face lookism at a far higher rate than men do, especially WOC. Aggressive? You have got to be fucking kidding me. I couldn't believe you can actually have a racist take on a woman's dress, but thanks, CNN, for proving me wrong.

I, for one, think red and black on her and the kids were a sensational combination, but so what if it wasn't?

The other thing I love about our new First Lady (and I love her much more than her husband) is that she is a fit, but ample woman, and not sickly thin like Nancy Reagan or Cindy McCain. I know that this is seemingly inconsequential, but I am waiting for the first assaholic in our fascist fashion media to bring it up. Anyone want to take bets on this?

I agree that this is about sexism but I do think that it partly has to do with race also.

For example, on another blog someone commented that because she has "curves", she should have covered them up by wearing a suit. Many (although not all) black women are fuller around the hip and butt area - if that is her natural figure, why should she cover it up? When famous white women show their curves the media applauds and celebrates them.
I also found that a lot of black women were criticizing her appearance that night. I just felt that in this pre-occupation with her image they wanted to send a message to her from early: "Your job is to shut up and just look good at all times next to your husband. Because many of us have become sensitive to the stereotype that black women like to talk too much and dominate their male partners.

Incidentally, the dress apparently was from Narcissco Rodriquez' 2009 runway collection.

In addition to all of the excellent and decidedly non-trivial commentary offered on this post and in these comments, let me add my own extraordinarily trivial and totally irrelevant comment:

I really liked the dress.

So I guess I'm saying:

1.) I can't believe people are talking about her dress! And, in addition to that,

2.) Exactly what's wrong with her dress, anyway? I think it looks good.

Thanks, Nia. I didn't see that posting about her curves (although we white women with curves and less than a size 5 bodies also take a lot of shit, too - I see much more approbation than applause for us, to, but your point about her body also being racialized by our fascist fashionistas/os is well taken).

Also, that "job" you described has been generally applied to all our first ladies (Americans are particularly reactionary when it comes to the role of first lady), but will be laid on Mrs. Obama a zillion times more than any other first lady, due to the color of her skin. Fasten your seat belts...

Still, you won the bet!

Yes Anonymous you are correct. ALL women get taken to task if their bodies don't fit the constructed standard.

I actually thought the color and fit was extremely right for her. Her and the children matched which as a mommy I think is way cool (is that passe to say that?) when mom and kiddoes match. But you are all right - all First Ladies get criticized for one reason or another and Michelle will be triply criticized, which I feel is unfair. I think she will be good for everyone as I feel she will be involved more so than any other First Lady to date on important issues. This was one decideing factor in my vote - shucks I didn't even know and could not remember even hearing McCain's wife's name - ever.

I can't even begin to fathom why what she wears needs deconstructing, let alone to determine that she's one of those scary angry black ladies. It's so sick that women are treated that way.

I think, however, that Michelle Obama is stunning, and her kids are ultra-cute.

I agree with you that it's ridiculous to make criticisms about her dress. It was appropriate to say the very least. Clothing is subjective, you can't please everyone. That being said, I think it is very clear where the criticisms come from.

Everything else aside, I think the dress was beautiful.

What was wrong with my post that it needed to be removed? It pointed out that the actual words of the commentator had nothing to do with race and everything to do with the sexist and silly world of fashion.

It pointed out that it was you Renee that projected racism into this, and conjectured it may be due to your own racist beliefs.

Also, I think your MRA apology rings hollow. In that thread I point to some sources to help you understand what makes for a real apology, and provide you some ideas on how you can take your semi-apology and make it real.

As soon as I saw her dress I:
1. loved it
2. knew that lots of people would think it was reaaaal craaaaazy-like.
I think fashion is, or, can be, fun, and she's a public figure wearing clothes that millions of people see. In that sense I think that discussion of first lady fashion is justified. I however agree that focussing on it in the mainstream media to the point of doing a whole segment on it is just wierd. They like to pad out their daily broadcasts with fluff, I guess. Hey, let's keep it light-hearted, yeah!!! And then we won't have to work as hard on reporting about important stuff. I also think that the sexism of focussing on only the wife's clothes in such a way is really taken for granted. In a sense it's like she is no longer the owner of her own image/presentation. The American people own it, somehow. Or at least, that's the attitude.
Did anyone else notice that when they show the side-by-side image of Michelle and a random model wearing a similar dress, the image of Michelle appears to be squished vertically, making her appear "stumpier," in fashion-speak? I wonder if that would be on purpose, or just plain laziness.

But then, I don't give a damn what anyone wears. I think the way we take off on people over dress is ridiculous.

Don't get me wrong, I think it was an ugly dress. (When she came out I said "Wait, is she pregnant?") But on the other hand: WHO CARES??

If no one else had brought it up, I would have only commented on her dress that first and only time. In the scheme of how monumental that night was...we're going to discuss her dress? Really?

But also, please stop torturing yourself by watching CNN. 24 hour news networks are BAD for people and for society. When you go through all the important news, realize there's nothing left and still have 20 hours to fill, you start making shit up and talking about nothing.