According To HuffPo Michelle Obama Is A Gal

When you make your living through the written word, one would assume that you would have a respect for language and an understanding of how important words are.  It seems for HuffPo that the meaning that language conveys about a person is completely unimportant. 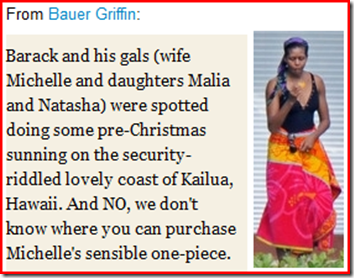 It's easy for an organization like HuffPo to engage in this kind of behaviour, because few will bother to call them on it.  People today seem to feel that racism is solved because someone will more than likely be called out for saying the word nigger, burning a cross, or wearing a white sheet in public.  This allows them to ignore the smaller coded messages that daily infer that people of colour are less than.

Referring to Michelle as Baracks gal, further infers that she is not his equal.  Since they had already decided to demean the woman by calling her gal, I guess it was an easy slam dunk to bring patriarchy into the fold and push male headship.

It seems like such a simple statement doesn't it, "Barack and his gals,"? There is so much history behind those words, that they cannot and should not be dismissed.  Recently I have heard a lot of backlash about PC speech.  It seems to me that the real problem is that people do not want to think about the ways in which language is often offensive to others.  They want the right to minimize and "other" certain segments of society to maintain their privilege.

Some have become so accustomed to verbalizing their biases and privilege that any call to reconsider what is acceptable is seen as infringement.  The idea that they do not matter any more than someone who is of colour, transgender, disabled, etc., is astonishing.  No one should exist with the right to demean someone to maintain their unearned privilege.

Well Huffpo, this is  a fail.  I am sorry to be the one to have to inform you.  Michelle Obama deserves more than this.  I know that your aim is to get more pageviews and maintain your number one rank, but is it necessary to be so inconsiderate and thoughtless regarding the language that you use?  Blogging is a brand new medium and you have a great opportunity to set a new standard. How about you not blow it, and really think about what you are choosing to put on the web.