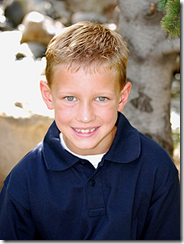 Well it seems it is never to early to start acting on your male privilege.  Nine year old Alec Grevin has written a book entitled , "How to Talk to Girls" It is pitched by the publishers as dating advice for the young by the young.

With those beautiful blue eyes, and devilish grin he appears charming and engaging.  It is not until you learn what he has marketed as dating advice is straight out of the MRA manual on how to devalue women that your stomach begins to knot.

According to the New York post, the fourth-grader from Castle Rock, Colo., advises Lothario wannabes to stop showing off, go easy on the compliments to avoid looking desperate - and be wary of "pretty girls."

"It is easy to spot pretty girls because they have big earrings, fancy dresses and all the jewelry," he writes in Chapter Three.

"Pretty girls are like cars that need a lot of oil."

He advises, "The best choice for most boys is a regular girl. Remember, some pretty girls are coldhearted when it comes to boys. Don't let them get to you."

That's right the man cub has spoken.  Make sure you get yourself an ugly girl that you can control.  The pretty ones will use their looks to control your behaviour.

Even this 9 year old budding sexist knows that socially we have decided that all power should be in the hands of men.  He has already claimed his unearned male privilege, and to make matters worse by publishing his words we have taught him that it is acceptable to take this approach to women.

Grevin may have been raised to believe that, “Girls win most of the arguments and have most of the power.” but as women who must struggle daily to avoid being beaten, raped, economically disenfranchised, sexually discriminated against and silenced the truth is that power lies firmly ensconced in male hands.

I cannot help but to look at him and think that his parents let him down.  As a feminist mother each day I struggle to ensure that Mayhem and Destruction are aware of their unearned male privilege.  Teaching male children that masculinity can be valued without diminishing feminity is a daily struggle.  Socially boys are encouraged to be adventurous, and dominant.  It is quite a radical act to encourage them to express all aspects of their personality.

My home is a safe space, precisely because Mayhem and Destruction can, garden, cook cry, sing or dance as they see fit.  Whatever they choose to embrace we support because we realize that the attachment to hyper masculinity is ultimately damaging.

Of course the MRA would like us all to believe that there are essentialist traits that are inherent to each sex, but in fact it is the way that we raise children that causes these traits to become socially ingrained.  This little boy is clearly been taught to preserve his male privilege at all costs.  It saddens me to know that this little guide on how to be a sexist is a success.

What have we taught the young but the false lie that patriarchy does not exist, and that the source of woman's power is her ability to attract dick. As adults by celebrating this nonsense we have only ensured the marginalization of yet another generation of women.