Boys Can Be Feminist Too 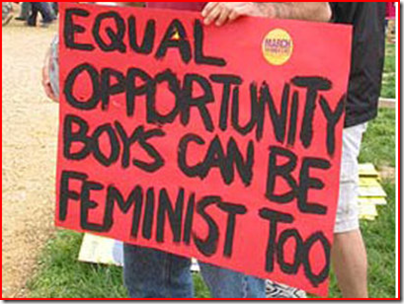 A few weeks ago my darling toilet plugging little boy Mayhem turned three.  As I looked at the little guy that has replaced my 4 pound bundle of joy, I felt happiness for the wonderful little boy that he is turning into, and sadness that it is all happening so fast.  Each year on their birthday one of the things that I do is review the list of promises I made to them the day that they were born.

As a parent I realize that no matter what I teach my children in the end it will be their decision what they chose to walk away with; I can only provide a possible path for them to follow.  Having only two brothers and no sisters, I always thought that I would be the mother of girls.  It seems that my life is destined to be surrounded by men.  Before becoming a mother I thought about the books I would read to my daughter, the toys I would buy them, and the stories that we share.

When I found out that I was having a boy I was initially disappointed.  What was I going to do with a boy I thought.  I have big feminist ambitions and for that I need a girl I thought.    As my son grew I realized first hand that sexism isn't only an issue of women, it is an issue for everyone.  I watched as despite my idea of gender neutral parenting the world was determined to teach my little guy that all boys like cars and girls play with my little ponies.  I looked at him dumbfounded the first time he used the feminine in a pejorative manner.

What I have learned from becoming a mother is exactly how insidious patriarchy is.  Silently like a snake it slithers into your home and kisses your children while they sleep.  It whispers foul messages in their ear, granting some privilege and forever sentencing some to a lifetime of marginalization.

Watching as others tried to model a negative masculinity for my sons I slowly came to realize that feminist parenting of male children is a radical act, in fact I believe that it qualifies as macro activism and not micro activism.  The unenlightened tease me, and tell me I am making them wimpy for the sake of my future daughter in-laws (heterosexist assumptions) but in truth, I know that I am giving them a rare gift.

Mayhem and Destruction are growing in a home in which gender does not necessarily match certain jobs, ability, talent, and worth.  Never are they given a moment where they can assume that because they are male, that they deserve certain rights and freedoms that a little girl of their age would not get.  I demand respect not only as their mother but as the woman of the household.  My thoughts, feelings, ideas, and achievements matter.

As time goes on it occurs to me that other than lobbying for our rights to the government, the next best possible avenue is to raise feminist sons.  Within our very wombs we hold the keys to making the world better for the next generation of women that come after us.  When we think of activism most believe that it involves protesting, writing letters to senators, boycotting products etc., but what if we thought about activism as something that we live daily rather than something we react to.  What if as women, and  as mothers we decide to become active rather than docile bodies?

Feminism is not something that we should walk away from when we leave a womans studies classroom.  It lives outside of academia, we simply have to find a way to apply it to our lives other than getting together for monthly bookclubs and the occasional consciousness raising night. Feminism can be in every breathe we breathe and in every action we take.  It is feminist when we decide that our sons should play with their Tonka trucks and a kitchen set.  It is a feminist act to teach our sons how to cook instead of deciding it is a skill he does not need because he will have a wife to care for him.  It is a feminist act to encourage our sons to display a myriad of emotions, not only to dispel the notion of a thick upper lip masculinity, but to ensure that they are whole beings.

Just in the ways we choose to parent we can reshape the world.  Each child is the promise of a better world.  When they are born and they look at us with those sweet newborn eyes, to them we are the world; and therefore we have a responsibility to model the world we want them to inherit rather than the world as it is.

I intend to raise feminist sons.  When my beautiful boys become men, I want to be secure in the knowledge that not only do I love them because they are my sons; but that I like them as men and for that to happen they must be feminist men.