Gay Is The New Black 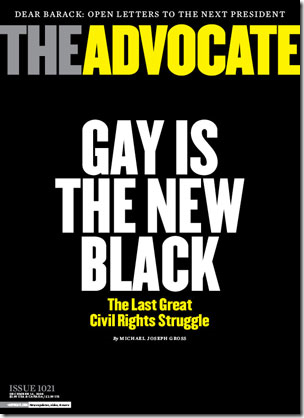 Of course I am delusional right...somehow their oppression gives them the right to "other" blacks.  I have come to the realization that the fault is entirely my own. You see somewhere along the line I had assumed that as a person of colour the degree to which racism effected my life was a serious matter, but apparently it works better as a slogan to fight the oppression of others.

Gay Is The New Black: The Last Great Civil Rights Struggle: I wonder if they bothered to inform Indigenous Peoples that their struggle was over.  How about women; we can happily declare that there is no reason for feminism because certain members of the gay community have announced their struggle to be the last one.   How about the disabled, has society stopped practicing abelism? MMM ageism and fatphobia anyone?

This speaks exactly to the point I was attempting to make regarding playing the "it's just like Rosa Parks card."  Even though the gay community is made up of people of different ethnicities, races, cultures, and class backgrounds, it's public face is pure over privileged white male. Right after the passing of prop 8 all over the news the white male gay leaders came out in force to verbally protest.

On one hand it was the blame the blacks meme for the passing of this horrible legislation, and on the other it was why can't you understand we're just like them. Just like them - except that there are POC who happen to be gay...hello McFly. In one fell swoop they erased the lives of  POC that are gay as well as insulted every single POC who has worked staunchly as an ally to secure gay rights.

POC are "a them" to the people that are running the gay rights movement. As much as they demand that we recognize their humanity, apparently it is quite acceptable to play the privilege card and deny our humanity at every fucking turn.  You know what, I am sick of it and I am angry.

From the minute I started vocalizing about the ways in which some members of the community were more than willing to stand on the neck of POC to get their rights, I have faced nothing but resistance.  Privilege can always find some excuse to justify maintaining  the racial hierarchy. But there are similarities has been the excuse... Yet when you try and discuss the supposed similarities you are homophobic.

I have been called homophobic more in the last month than I ever have in my life.  All of a sudden, all of the effort that I have put into being active in the community (in real life), and being an online advocate count for nothing because some people want the right to claim a narrative that does not belong to them.  I am supposed to shrivel up in shame now that I have been labelled a homophobe. It is meant to silence me into acquiescing to this down right racist assault on my people.

Suddenly everything that I say is wrong. I am not allowed to question.  I must openly say that yes master your struggle is all that counts, this uppity Negro is out of place.  I am blinded by heterosexual privilege and that is why I cannot see the error of my ways.  Any excuse that can be clawed together to silence POC is employed.

This racist appropriation of the civil right struggle will continue to be used because white people feel that the best way to achieve sympathy is to point out that they are being treated like blacks.  Wow isn't that an upset to the natural order of things---everyone knows white people are too good to be treated like niggers. Three fucking cheers, way to be an ally.