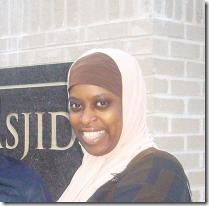 The Hijab is not a simple garment.  It is complicated not only by its meaning, but the ways in which it is perceived across cultures.  Many westerners approach it from a position of xenophobia and attach their hatred and fear of those that they have "othered" for gain to this garment.  Lisa Valentine, also known by her Islamic name, Miedah, was to learn this when she accompanied her nephew to deal with a traffic issue.  She was ordered to remove her hijab.

Her husband Hall said Valentine, an insurance underwriter, told the bailiff that she had been in courtrooms before with a scarf on; that removing it would be a religious violation. She became frustrated, then turned to leave and uttered an expletive, Hall said.

That’s when the bailiff handcuffed her and took her to the judge’s chambers, Hall said.

She was sentenced to 10 days in jail by Judge Keith Rollins.  Valentine is not the only woman to undergo such treatment by judge Rollins. Sabreen Abdul Rahman was removed from court when she refused to remove her hijab.

“I can’t. I’m Muslim,” she mouthed silently to the bailiff, who then removed her from the courtroom, Rahman said.

“This is a religious right,” she said. “This is unconstitutional. And humiliating.”

It seems that the women were removed because wearing a hijab violates a court policy of no headgear, according to Chris Womack, deputy chief of operations for the Douglasville Police Department.  This law as applied is racist and sexist. I find it ironic that we are not hearing complaints about men wearing yarmulkes or turbans.  Surely they count as head coverings in the same way that a hijab would.  This is not about safety, this is about expressing power over women and using their religious observance to manifest xenophobia.

If this law were to be followed, no practicing Muslim woman would be allowed to enter any courtroom; thus making this laws application discriminatory.  But this comes as no surprise as it was the intent from the beginning to be discriminatory.

Western men have continually expressed a desire to decloak women that wear the hijab.  Their desire is to possess them, foul them, and disturb them from their path.  They reach with hands outstretched not in friendship, but as colonial conquerors from a bygone age.  They have mystified the hijab and refuse to honour it as a religious symbol; instead they view it as a barrier that keeps a distance from that which they feel they have the right to - woman.

Let's be clear in what occurred.  A judge penalized two women for failing to disrobe at his pleasure.  Would he have felt compelled to demand the same sort of subservience from men; the same form of nakedness before the world?  Would he have felt similarly compelled if another religion were involved?  The current rate of Islamophobia in the US, causes me to believe he would not have been this strict with another culture, or another religion.

The attacks that Obama withstood in his campaign even after declaring himself a  Christian because people linked him with Islam reveal only a small sample of the ignorance many feel a right to display.  Just this fall someone threw a bomb into a mosque where children were gathered.  Women in hijabs have been banned from sporting competitions, accused of indoctrinating children in an educational setting, and they have been denied jobs.

Muslims are always constructed as being from somewhere else.   Without ever having read the Qu' uran many Americans declare it a violent religion, ignoring the crimes committed by different faiths across the world. Proudly they declare the US a Christian country; forgetting the many times American leaders invoked God as they committed crimes.

Even as Sabreen Abdul Rahman spoke of the violation of her rights what she failed to see, is that no matter what the law says it will always conform itself to those in power.  The current climate in the US is islamophobic; and therefore as an expression of power she was jailed.  It is the very visibility of the hijab that  made her a target.  The fact that she dared speak for herself and demand respect further exacerbated the situation.  Patriarchy wants conformity from all women, but demands it from some.

What occurred was the perfect intersection of race and gender.  From his position of privilege it is doubtful that judge Keith Rollins recognized how oppressive his ruling was, or the impetus behind it.  This was no simple or arbitrary decision, it was an action in maintenance of the current power structure.