Obama received secret service protection before any other candidate in the past presidential election.  Though we do not like to discuss it, Barack has faced a barrage of threats.  This in part is due to the colour of skin, and the fear that whiteness is devalued by having a black male as the leader of the US.

In a country in which leaders have been assassinated, JFK, RFK, MLK, the fear of someone unilaterally deciding that change terrifies them enough to commit murder is very real.  We are resistant to talk about it because this is not a celebratory event.  It is our unspoken fear.  To make matters worse there are those that once again seek to capitalize from the unspoken. 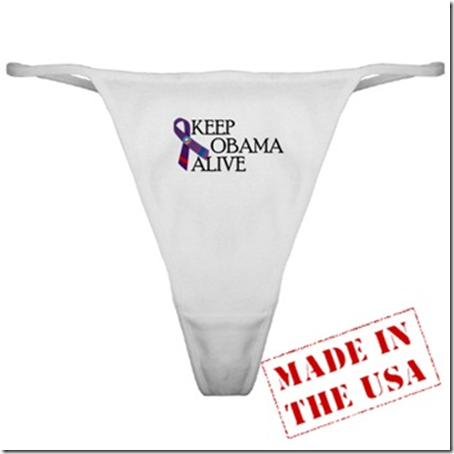 For a mere 12.99 you can express your fears.  What better way to do that than to wear it on your crotch?  Is there nothing more beautiful than a patriotic snatch?  Red, White and Blue anyone?

Why is it that everything comes down to purchasing something?  If you want to show your admiration, respect and concern for Barack it seems purchasing something you don't need, is over priced and unbelievably tacky is the way to  show your "patriotism" and presidential support.  Will presidential toilet paper be next to wipe up after all of the shit that is being pitched?