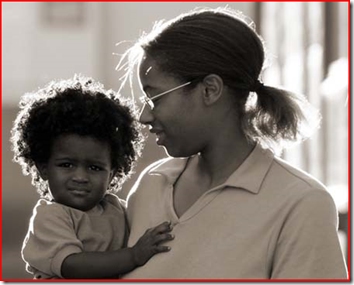 Latina gave birth to her first child on the day that she graduated from high school.  Against doctors order she got up and walked across the stage to collect her diploma.  That speaks of young woman who refused to be beaten or deterred from her dreams.

Life for a single mother is incredibly difficult.  The pro life movement encourages women to have their children but does precious little to help them raise their kids.  They don't think about the midnight feedings, potty training, diapers, sleepless nights, daycare issues, expense and poverty

Even in a two parent household raising a child is a daunting task.  There is no such thing as a day off and society is always available to tell you of the various ways that you are failing your children.  We claim to care about children but we routinely fail them by failing to provide accurate support for their mothers.  If a woman is poor, so are her children and this can lead to serious issues in childhood that will last a lifetime. 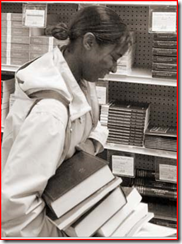 Latina is a mother of three children with three different fathers.  Only the father of her most recent child is playing an active role.  She has been living with her 57 year old mother while attending law school.   Often studying with children hanging off of her, Latina refused to give up. Of the 1,175 of the Wichita Bar Association only eight are African American and today Latina is a member.

She is all set to move into a house for which she helped build through Habitat for Humanity and is now earning 45,000.  Hers is a story of the triumph of will and determination. Time and time again she found the strength to get out of bed and continue on even as the world was beating her down.

While I am truly inspired by her story, it reminds me of just how difficult we make it for single mothers to succeed.  They are treated as though they are a drain on society.  Clearly Latina had the ambition and strength of will to pursue this difficult goal while raising three kids, but could we not have made this task a little easier for her?

Imagine if we had invested in Latina instead of making every single day a struggle.  Even know she labours with 100,000 dollars worth of debt, and the profession that she has chosen to enter is not very woman friendly, never mind making adjustments for motherhood.

Most women need to work and when they are single mothers the struggle to get ahead and eek out more than a marginal existence can literally swallow you alive.  If we are going to reduce access to birth control and abortion we must realize that without any accommodations we are sentencing not only the mother, but her children to a lifetime of poverty.

While stories like Latinas are wonderful and heartwarming, they are hardly the norm.  There is a tendency to want to point to women like her and say see you an do it too, but the reality is that not every woman can.  If this were the case single mothers would all be in professional occupations rather than constituting the poorest members of society.

Poverty is  largely a feminized state because we refuse to acknowledge the reproductive labour of women and offer them solid opportunities for advancement.  If we want to support life we need to start to understand that life means from birth to death, and not just the nine months in the womb.