Pink and Badass: The Gulabi Gang 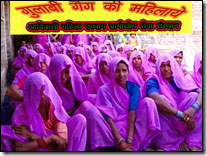 In India pink no longer stands for a weak symbol of femininity.  The women of the Gulabi Gang are donning pink saris and demanding respect. In the face of police corruption, and violence they are showing extreme courage and strength.

According to the BBC, two years after they gave themselves a name and an attire, the women in pink have thrashed men who have abandoned or beaten their wives and unearthed corruption in the distribution of grain to the poor.

They have also stormed a police station and attacked a policeman after they took in an untouchable man and refused to register a case.

"Nobody comes to our help in these parts. The officials and the police are corrupt and anti-poor. So sometimes we have to take the law in our hands. At other times, we prefer to shame the wrongdoers," says Sampat Pal Devi, between teaching a "gang" member on how to use a lathi (traditional Indian stick) in self defense.

After generations of abuse, women are taking the law into their own hands.  While this may seem like it is in support of anarchy, what we must consider are the living conditions under which they have been forced to survive.

I believe that this is a movement that needs to be celebrated.  We have to often  licked our wounds and dreamed of a better day.  For these women the better day is today.  If this is what it takes for men to recognize that their violence, and their oppressive acts are damaging, then this is what it takes.  I will not sit in judgement of their methods.  If a public beating, or shaming of a male  stops his routine abuse of his wife, or daughter in a country where women are so devalued that they die under the worst conditions then so be it.

There is no oppressor in history that has willingly given up their power to a weaker party; and therefore it is ridiculous for us to expect patriarchy to turn its back on the power that comes with male privilege.  Women have a right to have a life free of violence.  We have a right to respect and if it will not be granted, then we have to take it.  If men will not take responsibility for their actions then they must be forced to.

After learning about these women it gives a new understanding of pink as something soft and feminine.  Here's to all the badass warriors in us all.

You know, the last two sentences were supposed to be the end of this post until this thought occurred to me.  As feminists those viewing this post are probably excited seeing such strength in women; however I feel that part of the thrill of this story comes from our western construction of so-called third world women as victims.

Women of the global south have always been active in the fight to secure their rights, and it is only from a biased western perspective that these efforts have been overlooked in the effort to paint the west as enlightened.  When we consider the  Gulabi Gang we should look beyond patriarchy and keep in mind that this is also a message to western feminists not to discount third world women.  When we construct them as lifeless beings without agency, to take a position of moral authority we are just as guilty of subjugation as patriarchy.