As you know I am a cannuck, and therefore at some point  I must post a hockey related item.  Sean Avery is known for his mouth.  His goal is to piss off and distract the opposing team.  Today he used sexism and officially went one step too far.

"I'm really happy to be back in Calgary; I love Canada," he said. "I just want to comment on how it's become like a common thing in the NHL for guys to fall in love with my sloppy seconds. I don't know what that's about, but enjoy the game tonight."

This commentary was aimed at Dion Phaneuf, who happens to be dating Avery's ex girlfriend Elisha Cuthbert of the television show "24".   Isn't this just classic woman hating bullshit. Avery decides to lash out a man but of course the best way to do it is to insult his girlfriend.

"I like to push it to the edge, no doubt about it," Avery said this summer, according to ESPN. "That's how I play. That's how I live. That's what I'm all about."

In a move quite unexpected to me, both the team and the league denounced Averys commentary. 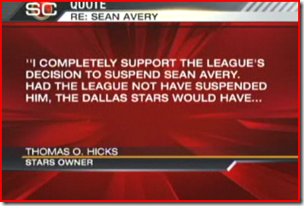 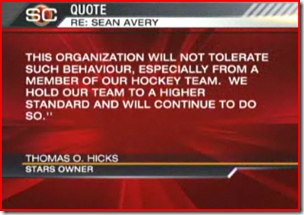 Despite what can only be describe as a great move on the part of the NHL, many are complaining that this should not be an issue that warrants a suspension.  On a hockey forum that the unhusband visits, the sexism and misogyny in an attempt to keep their favourite guy on the ice is disgusting.

Yes asshat the best way to play the game is to demean women by referring to them as sloppy seconds.  In his little mind slut shaming and hockey go hand in hand.  Was Cuthbert to get herself to the nunnery after the two of you split up? How is it that she is considered used goods, and this piece of work is just another hot cock out for a walk?

Why isn't he considered used goods for engaging in sexual activity?  Virginity and chastity are something that he clearly does not think highly of because he does not practice either   unless..ummm let me think, oh yeah that's right women are worthless unless we are pure.  This is right out of  Valenti's,  He's a Stud She's a Slut.  In Avery's world anyone with testicles gets to be as sexually liberated as they want without any form of repercussion; wheres women are to be publicly shamed for the exact same behaviour.

Doesn't the issue of sloppy seconds just bring to mind a vile vision?  Why are there no equal terms that are applicable to men?  They certainly are never referred to as sloppy no matter how many sexual partners they have. We don't even have a term that is separately aimed at men for promiscuity, slut and whore are associated with femininity.

When we discipline male sexuality it is because of a failure to perform.  Calling someone a limp dick is enough to rile any man because male sexuality is about the ability and the quality of performance.  As a male ages his masculinity is questioned should he chose abstinence, while a girl is encouraged to save herself for marriage.  Her value is closely associated to her purity. What Averys comment did is reaffirm the idea  of male sexual freedom and the prison of socially enforced chastity for women.

Not only am I completely disgusted by Averys commentary, but at those who  who have stood on their head to defend it.  Yes he had a right to his freedom of speech but we socially have a right to fine that speech if we find it offensive.   Well Avery it is my hope that each and every time you decide to be an asshat the NHL will remind you that there is a penalty to pay. Decent human beings with a modicum of class do not demean another based in gender.