Abortion, Femicide And Somewhere In Between Women's Rights

Most cisgendered heterosexual women at some point must make choices regarding reproduction that have very real effects on their lives.  Feminist have argued that that not only do women need access to birth control, we need access to safe abortions.  It is a well known fact that outlawing abortion does not mean women will not stop having them;  furthermore when access to abortion is reduced, or denied women will take drastic measures that often times end in illness and many cases death.  What most pro-choice people fail to realize is that by not allowing women to choose, two lives are needlessly put at risk instead of one.

This desire to ensure that women have access to safe abortions is now coming to conflict with femicide.  In many nations boys are the preferred child and when some women discover they are having a daughter they abort the fetus.  "In countries where sex-selective abortion occurs regularly, 108 boys or more are born for every 100 girls (without human interference, 104-107 boys are typically born for every 100 girls. Estimates vary but several countries in East and South Asia (China, South Korea, Taiwan, India)have a birth sex ratio of 108 or more.

According to Bela Ganatra Son preference is strong in all of the Asian
countries where sex ratio elevations have been seen. Patrilineal inheritance and kinship as well as patrilocality make boys more valuable to the natal family. Farm-dependent economies require male workers and in the absence of state-sponsored schemes, sons take responsibility for ensuring old age security for their parents. In south Asia, the dowry system adds to the economic disadvantage of girls. Religious traditions (sons perform death rites in Hindu tradition and ancestor worship in the Confucian tradition) also encourage son preference.

The ultrasound which is a necessary tool to discover the health of the child is being employed as a tool of sex selective pregnancy. This has caused a restriction in access to abortion after the 12 week period.  Not all women are aware that they are pregnant at this point and those seeking an abortion are restricted on the basis that they are seeking a sex selective abortion. 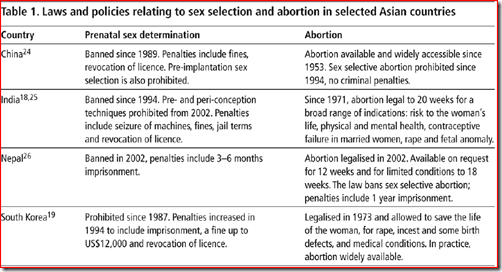 Even in cases where the abortion is allowed beyond the 12 week period the system can only rely on the integrity of health professionals to ensure that the decision to abort is not based on the sex of the fetus.  According to Ganatra, this has lead to the creation of "mobile clinics" manned by pharmacy assistants and local practitioners offering ultrasound services for the sake sex detection to the masses.

The solution is not as simple as outlawing ultrasounds, banning abortions, or outlawing these so-called clinics.  Even in cases where the technology has not been available to ascertain the sex of the child, it is not uncommon to find female children abandoned or murdered upon birth.  The desire to eliminate sex selected abortion in some cases has been used as justification to outlaw all abortion, on the grounds that it is never possible to ensure the true intentions of the mother.

The Catholic family and Human Rights  Institute claims that there are  are as many as 100 million missing baby girls because of sex-selected abortion. Clearly gendercide must end.  The growing imbalance in the male to female ratio, indicates that boys are still valued over girls.   These babies are dying before they even have the chance to live simply for having the misfortune of being created in a society that has deemed women a burden, or unnecessary to maintenance of a healthy and functioning society.

I will never say that gendercide is an appropriate reaction to the patriarchal desire to privilege masculinity.  The solution to this issue cannot be the reduction of access to abortion because it only confirms the belief that women are of no value.  How can we produce an equal society if certain members are not able to have complete autonomy over their physical beings? Further restriction of abortion infantilizes women and causes people to question our ability to make conscious decisions about our maternity.  Not  every abortion is inspired by a desire to ensure male progeny and this is the fact that is being overlooked.

The solution lies in rebalancing society so that womens lives become valuable. Education is the only answer to this issue.  Empowering women through education to participate as equals in society will lead to economic freedom.  Women who are capable of supporting themselves and understanding that their worth is not based in their gender, are more likely to make decisions about reproduction that do not include a gender bias.  If women are capable of providing for their families, the overvaluation of masculinity based in their role as providers will reduce.

Patriarchy will latch onto anything that increases their control over womens bodies and womens lives.  While gendercide is terrible, and must be brought to an end, recognizing that are various reasons that one chooses to have an abortion is important, in that asserts that no monolithic woman exists. Not all women are cut out to be mothers, and not all families can afford a new child simply because an egg has been fertilized. Empowerment is the key to brining an end to this travesty, not outlawing a procedure that is essential in allowing women to make concrete decisions about their lives.  The debate need not come down to abortion versus femicide, it can simply be understood as search to find ways to improve the lives of all women.