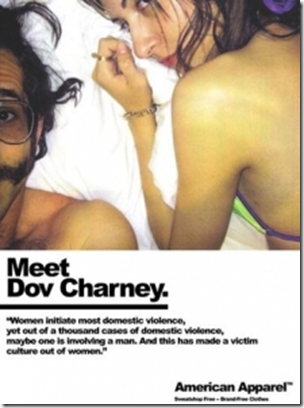 The text reads as follows:

Wow, culture of victimization, isn’t that nice.  I wonder how many battered womens shelters he has visited to see just how imaginary the bruises and the emotional scars are?  Has he purposefully blinded himself to the images in popculture of women being beaten by men?

Had this idiot not been the owner of American Apparel, I would not even have bothered to blog about his misogynist swill.  Clearly the idea that only 1 out 1000 domestic violence cases involve men is pure nonsense.

A 2005 study reported that 7% of partnered Canadian women experienced violence at the hands of a spouse between 1999 and 2004. Of these battered women, nearly one-quarter (23%) reported being beaten, choked, or threatened with a knife or gun. (Family Violence in Canada: A Statistical Profile, 2005)

The most common act of violence against women is being slapped—an experience reported by 9% of women in Japan and 52% in provincial Peru. Rates of sexual abuse also varies greatly around the world—with partner rape being reported by 6% of women from Serbia and Montenegro, 46% of women from provincial Bangladesh, and 59% of women in Ethiopia. (WHO Multi-country Study on Women’s Health and Domestic Violence Against Women, 2005)

In Zimbabwe, domestic violence accounts for more than 60% of murder cases that go through the high court in Harare. (ZWRCN)

Somewhere in America a woman is battered, usually by her intimate partner, every 15 seconds. (UN Study On The Status of Women, Year 2000)

The National Crime Victimization Survey (NCVS) reported 691,710 nonfatal violent victimizations committed by current or former spouses, boyfriends, or girlfriends of the victims during 2001. About 588,490, or 85% of intimate partner violence incidents, involved women. One of every five crimes against women was of this nature - compared to only 3% of crimes committed against men.

The list of facts debunking his bullshit is a mile long.  Across culture and nation states the one truth that is evident is that men are predominately the ones guilty of violently assaulting, raping, and abusing women.  To suggest otherwise is to be in denial of the ways in which patriarchy continually degrades women to support male hegemony.

Charney is using his position as a male of privilege to reinforce this destructive message.   There has been ample evidence of his hatred of women and the only question that remains is what we are going to do about it.   Obviously we cannot hope to change his mind, such misogynists  men rarely come to an understanding of the ways in which their behaviour is not only reductive but dangerous.  If he cannot be taught to respect women, he can still be brought to heel by a boycott of his stores.  What human decency he did not learn in socialization can be force fed through economic sanctions.

We often see something sexist, rail against it and then move on.  It is time as women that we begin to recognize that even though we earn so much less than men, we are still responsible for a great deal of the economy.  We need not spend our hard earned dollars to enrich a man that clearly hates women. Often times when we are confronted by sexism, negative reprisals forestall any form of active protest however in cases like this, it is well within our power to let this asshat know that there is a penalty for displaying such naked hatred of women. He should not profit from our labour and demean us with his MRA style misogynist lies.   So now that you know, spread the word and remind people that sometimes refusing to purchase something can also be a positive form of protest.

H/T Rage Against The Man-Chine


Update: Apparently there is some conjecture that the ad itself may not be real, however the quote that is used has been verified. Apparently Dov said this in an interview with Jon Meyer of the McGill Daily.