Brown In The Land Of The Maple Leaf: An Excuse For 3 BC Officers To Beat A Man 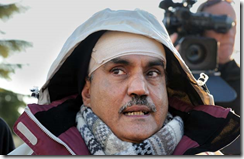 Racism alert in the great white north again.   Imagine yourself lying on the concrete screaming for help,  as three assailants rob you of two hundred dollars and then beat you mercilessly?  How many times would this horror  increase if they these men, your attackers, were three off duty police officers?  For (Frioz) Phil Khan this nightmare was a reality.  I know that it is hard to believe that this occurred in the supposedly colour blind society that Canada has evolved into.

Khan is quoted by the Vancouver Sun as saying, "That was the day I was delivering, when president Obama was elected as the U.S. president. They told me that we don't like brown people. And I told them I am sorry"  Imagine having to apologize for the colour of your skin.

He continues on to say, “To my knowledge, I have been beaten, first by one person, and then later by another two," said Khan, who has worked for Dolphin Delivery for seven years. "In total they were three. They kicked me in my head, kicked my back, legs, everywhere.They told me, “We are the police, you don't need help. If you don't behave, if you don't do anything, we have a Taser,'" Khan said. "I told them that I am half-dead anyways, after you guys beat me up so badly, so you might as well use the Taser and then kill me so that's the end of the story”

Yash who was a witness to the event said, “Three people were beating one guy, and the guy was crying very loudly, 'Please help me. They are going to kill me,'"

These are the men that are supposed to protect us from danger, yet at times it seems that a POC has more to fear from the police than the so-called criminal element.  Of course the blue wall has been dropped.  “No charges have been laid against the three junior officers from the New Westminster, West Vancouver and Delta police forces. Those forces are also currently conducting internal police conduct investigations.”  The one Delta officer involved has been reassigned to desk duty.

Earlier in a post I wrote about Oscar Grant I spoke about my desire to teach my children to be wary of the police and was chastised by one commenter.  The reality of the situation is, if you live in the western world and you have brown skin, you are viewed as a person of little value.  It does not matter whether or not you have friends and family that love you and count on you.

Canada has an international image as a peace keeper which belies the history of violence that has occurred to turn this into our home and native land.  Racism is very much a part of the social conversation in the US and in Canada it is our dirty little secret.  While we point fingers at other human rights violators we conveniently forget the our reservation system was the model for the Nazi concentration camps.  When the police officer in question told Khan that he did not like brown people he was in the company of many Canadians who through the course of history have worked hard to obliterate POC.

We don’t talk about the lack of African Canadian classes on university campuses, the fact that media continually constructs black males as the major threat to safety and law and order, the difference between the schools in poor areas versus the shiny white suburbs, the lack of melanin in our government, or the almost complete erasure of POC in all avenues to power.  Canada is perceived as white because internationally we are represented by whiteness and at home whiteness silences and punishes all voices of dissent.

Even if racism has not been erased by the Obama presidency it has at least been the genesis of conversations that need to occur to destabilize white hegemony.  In Canada we just point southward with a false air of superiority denying the ways in which certain bodies are privileged.

Our big focus is the division between English and French speakers, with the understanding that all sides are represented by whiteness.  Of course it is all drowned out with the salad bowl anthology, sure you can keep your culture here – The real Canadians don’t want you to identify as a maple syrup swilling Cannuck anyway.  We speak about multiculturalism like it is a privilege in our schools and our institutions, yet it is just another one of the insidious ways in which whiteness holds power firmly in its hands.

These officers picked Khan because they knew that a man with brown skin isn’t considered a real Canadian anyway.  White lives  are the only lives that we bother to count.  Watching the evening news one can hear the daily tally of injuries and deaths of Canadians in Afghanistan, somehow they never bother to mention if any Afghanis were killed.  Oh well they’re only more brown people … And so it goes, more denial; croutons for the great salad anyone?